We rounded up some of the internet's best recommendations, from barbed wire to lube to, um, Cheez Whiz. 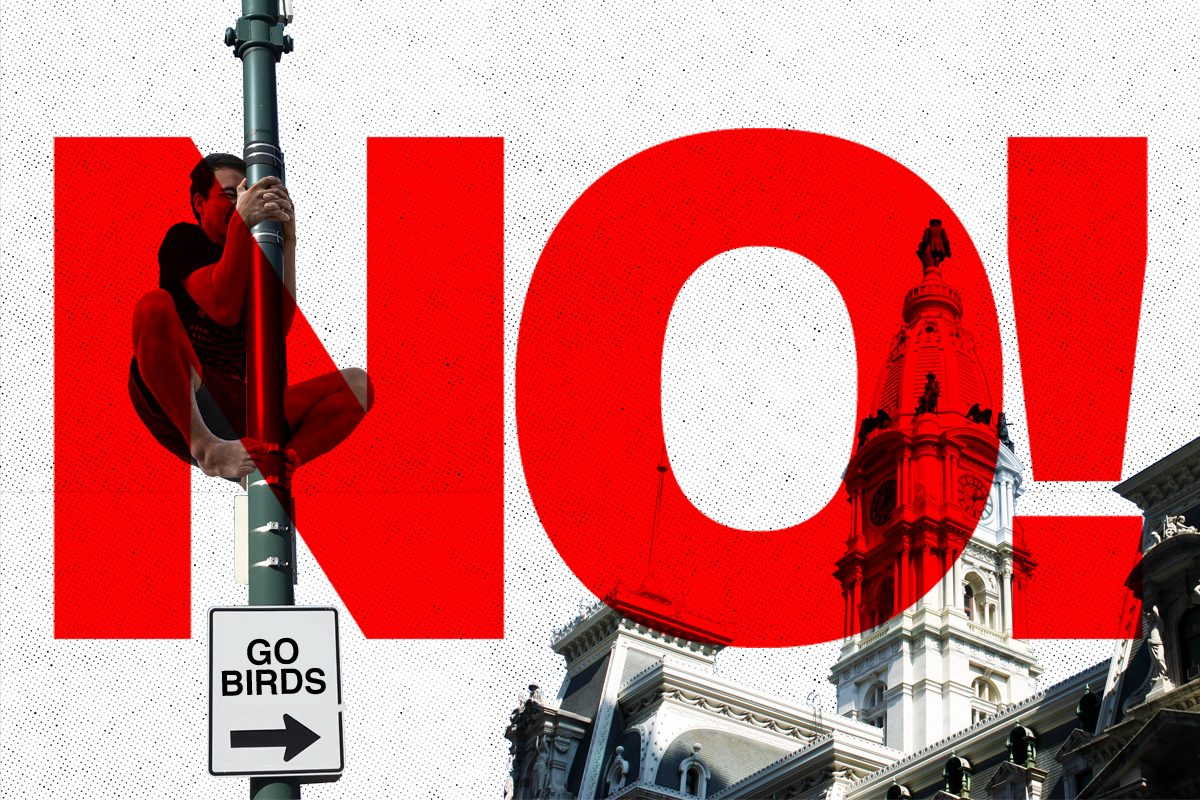 On Tuesday, we told you that Philly police won’t waste any more time or Crisco by greasing light poles ahead of the Super Bowl.

Apparently they’ve got another trick in store: gear oil. We hear it feels like molasses, smells like death, and stains like nothing else. (So you might want to think twice before rising to the challenge in your favorite Eagles jersey.)

Gear oil doesn’t sound very fun, but we love the creativity going into attempts to deter even the wildest of Eagles fans from scaling the city’s streetscape. We’ve compiled a list of several other things (with the help of Twitter) that might do the trick. After all, everyone loves a good challenge.

This is, by far, the most suggested option on social media, which perhaps says something sinister about Philly. Or maybe it just says Patriots and Vikings fans are offering their unsolicited advice.

Again, an ugly but popular option.

Unless its barbed wire, it's not stopping anyone.

We’re not sure whether or not Philly police will accept based on their Twitter reply:

New Orleans grease poles with vaseline …. they do it every single year during parade time so i believe it works best. (Not that I'm an expert on vaseline or poles…lol)

We’re thinking baby. Or vegetable. Or coconut. Or canola. Or olive. You name it. Bonus points if you pair it with vinegar – a classic combo.

May we suggest the oil and vinegar combo used on hoagies? #hoagies #eagles #Philly #Crisco https://t.co/CkDaOsl7hs

STAND DOWN, CRISCO COPS. This sounds like a job for olive oil https://t.co/4u4XGVR4uO

Admittedly, we’re not sure if this will deter or attract Eagles fans.

Philly should be using cheez whiz on those poles smh

The Philly polegrease department really be wildin if they thought Philadelphia was going to be stopped from climbing poles by some Crisco. That jawn is the third goddamn ingredient in cheese whiz, fam!

Poles should be lathered in cheese whiz

Could be difficult and time-consuming – but probably very effective.

(For the record, that tweet is a joke. Police are not actually considering this option.)

You’d have to think twice before committing to scaling that light pole.

Instead of greasing the light poles, we should put some glue up there. Let Phillies fans sit out in -35 degree weather all night.

The forecast low on Sunday is 33 degrees Fahrenheit. Maybe that’ll be enough to keep even the most daring of Eagles fans off the city’s light poles. Maybe.

And finally, the answer to the question you’re all secretly (and regrettably) wondering:

Getting ready to celebrate a Super Bowl appearance. pic.twitter.com/uuKV1RVL7Y