A Q&A with the Democratic candidate for lieutenant governor. 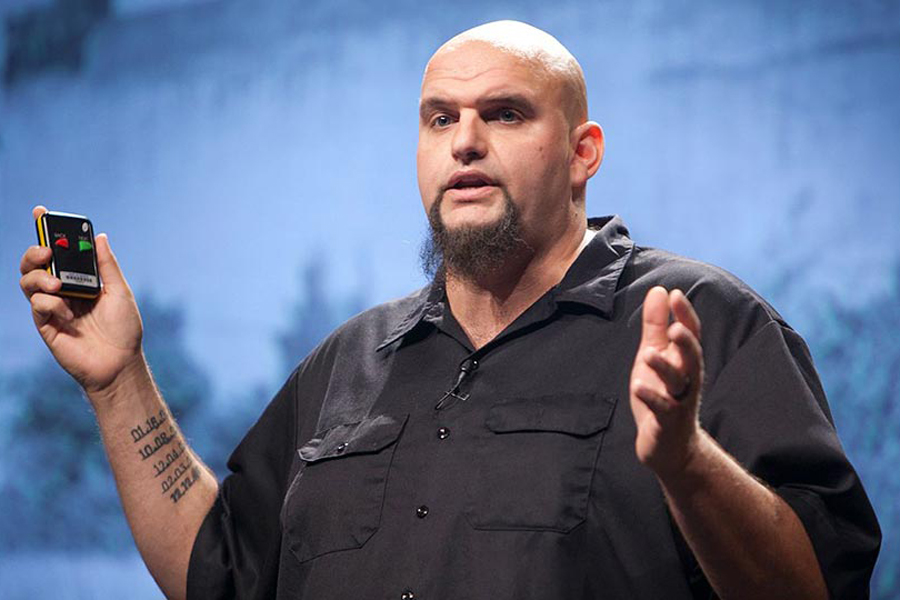 If you don’t know John Fetterman by now, you should. A physically striking man often clad in black, Fetterman is not exactly someone you’d expect to identify as a progressive Democrat if you saw him hanging out at the Reading Terminal Market, like he was on Wednesday. But this jolly man with the heavy-metal goatee was a Democratic candidate for the U.S. Senate in 2016 and has been the mayor of a small town near Pittsburgh for the past 12 years — and now he wants to be your next lieutenant governor.

Just as looks may be deceiving, don’t hold the fact that Fetterman is a Sheetz guy against him. Because he lives and breathes the heated convenience store debate like we do, Fetterman understands if his preferred choice is a deal breaker for some folks on this side of the state. “If that costs me the election, so be it,” Fetterman says with a laugh.

With incumbent Democratic Lt. Gov. Mike Stack being a local boy, can this Steelers fan gain enough ground with us Philadelphians to assume the position of Pennsylvania’s second-in-command? We spoke with Fetterman to hear why he believes he deserves your vote.

First, I have to ask what you plan on eating at Reading Terminal.

Tommy DiNic’s. Honestly, that was one of the things I was most looking forward to getting on my trip to Philly. I literally dream about that roast pork sandwich, and I’m not ashamed to admit it.

Tell me about your history with Philadelphia.

Philly is a great town, obviously. I hope you guys get a Super Bowl ring, I really do. I marvel at the juggernaut the Eagles seem to be this year. This is a place I have nothing but fond memories of — shaking a mile of hands at the Bernie rally at Temple. We had our largest [Senate] campaign event here in Fishtown. I don’t want to say it’s great to be back since I’ve been back several times since the campaign and it’s always a pleasure.

So what made you decide to run for lieutenant governor?

Two years ago, I ran for Senate on a progressive slate of issues and a lot of the outcomes we were able to generate on a smaller scale in Braddock. We didn’t prevail, but we performed well. This idea of achieving on a larger platform stayed with me. I asked myself one simple question: Where do I believe I could be of best service? After talking to my family, we just decided that it was worthwhile to do this.

If I’m from Philadelphia, why should I vote for the mayor of Braddock, a Steelers fan?!

This is not an east-versus-west thing. It’s about electing someone who cares about core Democratic and progressive principals. Progressive is great, but progressive with results is better. All I’m going to say is I have a solid 12-year record as mayor.

Trump won Pennsylvania, and you were critical of him in your candidacy announcement video. What do you have to say to Pennsylvanians who voted for the president and still support him today?

The election was very personal to me. He used a small steel town like mine as a prop. I was appalled. Trump made an appeal to a lot of people who were understandably disenfranchised, and what I would say to voters is you’re right to feel anger and frustration. But it’s better to redirect that into positive rejuvenation like we’ve had in Braddock than to just show up and say ‘I care about you,’ only never to hear from you again.