Philly Congressman Angers U.S. Soccer Fans — All 11 of Them

"It is of course fitting that 90 percent of my tweets are about immigration reform, health care, foreign policy, and of course, a tweet about soccer is the thing that gets paid attention to." 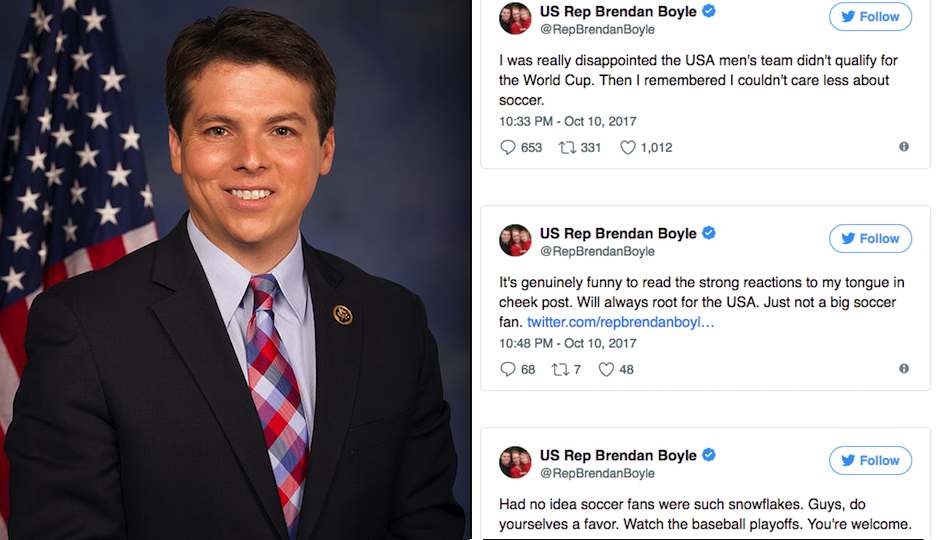 ICYMI, the U.S. soccer team suffered an embarrassing 2-1 loss to Trinidad and Tobago last night, meaning we’ll miss out on playing in the World Cup for the first time since 1986.

But it’s OK, America, because U.S. Rep. Brendan Boyle was there to offer his hot take on the sport last night:

I was really disappointed the USA men's team didn't qualify for the World Cup. Then I remembered I couldn't care less about soccer.

And then he learned that you should probably never offend die-hard soccer fans. Even if there’s only, like, 11 of them:

Run around for 90 minutes.
Flop when barely touched.
Score 1 goal at most.
Do I got it?
;)

You look like the sort of lad who couldn’t run around for 5 minutes, let alone 90. You’ve never watched the world game so you know nothing

We spoke to Boyle on the phone this morning, probably while he was still receiving more angry Twitter mentions and even a call for his removal from office. Boyle said he was just having “a little bit of fun,” and that he’s come to learn that soccer fans are “a bit of a defensive bunch.”

Had no idea soccer fans were such snowflakes. Guys, do yourselves a favor. Watch the baseball playoffs. You're welcome.

“I’m representative of a typical American sports fan in that I will watch the World Cup to root for the U.S., and then once the World Cup is over, and the U.S. is out of it, I generally don’t pay attention to soccer until four years later,” Boyle said.

“The fact that I am not a big soccer fan, and the fact that soccer today is not one of the major sports the way baseball and football are, I don’t think that should detract from others who love it,” he added. “If someone weren’t a big NFL fan, that wouldn’t detract from my enjoyment of watching the eagles on Sunday.”

It's genuinely funny to read the strong reactions to my tongue in cheek post. Will always root for the USA. Just not a big soccer fan. https://t.co/g75zX3uzsf

Without the USA in the World Cup, the ratings in 🇺🇸 will tank. People will watch to see how 🇺🇸 does. Otherwise couldn't care less.

I am totally the reason why the world hates us. 100% me. My bad. https://t.co/CtgrGgjUIn

On the other hand, Boyle said, if the Philadelphia Union were playing in their championships, he’d definitely watch that. He’d probably also tune in to the World Cup if Philly hosted the game at the Linc in 2026 (which it might).

In the meantime, it’s back to policy tweets for Boyle.

Congressman Boyle is standing with working families and against Donald Trump's agenda. Will you stand with Brendan? https://t.co/BNFGMmxbPI pic.twitter.com/Tq8p8EWSsr

“It is of course fitting that 90 percent of my tweets are about immigration reform, health care, foreign policy, and of course, a tweet about soccer is the thing that gets paid attention to,” Boyle said.

He’s probably right about that one.

If I wanted to sleep, I'd just listen to your policy initiatives…