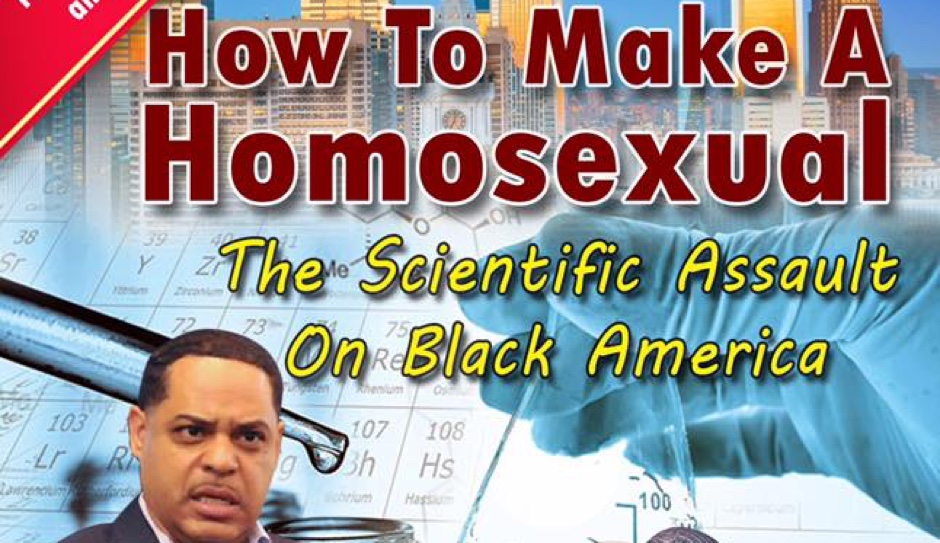 Promotional social media material from the now-canceled “How to Make a Homosexual” event featuring Wesley Muhammad.

Controversial self-proclaimed “phenomenal young scholar” Dr. Wesley Muhammad was scheduled to give a lecture in Philly on Saturday that he markets online as being “the lecture that Facebook and YouTube banned.” In “How to Make a Homosexual: The Scientific Assault on Black America,” Muhammad claims the “Homosexualization of the Black Community is one of the clearest and most egregious illustrations of the US Government’s Scientific Assault on the Black Man.”

He officially announced the event on Facebook to his more than 30,000 followers on Monday, October 2nd:

But as of Wednesday night, G Philly was exclusively informed that he has been “uninvited” from giving the lecture.

According to a statement sent to G Philly, organizers of the conference were not even aware that Muhammad would be discussing the topic:

“The unapproved flyer created by Dr. Wesley Muhammad was recently brought to our attention.

For clarity sake, we would like it known that this was not the original topic agreed upon with Dr. Muhammad.

As of the time this story was published, posts on Muhammad’s various social media platforms suggested he would still be attending:

While you are praying for the white concertgoers of Vegas: The Homosexualization of the Black Community is one of the clearest and most egregious illustrations of the US Government’s Scientific Assault on the Black Man. Join us in Philly this weekend at the Locks Conference as we document this charge.

Muhammad has been in the news over the past year for his unfounded theories about the government having a hand in putting CTH in marijuana, which he argues is “feminizing the black man.”

In a recent online interview with VladTV, Muhammad defended his belief that the government altered popular brands of marijuana to “control black males” as a response to urban rebellions in the 1960s:

“Of course we are disappointed in the development,” Muhammad told G Philly. “We believe that the information that we were prepared to present at the this years Locks Convention is critical to any discussion on Black Wholistic Health. Nevertheless, we encourage our people to support the 23rd Annual Locks Convention as well as the 24th, the 25th, etc.”

UPDATE: Muhammad released a statement via Facebook to his followers confirming that he was uninvited from the conference and will still give his lecture at the Muhammad Mosque #35 in Wilmington, Delaware: