Here Are Details on Philly’s Vigil for Las Vegas Victims

City officials and community leaders will participate in tonight’s event. 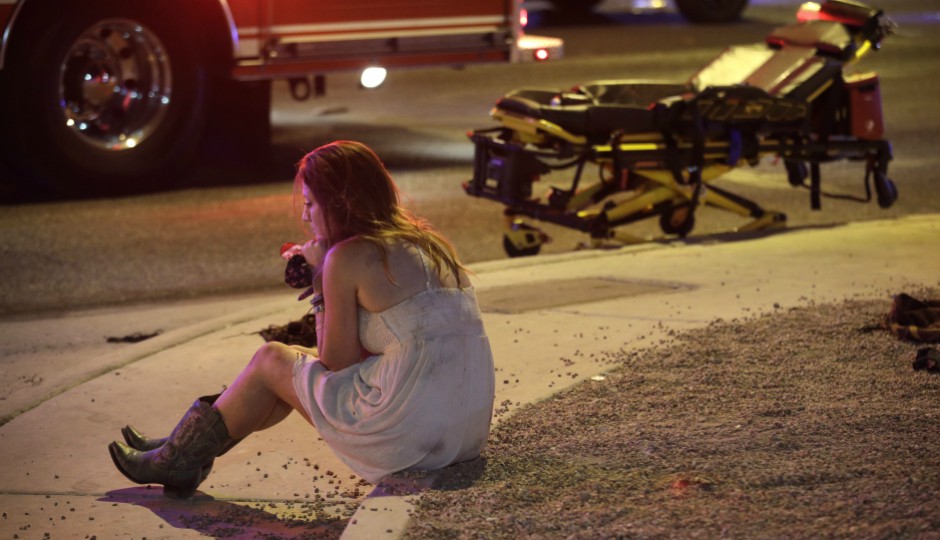 A woman sits on a curb at the scene of the shooting on October 1st. (AP Photo/John Locher)

As the nation reels in the aftermath of the deadliest mass shooting in modern U.S. history, community leaders in Philly are planning a vigil for Las Vegas victims on Tuesday.

Mayor Jim Kenney and other elected officials will take part in the event, which will start at 6 p.m. at Thomas Paine Plaza, located near City Hall and the Municipal Services Building.

The vigil is being organized by CeasefirePA, a statewide advocacy group working to reduce gun tragedies and stop the flow of illegal guns.

We are standing with @CityOfLasVegas alongside @PhillyMayor as well as other elected officials and faith leaders. pic.twitter.com/G6qBCECUC6

Communities everywhere are still absorbing the events of Sunday night, when 64-year-old Stephen Paddock of Meqsuite, Nevada, stood on the 32nd floor of a casino and unleashed streams of gunfire into a country music festival crowd of about 22,000 people, killing at least 59 and injuring more than 500 before taking his own life, police say. His motive is not yet clear.

The tragedy comes 16 months after what is now the second-deadliest mass shooting in our nation’s history – the massacre at Pulse nightclub in Orlando, which left 49 dead and roughly 50 injured. In 2017 alone, according to the Gun Violence Archive, there have been more than 270 mass shootings in the U.S., where citizens make up 4.4 percent of the world’s population but carry nearly half of the civilian-owned guns around the world, per the Guardian.

CeaseFirePA has long called on elected officials to enact stricter gun control, especially in the wake of such tragedies.

“Last year, it was Pulse,” Shira Goodman, the organization’s executive director, told Metro. “This year, it’s Las Vegas. This doesn’t happen anywhere else. This is preventable. This is not how we need to live.”

In a statement on Monday, Clarke said he was “angry that the wealthiest and most powerful nation in the world cannot muster the political will to regulate the manufacture, sale, and trafficking of deadly weapons.”

“Most people have no business owning a weapon manufactured for war — let alone ten, as were reportedly found by law enforcement in the gunman’s hotel room,” the statement continued. [Officials now say Paddock had at least 23 firearms in his hotel suite.]

Tuesday’s vigil for Las Vegas will run until 8 p.m. A Facebook page for the event can be found here.