Other state and local pols also weighed in on the deadliest mass shooting in United States history. 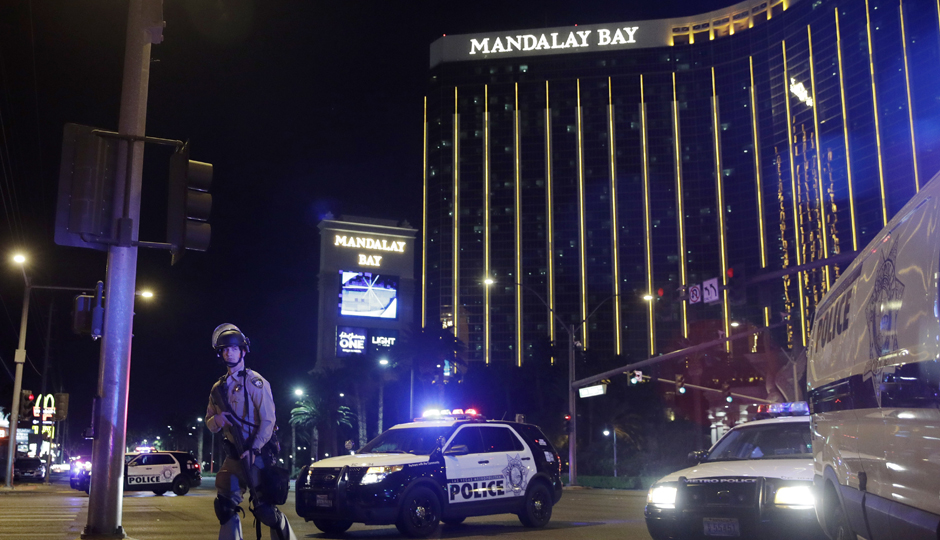 Police officers stand along the Las Vegas Strip the Mandalay Bay resort and casino during a shooting near the casino, Sunday, Oct. 1, 2017, in Las Vegas. (AP Photo/John Locher)

Politicians at both the state and local levels have offered their condolences in response to last night’s tragedy in Las Vegas, the deadliest mass shooting in United States history.

Authorities in Nevada say 64-year-old Stephen Paddock fired hundreds of rounds at attendees of an outdoor country music concert from his room on the 32nd floor of the Mandalay Bay Resort and Casino, killing nearly 60 people and injuring hundreds more before reportedly taking his own life. More than 500 people were hospitalized following the incident, which the FBI has said was in no way tied to international terrorism despite the Islamic State claiming responsibility for the massacre.

Pennsylvania Gov. Tom Wolf issued a statement on Monday morning that championed the “helpers” who risked their lives for the sake of others:

“Frances and I are praying for the victims, their families and all those in Nevada who awoke to sadness and fear that few can fathom. Reports suggest this was a lone actor, but state and local law enforcement are monitoring the situation out of an abundance of caution.

“Each time — too often lately — when I learn of a mass causality incident like the shooting in Las Vegas, I’m reminded of the words of a great Pennsylvanian, Fred Rogers, who said “Look for the helpers.”

“Last night in Nevada, concertgoers experienced pure evil. Yet, despite the unimaginable terror and horror, we saw so many helpers. Police officers, some off-duty, who ran towards the shooter. Victims who stayed with the injured amid gunfire to try to keep them alive. Ordinary citizens who helped victims find shelter or get medical help by driving strangers to the hospital.

“Today, let us all seek the strength of these helpers who put others before themselves. We must continue to work to reduce violence and seek ways to better keep our citizens, community gatherings, and first responders safe.”

Additionally, the state capitol in Harrisburg will be lit blue, gold and green tonight in honor of the victims and stand in solidarity with the state of Nevada.

Other pols took to social media to express their shock at what happened on the Las Vegas Strip, while Sen. Bob Casey called on Congress to engage in a “robust debate” regarding the place of firearms in this country:

While we pray for the victims of this horrific attack and their families, it is not sufficient to just offer thoughts and prayers.

Congress must engage in a robust debate about commonsense ways to keep guns, particularly military-style weapons, out of the wrong hands.

If Congress continues to fail its most basic obligation to keep America safe, then these mass shootings will continue to occur.

Horrific shooting. Praying for the victims and their families. #LasVegas

Philadelphia grieves with Las Vegas this morning. It's an unspeakable tragedy for the hundreds of families impacted and for our nation.

Pennsylvania Republican Party chairman Val DiGiorgio had this to say:

“This cowardly act of violence was pure evil. To the people of Las Vegas and all those affected, especially the victims and their families, the Republican Party of Pennsylvania sends its deepest condolences along with our prayers during this difficult time of mourning and recovery.

“Thank you to the brave law enforcement officers and first responders for their decisive actions during this horrific tragedy.”