Hard Fouls and Airballs: Inside My Doomed Tryout for the Delaware 87ers

But former Sixer Elton Brand was impressed by my “gritty playing style.” 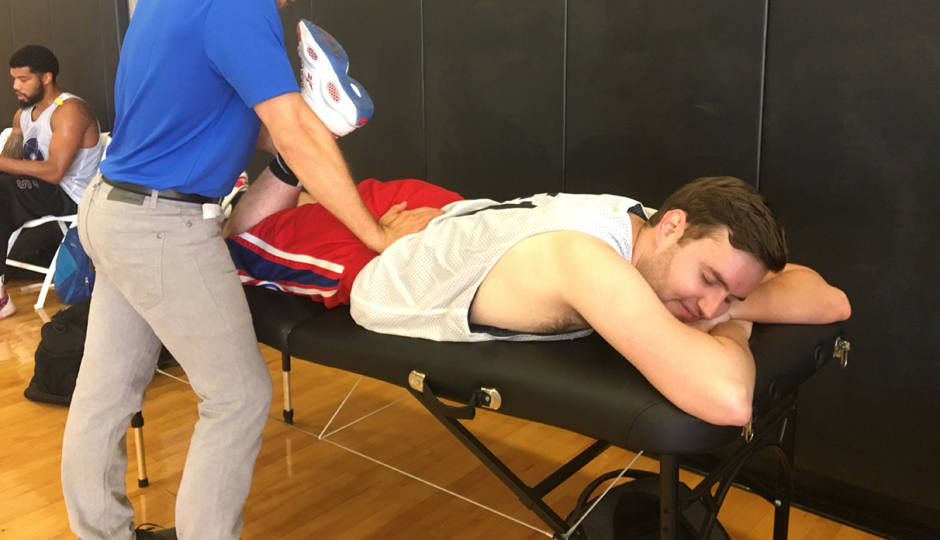 A taste of the pro athlete life.

I don’t know about you, but asinine debates are par for the course among my group of friends – especially when we’re watching sports. One of my favorite (typically booze-fueled) topics of discussion is the highly illogical thought that one of us could perform some sort of minor feat at the professional level. Do you think you can put up a single shot in an NBA game? How about hitting the ball past the infield at Citizens Bank Park?

For example, my friend Teddy adamantly believes that he could gain five yards on one carry in an NFL game, if given the hypothetical opportunity. Absolutely preposterous, but the fact that my buddy played running back at one time makes his incredibly bold statement at least plausible enough to dream – no matter how far from reality. With that spirit in mind, I decided to pick up a basketball for the first time in quite a few years to see if I could hack it with the pros a la Tin Cup.

I’ll admit that I was a little nervous I’d get injured during my tryout with the Delaware 87ers – the 76ers’ fittingly-nicknamed minor league affiliate – and blow my beer league softball season a week before it starts, but this was my chance to put this joke amongst friends to the test. I last played organized basketball in seventh grade at the CYO level. No AAU or traveling leagues for me – basketball was never my sport, I’m afraid. But I did always enjoy playing, and as one of my tryout teammates so eloquently put it on Saturday: “Everybody can ball.”

Being the homer that I am, I toss on a pair of Sixers shorts from 1996 and lace up my Reebok Questions and pray to the Lord of the Lane – Allen Iverson – that nobody dunks on me. At least I know no one will look fresher than me on the court if that is the case. My only regret is that I didn’t ball out in a hat like I was on Rock N’ Jock. 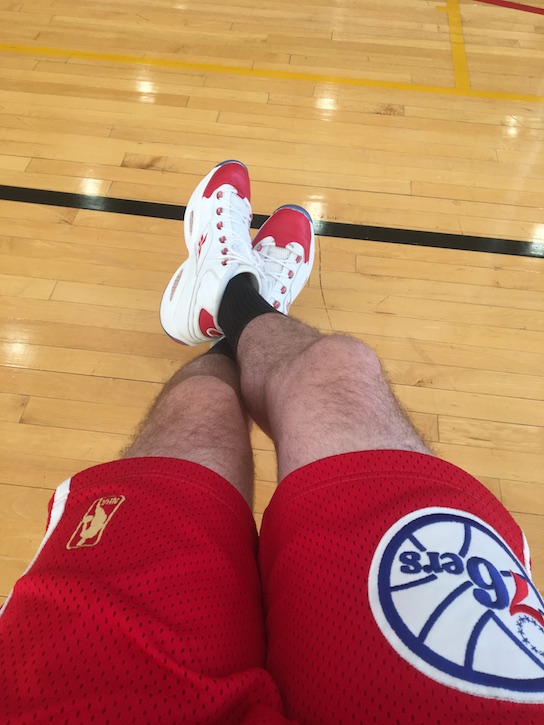 At least my swag was on point.

After picking up my 87ers practice jersey, the very un-basketball number 81, I hit the court at Temple University’s McGonigle Hall – the same building where Owls hoops legends like Mark Macon and Aaron McKie played their home games. My first move is to start stretching – and scope out which layup line would I seemingly be welcome in. All throughout this open tryout, I just wanted to have some fun and was very conscious of not getting in the way of players actually trying to make the team. Some of these guys played Division I college basketball. Sam Cassell’s kid was there. I pick the line with the old playground vet with salt-and-pepper hair wearing running sneakers.

You know what? I gotta say I wasn’t really all that … just kidding – I was by far the worst player on the court and in the worst shape, too. But I did hit a few threes while warming up. (Airballed a few, too). My only strength as a basketball player is knowing that I don’t know my own strength with the rock, hence the proclivity for the three ball. (That, and my love of Glenn Rice’s game). It was my full intention to never venture inside the three-point arc during the 5-on-5 portion of the tryout and jack my shot whenever I got the ball, George Costanza style.

My team was a slapstick bunch that included a Foot Locker sneaker salesman, a few guys who have tried out for various G-League teams in the past and one dude who I’m pretty sure hated me. (See below). 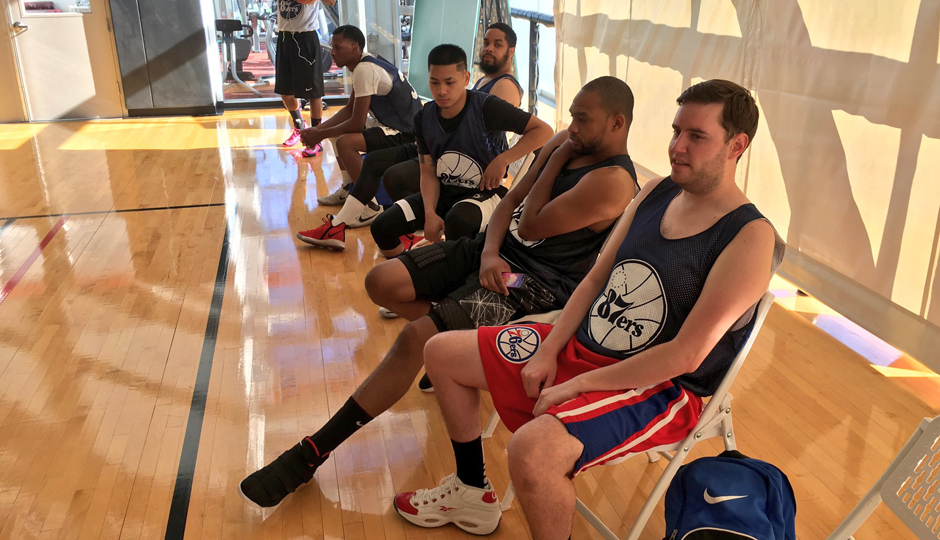 Everybody was very concerned about the “heat on [their] feet,” but my man playing in the ‘80s Reeboks stole the show: 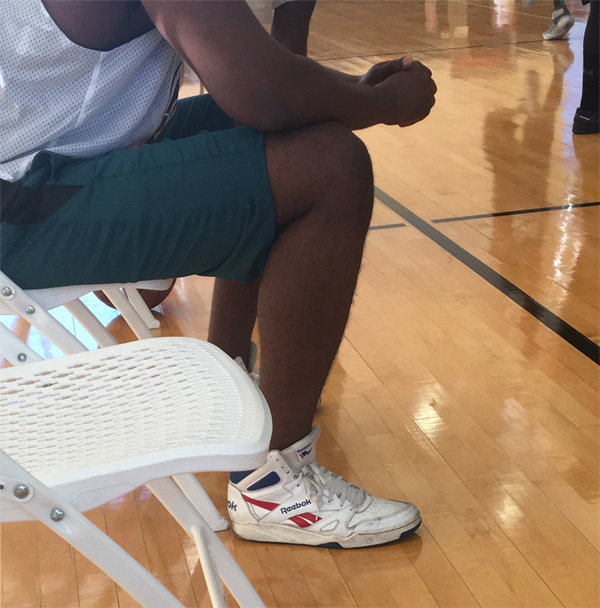 You can’t beat a classic.

Team 15 sat first with all of the courts in use, a move that did not do my psyche any favors as I watched guys execute windmill dunks and reverse layups with ease. When we did get the call that our game was up, we entered with no game plan. The coach was at least smart enough not to start me, but I did sub in rather early for my moment to shine. The thing that struck me about the game was that the pace was much quicker than I remembered. I got the ball twice but unfortunately never was able to take a shot. The first time was in my own end, and with the full-court press on I dished it to an open man immediately. The second time I was at the top of the key but had to pass to evade the double-team.

I would instead make my mark on the defensive end of the floor, talking trash and even impressing former Sixer (and now 87ers GM) Elton Brand with my gritty play. After coming out and subbing in a second time, my teammates very wrongly left me to cover the point guard, who waited with the ball for me to make my move. Never one to back down to a challenge, I go up to guard my man and he hits me with a killer crossover. But instead of going down like a pile of bricks, I recover nicely enough to block his shot on the back end as he attempted to lay it in. TWEET.

The refs called a foul on me, but I know it was all ball. They must’ve felt sorry for the kid, who appeared dumbfounded and embarrassed by the fact that the journalist just swatted him. Next time on the defensive end I get all tangled up in the paint as one player drove the lane, steamrolling in my direction. I rise up to meet him, and this time I absolutely drop him with an unintentional hard foul – thus ending my brief career as an 87ers hopeful as I motion for the coach to take me out.

“You got crossed up at the top, but you moved your feet and hung in there,” Brand said of my play. “I was proud of you. Hacking dudes and giving those hard fouls.”

And with that, I would like to officially announce my retirement from professional basketball. Guess I’ll just stick to writing about sports and pretending that I have what it takes to go up against pro athletes, when obviously I can’t even compete with the wannabes. Oh … and Ted … there is NO WAY you could gain five yards in an NFL game, dude!