The Philly Routes to Avoid When You’re Avoiding Drunk Drivers

You might want to use caution traveling between the Linc and Center City on Sundays, per a new map that reveals DUI arrests in the city. 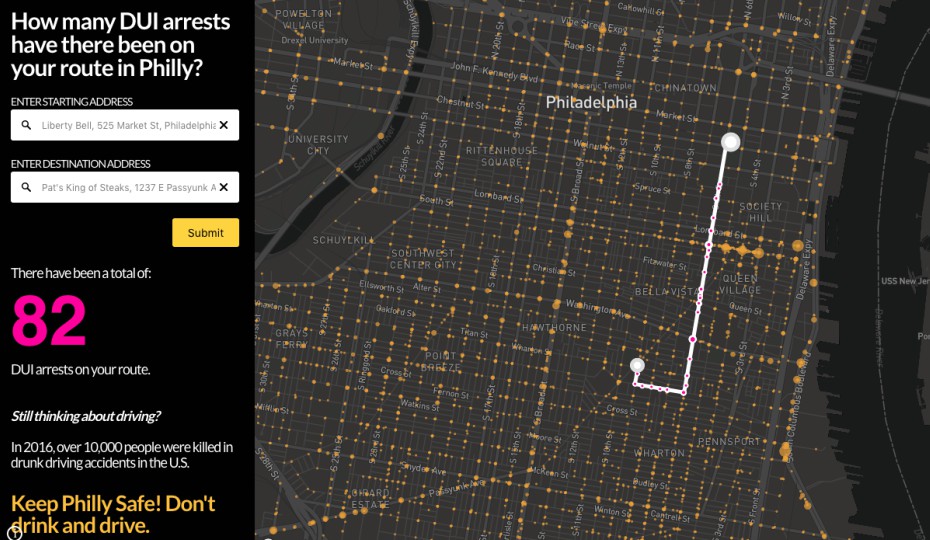 A new interactive map might change the way you see Philly’s streets.

The map, released last week by Center City-based personal injury law firm Anapol Weiss, allows you to see how many DUI arrests occur from point A to point B anywhere in Philly.

That means you can track your drive home from the bar, or your route from the game to the bar or vice versa – or literally anywhere you might be curious about, like City Hall to the art museum (65 arrests, per the map), Citizens Bank Park to the Chickie’s and Pete’s on Packer Avenue (37) or the Liberty Bell to Pat’s and/or Geno’s (about 82).

The map includes the more than 53,720 DUI arrests recorded in Philly between 2006 and 2016 and was compiled using government data.

Andrea Rodriguez, a data visualizations specialist who worked with Anapol Weiss on the project, said the firm noticed a large concentration of arrests between the sports stadiums in South Philly and Center City.

The firm recently released a warning advising football fans to celebrate (or mourn) responsibly this season. According to data used for the map, 8 percent of the total arrests included in the map occurred on Sundays during Eagles seasons. Rodriguez said arrests are typically more common during weekends, but the firm noticed that they spiked even more when sports seasons were in full swing.

The goal of the map, Rodriguez said, was to present concerning data “in a way that was more easily digestible for readers.”

You can find the map on Anapol Weiss’s website. For strategies on how to reduce or prevent drunk driving, check out these sources via the CDC.