The new sculpture is just steps away from the controversial bronze. 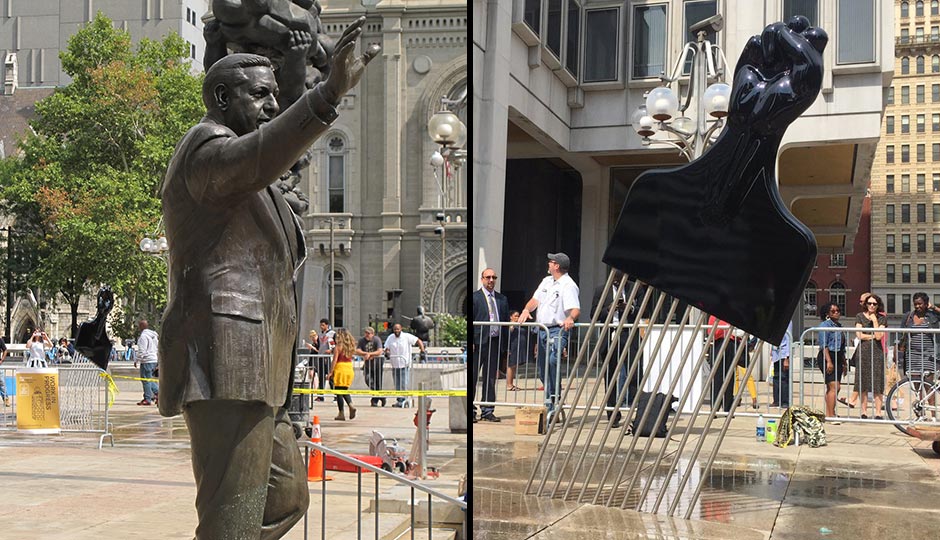 The Thomas Paine Plaza, home of the city’s contentious Frank Rizzo statue, welcomed a new monument on Tuesday afternoon: an eight-feet-tall, 800-pound pick with a handle that doubles as a Black Power fist.

The piece, All Power to All People by Hank Willis Thomas, was commissioned by Monument Lab, a public art and history project produced by Mural Arts Philadelphia.

Its debut comes in the midst of a citywide and nationwide debate (prompted by the violence in Charlottesville last month) surrounding how we define monuments – a dialogue at the heart of the work at Monument Lab.

“All Power to All People” stands several yards from the Rizzo statue, which, in the last few weeks, was tagged with “Black Power,” egged, and brought under harsh scrutiny following a renewed push for its removal from Black Lives Matter activists and City Councilwoman Helen Gym, among others.

Those who want to take down the monument claim Rizzo’s divisive legacy includes enacting brutish law enforcement tactics that targeted people of color and the LGBTQ community. The efforts to take down the statue – and the resulting backlash – have prompted the city to put out a call for ideas for the statue’s future. (The deadline for the call ends on September 15th, and the Art Commission will likely make a decision as to what will happen to the statue sometime in October.)

Monument Lab was created in 2015 with a central question in mind: What is an appropriate monument for the current city of Philadelphia? The organization, per its website, aims to spur conversation about “history, memory and our collective future” by installing temporary monuments by 20 artists across 10 iconic sites in Philly this fall. The structures, as evident in Tuesday’s installation, are meant to be site-specific artworks that “address issues of social justice and solidarity, including matters of race, gender, sexuality, class, and national belonging.”

Farber said the organization worked with Thomas to select the site of the pick almost a year ago – long before the Charlottesville rally reignited the debate over Rizzo.

“The conversations were separate,” Farber, who leads Monument Lab’s curatorial team, said at the unveiling on Tuesday. “But they have a lot to do with this space, right in the city. This is a place where we have, for decades, experimented with art.”

Farber said Thomas was inspired by several monuments in the plaza, including the famous Clothespin, Government of the People, and, of course, the Rizzo statue.

Thomas, a New York-based artist with strong ties to Philly, said in a press release that the piece is meant to “highlight ideas related to community, strength, perseverance, comradeship, and resistance to oppression.”

The statue is one of 20 being unveiled by Monument Lab this fall, through November 19th, at iconic sites and neighborhood parks in Philly, including City Hall, Rittenhouse Square, Malcolm X Park and more.