OPINION: Now Isn’t the Time for Marginalized People to Compromise

How the fruits of Caitlyn Jenner’s Trump complicity serve as a lesson for groups representing people of color in the Gayborhood. 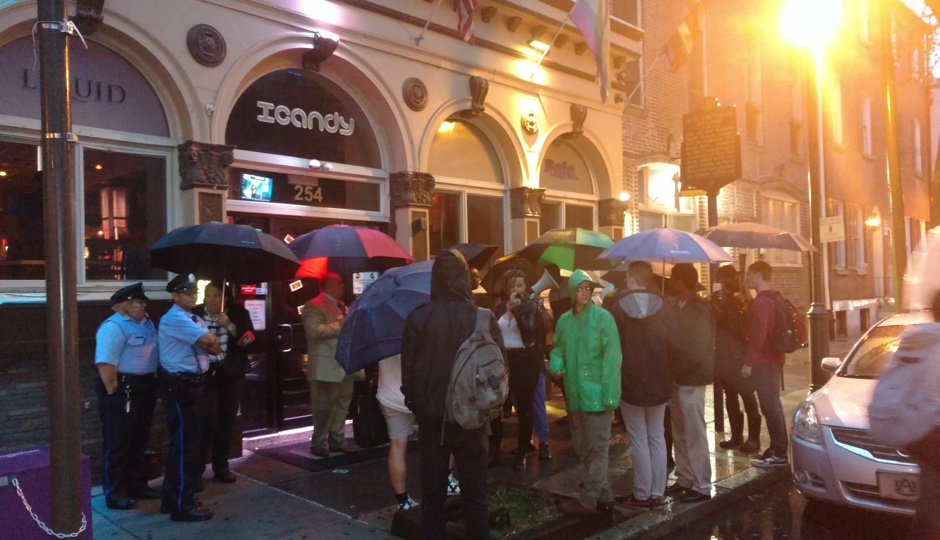 Protest outside ICandy nightclub on September 29, 2016. Photo by Ernest Owens.

This week has shown marginalized communities that our adversaries are still alive and well. On Wednesday, President Trump announced plans to ban transgender individuals from serving in the military. As most of the LGBTQ community looked at this as another of his assaults on our rights, one member of the community seemed startled.

Caitlyn Jenner, the famed transgender advocate who often bragged about having the ear of the Trump administration on LGBTQ issues, publicly tweeted Trump her newfound dismay:

There are 15,000 patriotic transgender Americans in the US military fighting for all of us. What happened to your promise to fight for them? https://t.co/WzjypVC8Sr

Many of her followers chastised her for seriously believing anything the president has said, with one person tweeting at her: “Caitlyn sweetie we BEEN trying to warn you and your privileged ass continued to vouch for him. I’m supposed to feel bad? I don’t.”

But how is it that some within our community still can’t comprehend the importance of solidarity in such dire times? Is it their personal privilege that shields them? Or is it that coupled with self-interest?

A similar dilemma occurred in our local community when a member of the LGBTQA People of Color Community Social Engagement Committee announced on Instagram that the black LGBTQ-based organizations COLOURS, Philadelphia Black Pride, and Social Life Entertainment have been “working intensively with ICandy night club to create a safer space” in arrangements that stand to benefit their organizations: 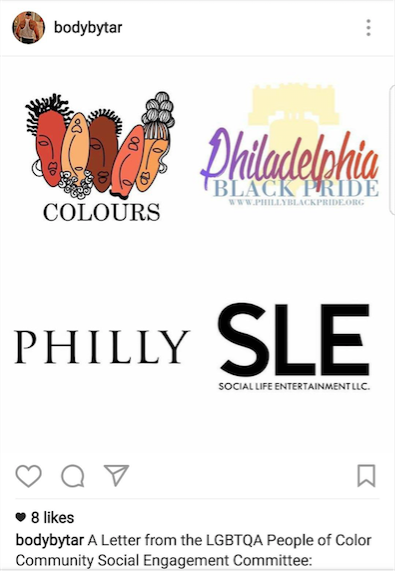 Now deleted public Instagram posts of a statement from a member of the LGBTQA People of Color Community Social Engagement Committee. 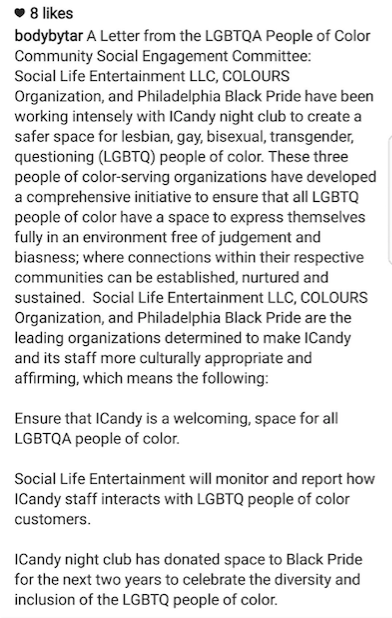 The once-public posts were deleted after social media criticism from black and brown members of the community. I was one of those harsh critics, completely unable to understand why any organization for black people would want to partner with an establishment that has a history of alleged racial discrimination and a white owner who once referred to black patrons as “niggers.” Regardless of how hard ICandy tries to rebrand itself to get black dollars back into the joint, one cannot transform a space many perceive as being racist into a “safe space” — especially in less than a year.

I spoke candidly with one of the stakeholders involved in the iCandy initiative, who told me simply that since some blacks were already going back to ICandy, they wanted to ensure that these individuals were safe and staff was trained properly. (As if the Philadelphia Commission on Human Relations weren’t currently doing that.) However, it’s one thing to provide outside support for anyone who decides to navigate troublesome tides versus encouraging others to join them. Philadelphia Black Pride accepting two years of free space for black people to return to ICandy is helping to shore up the nightclub’s bottom line and not actually respecting the community’s strong stance on boycotting.

In a Trump era, unrequested donations and staged apology tours cannot alleviate the trauma of racism inflicted by ICandy. Sometimes people who make horrible decisions must accept the consequences of their actions. As long as ICandy is owned by Darryl DePiano, I will never step foot in there or encourage anyone else to. My self-respect means more to me than leveraging access to spaces that have historically shunned me.

Which is why I understand — but still wholeheartedly disagree with — this ICandy arrangement. Let’s get frank: Black organizations in the Gayborhood are still fighting to thrive. The reason we even have a Philadelphia Black Pride in the first place is because people of color in the community have historically never felt fully included and embraced by the general Philly pride celebration. COLOURS is underfunded compared to other HIV/AIDS organizations in the community and has to work under a nonprofit incubator. And while Social Life Entertainment is hosting successful black gay parties outside the city, it still has to work within the Gayborhood, where currently none of the bars/clubs are owned by people of color. Fundamentally, it makes sense that these organizations jumped on the rare opportunity to benefit from a white Gayborhood stakeholder. But at what cost is the community’s dignity up for sale when said stakeholder has held views that demean us? Answer: not a damn dime.

What individuals such as Jenner and organizations like the LGBTQA People of Color Community Social Engagement Committee must realize is that compromise isn’t always the best way to support the marginalized. When the stakes are too high and the trauma is too severe, resistance speaks larger volumes. It was resistance that got us to Stonewall, the end of “Don’t Ask, Don’t Tell,” marriage equality, and the city finally passing a law that will put harsher penalties on bars like ICandy that discriminate.

If our adversaries had it their way, they would want us to take the low-hanging fruit they’re offering. We’ve come too far to bite the apple now.