A Celebration of Resilience in a Changed Neighborhood

Much like the culture it celebrates, the Odunde Festival is a testament to perseverance. 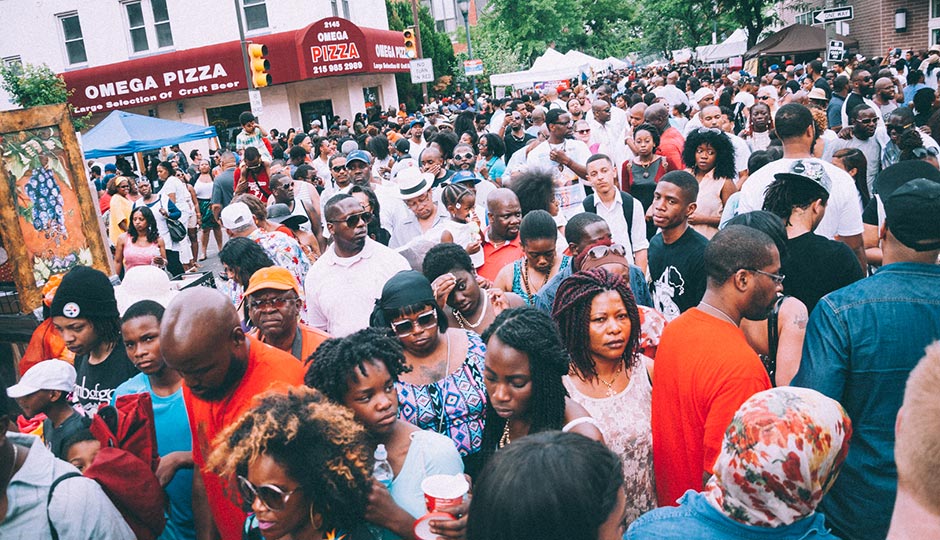 The neighborhood surrounding the intersection of Grays Ferry Avenue and South Street has been named and renamed a few times over the years.

Southwest Center City. Naval Square. Schuylkill Square. South of South. Graduate Hospital. (Or, for the hipsters among us, G-Ho or So-So …)

Thanks to development (or gentrification, if you see it that way), the composition of the neighborhood has also changed as the members of the African-American working class who called it home have been replaced by the kind of people who would actually call their neighborhood So-So and mean it as a compliment.

But for the last 42 years, the intersection of Grays Ferry Avenue and South Street in the neighborhood that can’t seem to decide what it wants to call itself has played host to a gathering whose identity is etched in stone: the Odunde Festival.

For the last 42 years, the second Sunday in June has always meant going to the intersection of Grays Ferry Avenue and South Street to take part in one of the largest and longest-running African-American street festivals in the United States.

Modeled on the Oshun Festival, which celebrates the Yoruba New Year in Nigeria, Lois Fernandez started Odunde as a means of introducing the vibrant culture of Africa to the city where America began.

Sticking to its mission is how Odunde has managed to survive, says Oshunbumi Fernandez, Lois’s daughter and the executive director of Odunde 365, the year-round organization spawned by the festival.

“I think that it’s caught on in Philadelphia because it’s always stuck to its roots,” she says. “We showcase the significance of African-American culture. I believe that you’ll be successful if you stick to you mission. Odunde is a testament to that.”

But it hasn’t been without its challenges.

When the city’s Commerce Department shut down its Marketing, Planning and Community Festival Funding program due to a charter change in 2008, Mayor Michael Nutter declared that cultural festivals would have to start reimbursing the city for the costs of cleanup and police overtime. Fortunately, Odunde had a friend in a very high place.

“Congressman Bob Brady has always been a champion for Odunde,” Fernandez says. “For the last 15 years, he’s taken care of those costs for us through the Philadelphia Traditions Fund. He’s an angel in disguise.”

And although Oshunbumi Fernandez didn’t want to talk about it, Odunde has occasionally had to fight back the impulses of the people who call the intersection of Gray’s Ferry Avenue and South Street So-So without irony.

In 1984, a group of neighbors brought a petition to City Hall to try and get Odunde moved because, they said, it had grown too large for the neighborhood. The city even offered Lois Fernandez money to move the festival to Penn’s Landing, but because the celebration begins with a procession to the South Street Bridge to present offerings to the orisha (goddess) Oshun, that was a no-go.

Instead, the festival expanded, and has grown to include a week of activities that include pottery and yoga classes.

It’s also made sure to let its neighbors know that they are — and always will be — invited to join the fun.

“Odunde is for everyone,” Oshunbumi Fernandez said. “It’s always been for everyone. It’s for every nationality and income bracket.”

This year, the ’80s rap group Whodini will be playing as part of Odunde. Gov. Tom Wolf will be attending the festival, and Mayor Jim Kenney, state Rep. Jordan Harris, and City Councilman Kenyatta Johnson will be honored with community service awards.