Free Speech on Campus, Then and Now

A recent poll found that 69 percent of college students were in favor of some limits on campus free speech. This would have been inconceivable to students in the 1960s and 1970s. 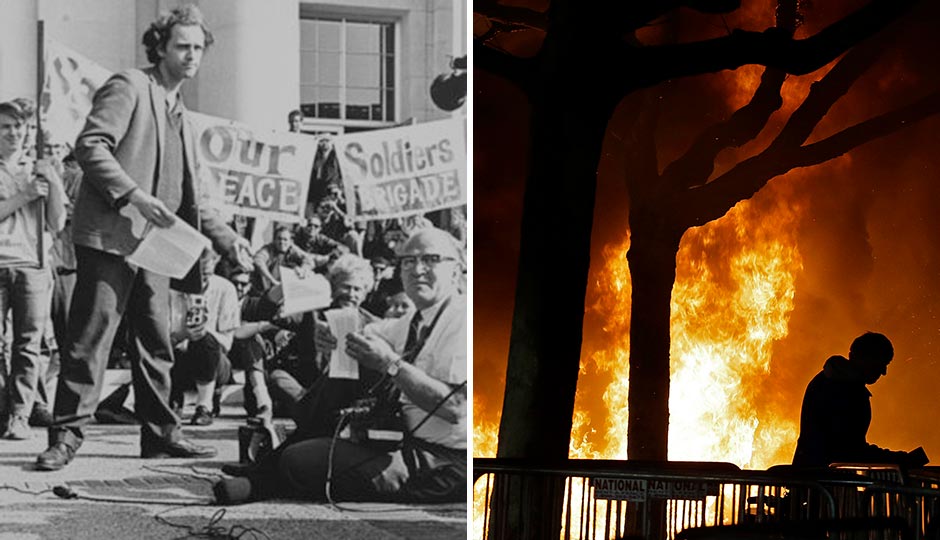 When I attended Philadelphia’s Charles Morris Price School of Journalism, in 1970, America was waging the Vietnam War. Students at that time were either pro-war (a hawk) or pro-peace (a dove). At Price, however, the majority of students were reluctant to take a side: They didn’t want to voice their opposition to the war because peaceniks in those days were often labeled “dirty long-haired hippies in need of a bath.” And sometimes these labels were bestowed by teachers.

When Price teachers would occasionally blurt out a pro-hawk sentiment during class, they would usually accent it with an acerbic anti-hippie comment. Hearing these impromptu attacks was always unsettling for those of us against the war, but we took it in stride. We viewed teacher snits of this sort with a grudging tolerance. Their disapproving words often echoed what we were hearing at home from parents and siblings, yet we never allowed the clash of ideas to bring us to the brink of despair.

But this is no longer true on many college campuses. Today when a college professor voices a view that goes against the prevailing PC canon, students don’t take it in stride — they make their discomfort known by boycott, demonstration, or efforts to get the unorthodox offender fired. Much the same goes for outside speakers.

Two campus speakers who have generated intense student protests this year are former Breitbart journalist/provocateur Milo Yiannopoulos and writer Ann Coulter, a woman Washington Times columnist Wesley Pruden described as “a slender woman who might weigh 90 pounds stepping out of a shower.” Yiannopoulos had a planned February appearance at UC Berkeley canceled after violent protests caused thousands of dollars in property damage at the campus. Coulter, the author of Never Trust a Liberal Over Three and Adios America!, had a talk there canceled in April after threats of more protests. (Yiannopoulos vows to to “bring an army” to Berkeley in September to make sure that conservative speakers have a platform.)

A 2016 Gallup Poll found that 69 percent of students were in favor of some limits on campus free speech if that free speech was upsetting or perceived as “hateful” by some student groups. But that’s not all. At some colleges the latest trend is banning white male poets like T.S. Eliot and John Milton. This would have been inconceivable to students in the 1970s.

There were no space spaces at Price, no padded side rooms with play dough, licorice-flavored binkies or plates of milk and cookies to soothe over a student’s hurt political feelings when a professor said something controversial. There was zero coddling at Price, for instance, when one teacher invited a pro-war colonel to speak to a class or when the school sponsored a “Support the Troops” day — code, of course, for “Support the War.”

Glen Harlan Reynolds, a professor of constitutional law at the University of Tennessee, believes the term hate speech is meaningless because “all speech is equally protected whether it’s hateful or cheerful. “ Yet this solid Constitutional definition doesn’t wash with campus “social-justice warriors,” especially at schools like Swarthmore, Brandeis, UC Berkeley, Smith College, Sarah Lawrence, Bennington, Wesleyan, Oberlin and Sarah Lawrence.

Students in the 1970s seemed to understand that college is a trial run for adulthood. And adulthood, after all, is an Upton Sinclair jungle of clashing opinions and warring ideas. Colleges that seek to protect students from the world of ideas are not colleges at all, but four-year vacation retreats. Better to be “born” a hothouse flower in Longwood Gardens than a human being if you are afraid of honest dialogue.

When a friend and I were named co-editors of the Price school magazine, we were able to respond to our hawk professors with antiwar material. Although many teachers came to object to the magazine’s editorial slant and register letters of protest (which we always printed), we were never called into the dean’s office and told we had to cease publication, although we expected this to happen at any time.

We thought the magazine would be shut down because the fight for free speech then was all-consuming. This was a time when books and plays were banned, when comedians like Lenny Bruce went to jail, when Banned in Boston was more than an archival, historic joke.

Perhaps the strangest twist of all — an example of how one can have respect for opposing points of view — was on Price graduation day, when those same hawk professors awarded us a journalism award for our commitment to the (civilized) exchange of ideas.