A flayed amphibian, a seven-foot-tall cross, and a professor on a crusade. 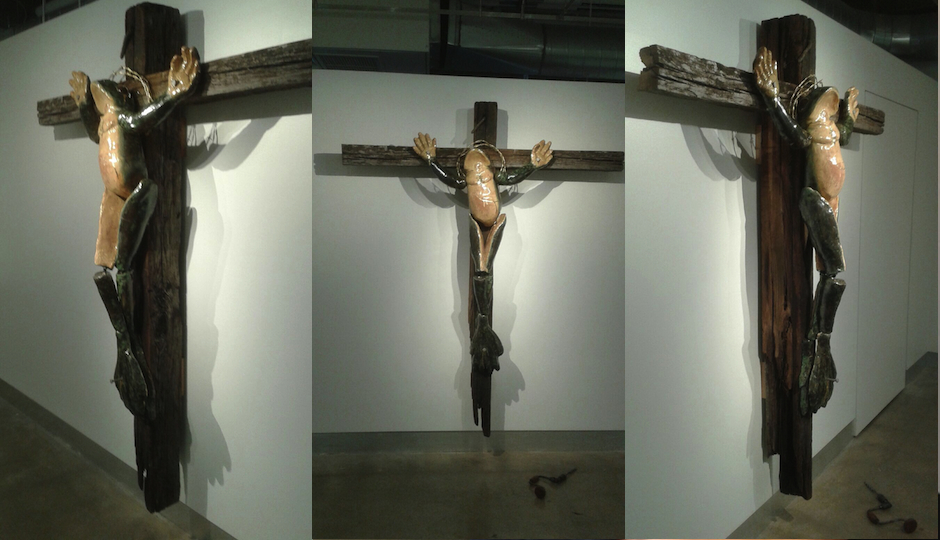 We’re pretty sure that no one has ever written a story before about the art program at Penn State’s Abington campus, but when there’s a crucified frog involved, well, obviously we took notice.

Last week, a new student show, “Jonathan’s Descent,” was hung inside the art gallery at Penn State Abington. The show is part of the school’s interdisciplinary “TransMedia Narratives” program, consisting of a series of artistic creations and a graphic novel that together tell a story.

The centerpiece of the show — or at least the one getting all of the attention — is Christus Ranae, Latin for “Frog Christ,” a seven-foot sculpture of a frog on a cross. The frog is made of clay, and the cross was devised from reclaimed railroad wood. There’s also a barbed-wire crown of thorns around the frog’s head, and gold leaf was used to evoke blood dripping from the wounds caused by the crucifixion. 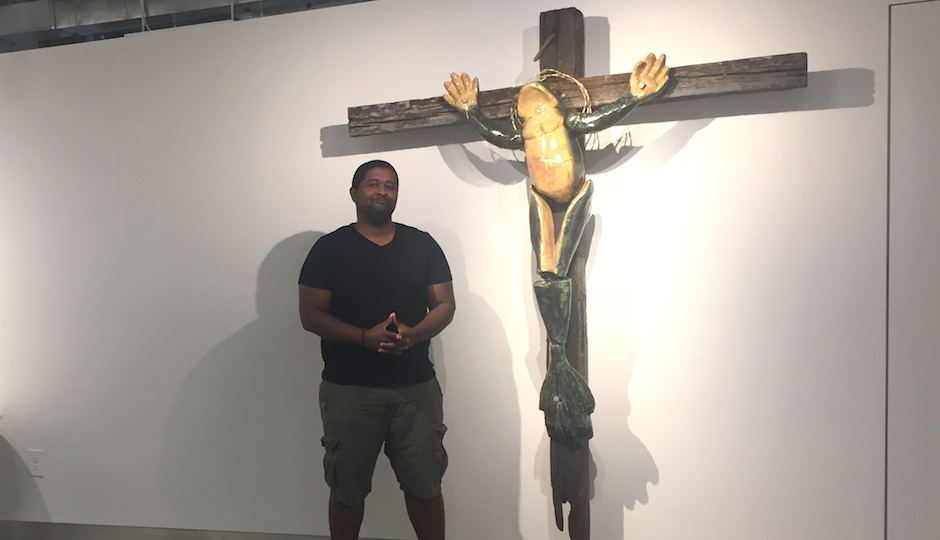 Artist Ashaundei Smith and his crucified frog sculpture at Penn State Abington, where the artwork is the talk of the campus.

Not everybody is singing the Hallelujah Chorus over it.

Some students and staffers have objected to the crucified frog, and leading the charge is longtime Penn State Abington sociology prof Karen Bettez Halnon, who once made national headlines after she was arrested for some rather animated antics on a flight from Nicaragua to Miami. 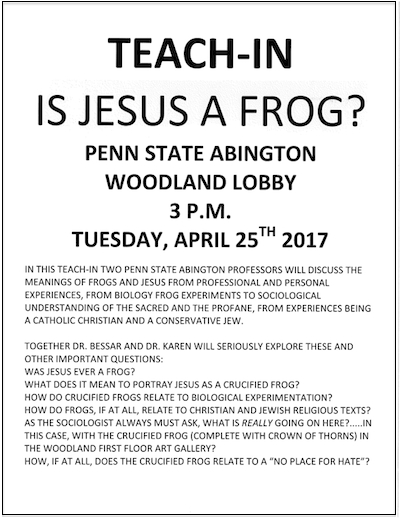 At the gallery on Tuesday, Halnon, joined by Penn State Abington science and engineering professor Marcus Besser and some of the students who took offense to the crucified frog, participated in a “teach-in” protest. The day before, Halnon had distributed flyers (seen here) announcing the event.

At Tuesday’s teach-in, as many as 60 students and faculty members gathered at the gallery to hear some of the objections.

But this is a college campus. Isn’t this a place where students are supposed to sometimes be confronted with things and ideas that challenge their way of thinking and that sometimes, yes, may offend?

“Penn State Abington prominently says and advertises and certifies itself as being ‘no place for hate,’” Halnon says. “Well, this is hateful. If we decided next month to hang up a swastika or hang a transsexual from a rope, then everybody would be crying about it. Or something from Islam. This is all part of the persecution of Christians that is going on in this country right now.”

Smith, a 34-year-old veteran of the United States Air Force, was taken aback when he heard that people were upset with his work, which he says took the better part of a year to complete.

“It’s been really surreal,” he tells Philly Mag. “A lot of people are questioning my intent. I myself profess to be a Christian, and I think the imagery is not offensive — because of my intent.”

Smith, who expects to graduate in 2019, explains how the work is just one part of a larger narrative told by the entire show and the accompanying graphic novel, and his concern is that the people who are outraged by the sculpture aren’t taking it in its full context or taking the time to understand what it all means on a larger scale.

“It doesn’t matter what you intended,” Halnon insists. “The impact is the impact. It’s like with sexual harassment — although the gravity of this is so much greater. It doesn’t matter what your intent is when you sexually harass someone. What matters is how they feel. Similarly, once you release art out into the public, you are responsible for it, and I’m not uneducated in terms of art. I’ve seen it all at the Louvre, Prado, Prague, Boston, London, Oxford and Vatican. But I know anti-Christian sentiment when I see it.”

We reached out to Besser, Halnon’s companion at the teach-in, to get his take on the sculpture. He declined to comment on the artwork itself, but told us that he thought the teach-in was successful.

“This was an excellent opportunity to think about the hard questions,” says Besser. “And the hard question I had in mind in this was was, is there some point when a piece of art crosses over to hate speech? Some feel attacked because a sacred image is desecrated, and the artists in the show feel that they’ve been attacked. We didn’t answer any questions or solve and problems, but I do think we all got something out of it.”

Penn State Abington officials that we spoke with say they intend to leave the sculpture exactly where it is.

“I am so proud of our students and their composure at the teach-in,” says Penn State Abington senior art lecturer Bill Cromar. “They resisted the pitfalls of logical fallacy, ad hominem attack, rhetorical stonewalling, reactionary emotionalism, and lack of empathy that can so easily undermine one’s position when trying to defend difficult, nuanced and contextually driven artwork.”

The show officially opens on Friday, and Halnon says she hasn’t decided what the next move is. We asked her if she’d be leading a protest at the opening.

“I’ve got papers to grade,” she replied.