This year’s Philadelphia Flower Show honors Holland, which went off the deep end for flower bulbs four centuries ago. 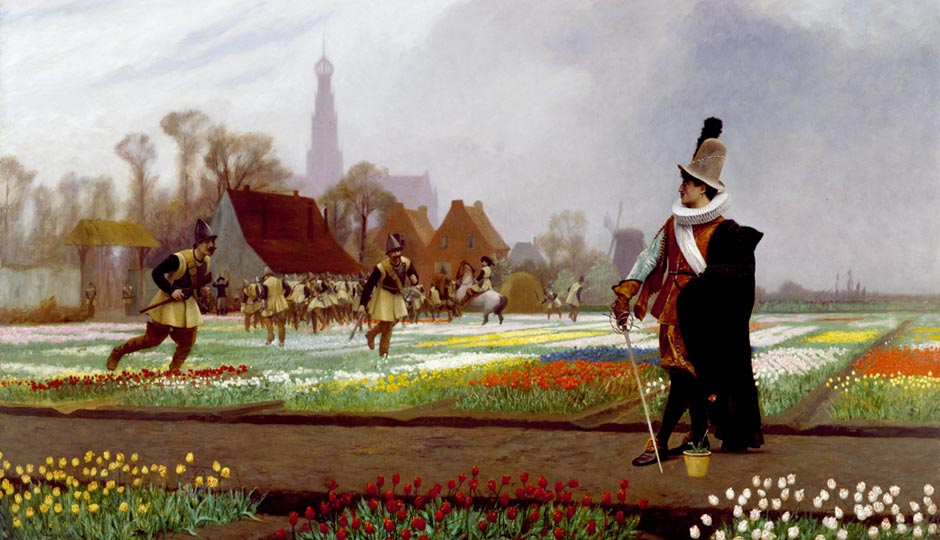 “The Tulip Folly” (1882), by Jean-Léon Gérôme, depicts a nobleman guarding a plot of blooms while soldiers trample other beds to cut down on the supply of bulbs. | Image: Walters Art Museum, public domain

The Philadelphia Flower Show opens tomorrow at the Convention Center, with a theme of “Holland: Flowering the World.” When you think Holland and flowers, you no doubt think tulips, because that’s where tulips come from, right? Well, now they do. But back in the 16th century, tulips were a newfangled introduction in Europe — one the Dutch took so to heart that they wound up snapping their economy like a broken stem. Here, a few things you might not know about the Great Tulip Mania.

1. Tulips originally evolved in Central Asia and were first cultivated in what was then known as Persia in the 10th century A.D. They’re not mentioned by the writers of antiquity. The name “tulip” dates to the 1550s in Europe and may derive from the Persian word for “turban,” due to the flower’s shape. (Or not; another theory is that a translator mistook the word for “turban” for the flower, since Persians often wore tulips in their turbans.) In the wild, tulips tend to be small and shy.

2. Selim II, sultan of the Ottoman Empire (1524-1574), was such a fan of tulips that he ordered the Kadi of Azaz in Syria to send him 50,000 bulbs, and imported another 300,000, probably Tulipa schrenkii, from the Crimean city of Kaffa for his flower beds in Istanbul.

3. In 1554, Ogier Ghiselin de Busbecq (ooh, hipsters! Cool names alert!), the ambassador to the Ottoman Empire for Holy Roman Emperor Ferdinand I, sent some Turkish tulip bulbs to his buddy, the Flemish botanist Carolus Clusius. Clusius helped create Leiden’s Hortus Botanicus, one of the earliest formal botanical gardens in Europe, and did a lot of study of the phenomenon in tulips known as “breaking.” This occurs when a tulip of one color — red, say — has offspring that are wildly and decoratively striped and splotched with other colors. No one at the time understood why this happened or why it only happened to tulips (and sometimes lilies).

4. Holland’s interest in tulips began to grow, and the wealthy started to exchange the bulbs as gifts that bore a frisson of anticipation: Who knew when (or why) a staid yellow or orange version might give birth to a bizarre motley child? The flowers became status symbols just as the Dutch East India Company, which happened to be headquartered in Amsterdam, began its state-sanctioned monopolized spice trade. The world’s first mega-corporation, the company issued shares of stocks and bonds to the general public to finance its voyages. Cue raining money.

5. Every tin-pot farmer and two-bit gardener in Holland began frantically growing tulips to sell to the rich, setting off a wildly escalating market. New varieties got highfalutin names like “Admiral of Admirals” and “General of Generals.” Speculators actually created a “futures market” for tulip bulbs that traded on contracts to purchase crops at the end of the growing season.

6. Among the list of items one aficionado traded for a single bulb of the variety known as “Viceroy” in 1636: eight fat swine, 12 fat sheep, a silver drinking cup, a bed, four tuns of butter and a thousand pounds of cheese. Each bulb was worth 3,000 to 4,200 guilders at a time when a skilled craftsman earned perhaps 300 guilders a year. One of two extant “Semper Augustus” bulbs that year was traded for 12 acres of land.

7. Tulip-trading wasn’t done on the official Exchange; the contracts for bulbs were dealt in meetings at taverns, with an official wine fee required for participation. Historians continue to debate whether the economic adventuring was widespread or simply involved a small coterie of florists, as the bulb traders were known. Contemporary records are scanty, and an immensely popular 1841 book, Extraordinary Popular Delusions and the Madness of Crowds, by a Scottish journalist named Charles Mackay, may have played up the scale of the phenomenon.

8. In Mackay’s telling, speculators finally were reduced to asking the Dutch government to step in and regulate prices when the bottom dropped out of the market early in 1637. (The collapse may have been precipitated by an outbreak of bubonic plague in Haarlem.) Buyers were left holding contracts for future deliveries of bulbs so expensive that they couldn’t possibly recoup their price.

9. Regardless of the scope of participation, some scholars have argued that the very nature of the bubble changed Dutch culture; as Anne Goldgar put it, “Even though the financial crisis affected very few, the shock of tulipmania was considerable. A whole network of values was thrown into doubt.” What was the world coming to when people would trade an entire farm for one flower bulb? How could one tell what anything was worth in such topsy-turvy times?

10. It wasn’t just the Dutch who were tulip-crazed. Forty years after the Dutch bubble burst, Ottoman Empire Sultan Ahmed III (1673-1736) proved that those who don’t remember the past are doomed to repeat it, by presiding over what’s known as the Tulip Era. This lasted from 1718 to 1730 and saw, ahem, a flowering of the arts in the empire. A simultaneous demand for tulips sent prices for bulbs spiraling so high that the government stepped in to stabilize them.

11. It wasn’t until the mid-20th century that British botanist Dorothy Cayley pinned down the cause of tulip “breaking”: a virus that infects bulb tissue and spreads from plant to plant. So all those guilders had gone for diseased bulbs.

12. The bitcoin bubble — or “bubbles,” rather; there have been at least four so far — has frequently been compared to the irrational flowering of tulip mania. So has the Beanie Baby bubble.