Norristown native Rob Lawless has embarked on a quest that’s not as crazy as it sounds. 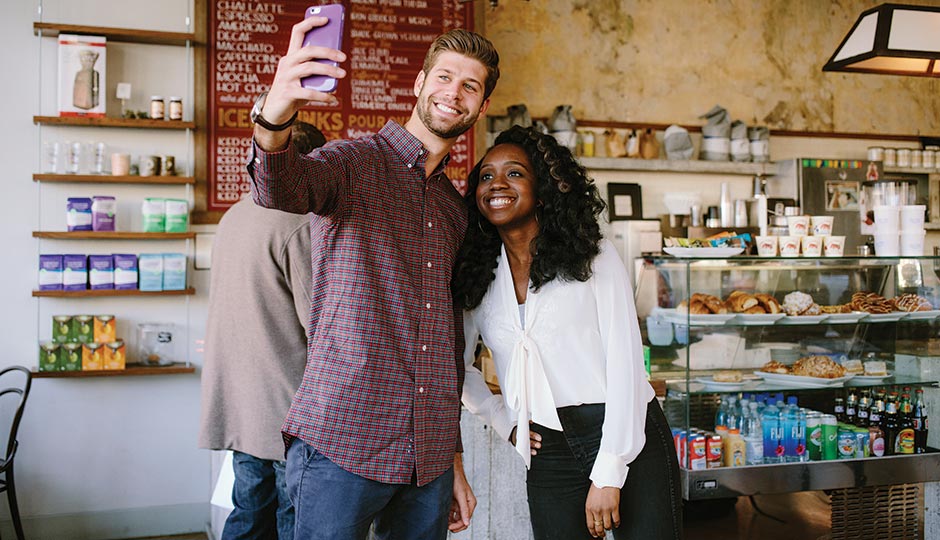 When I walk into Shot Tower Coffee just after 9 a.m. on a recent Friday, it doesn’t take me long to spot Rob. His hair is slicked to the right, just like in his photos. As I near the table where he’s sitting, he greets me with the ear-to-ear smile I’ve seen on Instagram so many times.

No, this isn’t an early weekend Tinder date, and Rob Lawless isn’t quite famous. A few nights back, we arranged this sit-down via email. When I reached out to ask if he’d be the subject of this story, he asked if I’d be the subject of a story, too. Lawless, 26, wanted me to take part in the very project I want to document: He was 14 months into a 10-year quest to make 10,000 new friends in a very 21st-century way. On this unseasonably warm January morning, I’m the 644th stranger to meet him.

Lawless’s Instagram — robs10kfriends — is a perpetually scrolling storybook. Each person he meets (mostly young Philly professionals, but he’s chilled with people like Michael Nutter, Tracy Davidson and activist Asa Khalif, too) gets a post that peeks into his or her life. The accompanying photo features Lawless with his arm slung across his new friend’s shoulder, both smiling for the cam.

When it’s my turn, I come with doubts. What kind of person devotes several hours to strangers every single day? And then broadcasts it on social media? As we launch into conversation, though, with the sun beaming onto our table, I quickly cross some items off a mental list: conventional narcissist, needy millennial, lonely bro, creep. As Lawless tells me his story in an almost shy tone — and probes me about mine — he doesn’t fit any of those profiles.

“My head is pretty much on a swivel,” he tells me. Walking down the street or sitting in a bar, Lawless will break his neck to see who’s around. “I’m a heads-up, hello person,” he explains. He wants to get to know people. His parents, for example, couldn’t walk with him around campus at his alma mater — Penn State — without somebody honking to get Rob’s attention. Lawless is attempting to re-create that sense of community here. He aspires to walk down any random street and know everyone.

Four years ago, you’d have found the Norristown native in a suit, behind a desk at Deloitte. He left that job seeking more risk and made his way to the sales team at a tech start-up, but even there, he questioned whether he was being daring enough. The 30-minute cold calls were too short to form the connections he yearned for, which spurred the project. So when Lawless was laid off last June, he made meeting people his full-time gig.

His plan, though daunting, seems to be working. He starts each week with about 100 meeting requests, and he’s seeing five or so people a day, one every two hours beginning at 9 a.m. For income, he’s living off recent holiday donations from an older sibling and his frat brothers; a sponsorship from a local tech start-up has helped. He’s tapping savings from his previous jobs, too. He hasn’t asked his parents for money, they confirm.

Lawless is only seven percent of the way to 10,000, which is no arbitrary figure. In his book Outliers, Malcolm Gladwell argues that 10,000 hours is the “magic number of greatness,” the time you need to put in to become truly good at something. Lawless isn’t clear about exactly what he’ll get good at, but if he ultimately reaches his goal at age 35 — he swears this isn’t an elaborate ploy to get hired — he’ll more deeply understand what the people around him value. He’s found that in their hour, most folks jump into the depths of their lives, building a trust that may be the foundation for a new kind of modern friendship. While the names slip from his memory first, Lawless can offer an interesting fact about each person he’s met. Right now, “The city feels a lot more like home,” he says. “I’m at the point where it’s weird to go a week without running into a friend from the project.”