Police are investigating. $13,000 in reward money has been offered for information leading to the vandals. 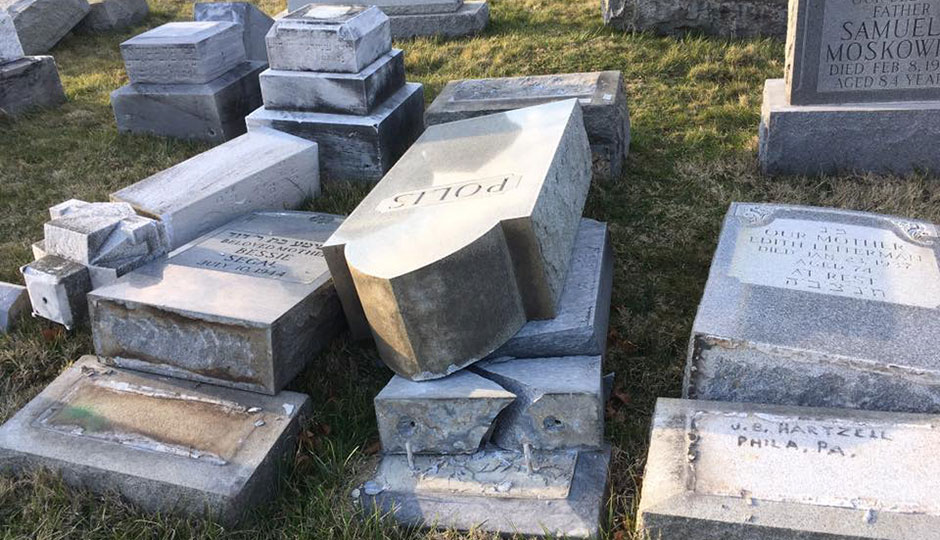 Hundreds of headstones at a Northeast Philadelphia Jewish cemetery were vandalized over the weekend. Police are investigating.

The vandalism was discovered on Sunday morning at the Mt. Carmel Cemetery at Frankford and Cheltenham avenues in the Wissinoming section of the city. A local rabbi told NBC 10 he counted 460 headstones that were toppled or otherwise damaged.

The Mizel Family Foundation, in conjunction with the Anti-Defamation League, is offering a $10,000 reward for information leading to the conviction of the vandals. FOP Lodge 5 head John McNesby says the union is offering a $3,000 reward as well. “Bring them in tonight and you are paid tomorrow,” he tweeted.

“Upon their arrival at the listed location, responding officers were met by the complainant, who reported that three headstones belonging to his relatives were damaged, due to being knocked over,” Philadelphia Police said in an email. “The cemetery was inspected and approximately 100 additional headstones were found to be knocked over; it appears that the incident occurred sometime after dark on Saturday, Feb. 25, 2017.”

Mayor Jim Kenney was among the leaders who denounced the vandalism. “My heart breaks for the families who found their loved ones’ headstones toppled this morning,” he said in a statement. “We are doing all we can to find the perpetrators who desecrated this final resting place, and they will be prosecuted to the fullest extent of the law. Hate is not permissible in Philadelphia. I encourage Philadelphians to stand with our Jewish brothers and sisters and to show them that we are the City of Brotherly Love and Sisterly Affection.”

There is a GoFundMe for cemetery repairs.

This was the second Jewish cemetery vandalized in the country in a week; one in a St. Louis suburb was vandalized the previous weekend. The Anne Frank Center for Mutual Respect came out against President Donald Trump after the vandalism.

Jewish graves in Philadelphia now vandalized. Stop this incubator of #Antisemitism and other hate. WE BEG YOU @POTUS @realDonaldTrump pic.twitter.com/RHuIjdE2Yg

“We applaud Mayor Jim Kenney’s condemnation of this attack and we demand a swift response from Senator Pat Toomey and other congressional leaders who are working with Trump,” Jewish Voice for Peace’s Philadelphia chapter said in a statement. “They must go beyond mere condemnation by acknowledging the role this president has played in fomenting intolerance and xenophobia across the country. Trump and his enablers in Congress have already done immense damage to our society, and they must take extraordinary steps, immediately, to halt the spiral of hatred they have unleashed, whether it targets Jews, Muslims, immigrants, transgender individuals, or any other group. If they do not, they should expect to hear from us.”