Scenes From Yesterday’s “Day of Action” Demonstration in Center City

During rush hour yesterday, activists took to the streets to demand a $15 minimum wage, an end to stop-and-frisk, and a stop to Temple's proposed on-campus stadium.

Several coalitions joined together on Thursday — Fight for 15’s national Day of Action — to not only demand a $15 minimum wage, but to also protest local issues like Philly’s stop-and-frisk policy and Temple’s proposed on-campus stadium.

The mash-up of about 200 people met at 2 p.m. at Temple University, and from there they marched down Broad Street and around City Hall where they made a pit-stop. Drummers preformed and the crowd swelled with excited on-lookers.

The march eventually came to a full-stop in front of the McDonald’s at the corner of Broad and Arch Streets. There Shymara Jones, a fast-food worker, mother, and longtime advocate for a $15 minimum, led the discussion.

When Jones began her fast food job at Popeyes, she made $7.25, now she said she makes $8.25 and that that raise only happened because of nationwide strikes. She argues the money isn’t enough to make ends meet for herself or for other fast food workers.

“There is someone to blame for the fact that so many of us working in fast food live in poverty, and it’s not us. It’s the multi-billion-dollar fast food and retail industries, where CEOs and corporate executives make millions while my co-workers and I — the ones who stand on our feet all day, work overnight, get grease burns, and deal with constantly changing schedules — struggle to buy our kids clothes and put food on the table,” wrote Jones last year in an article for Attn.

Shartita Rollins, a 43-year-old nurse at Westgate Hills Rehabilitation and Nursing Center, said she came out today simply because people need “more money to live off.”

Rollins makes less than $15 an hour; she said is working to send her son to college.

“I’m sacrificing for him to go to college because I want him to have a better life,” Rollins said. 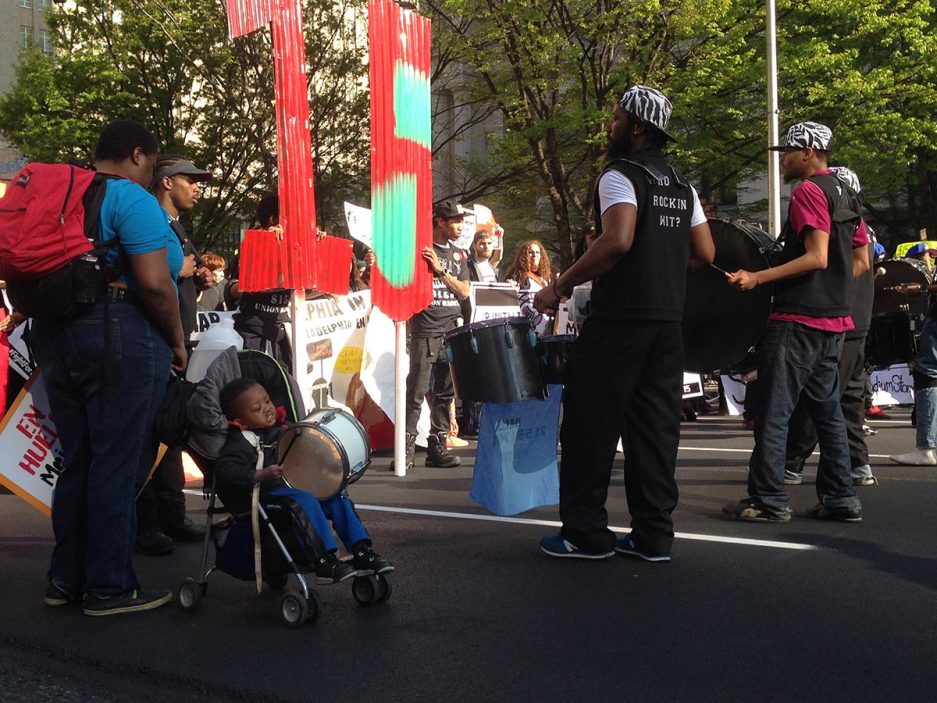 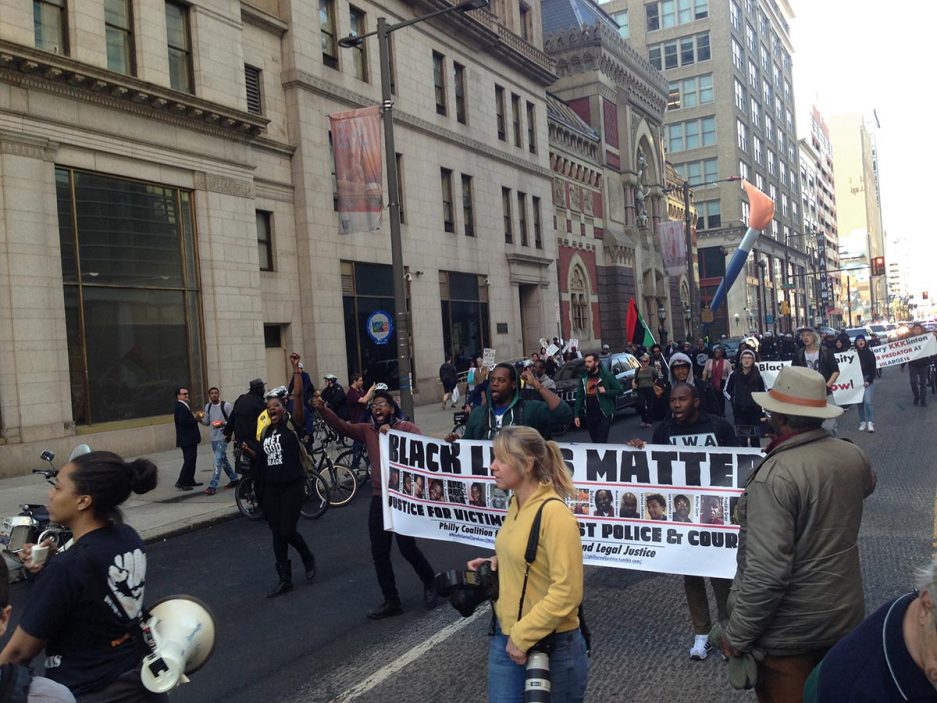 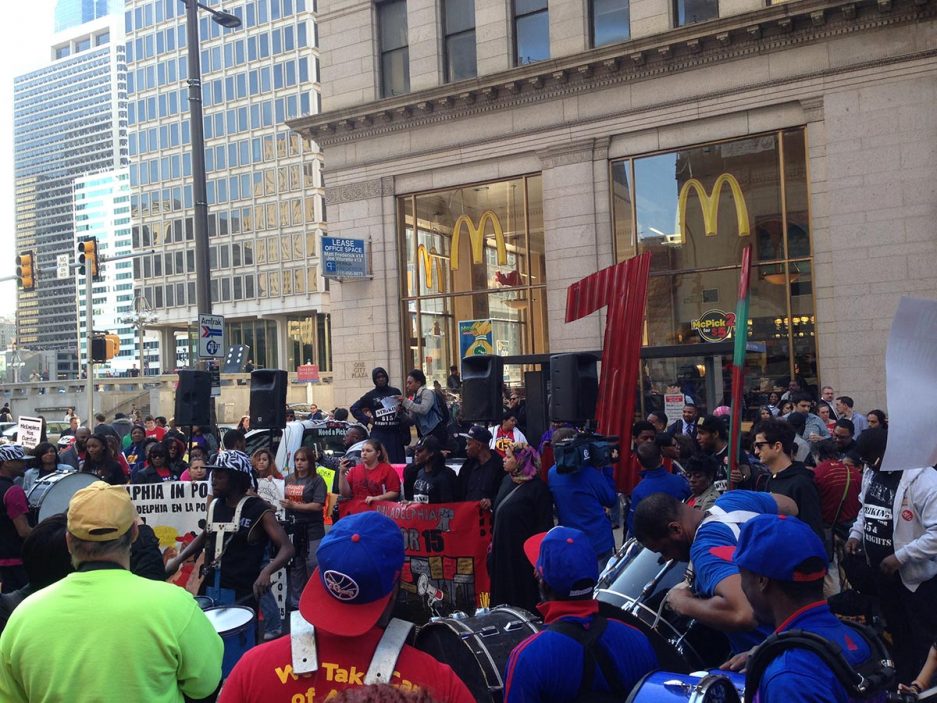 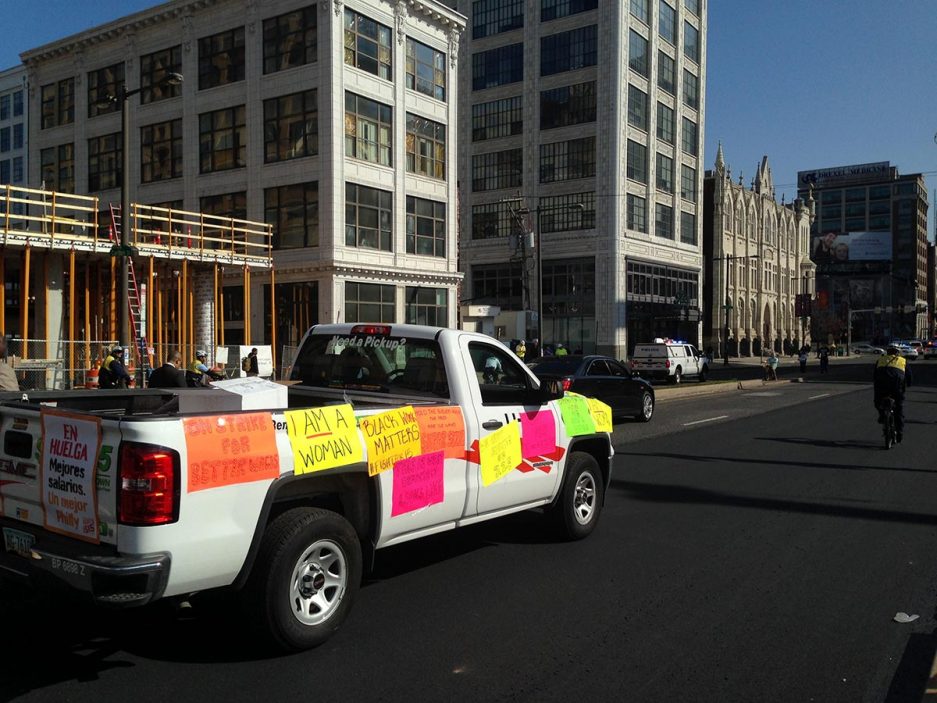 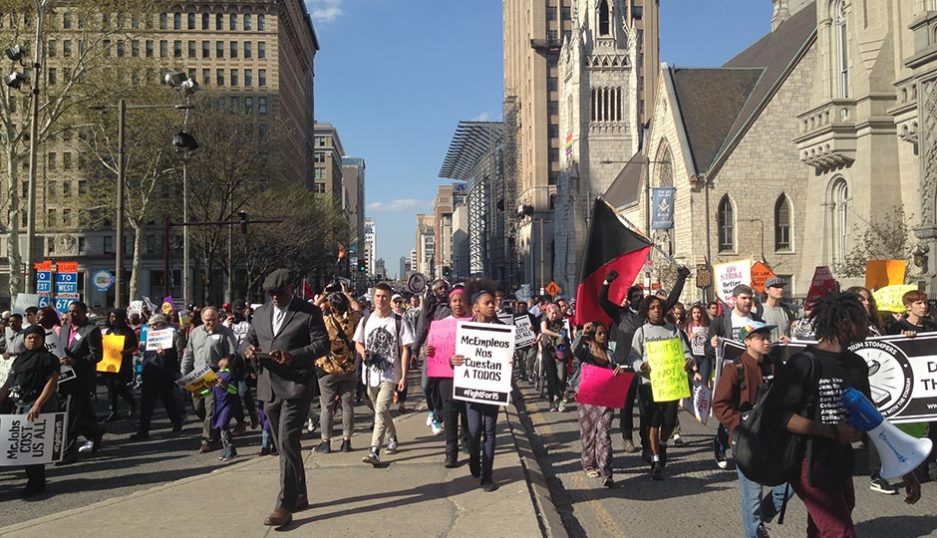 Several others spoke at the event, most notably U.S. Senate Candidate Katie McGinty, who has vouched that she will make a $15 minimum wage a top priority if elected.  Temple students and North Philadelphia residents also spoke in-opposition to the university’s stadium plans. Several of them accused Mayor Jim Kenney of going back on campaign promises to raise the minimum wage and to end stop-and-frisk.

Most seemed optimistic that change was coming. One speaker spoke of California and New York‘s adoption of a $15 minimum wage, and argued that Philly will be next to join them.

Xelba Gutierrez, 31, explained why the seemingly unaffiliated groups combined their efforts into one large-scale protest.

“We are making a big effort to organize together,” said Gutierrez. “We all want the same thing, for justice and for everyone to have a decent life.”

Gutierrez said she identified with the organizations and their causes. Present at the march were activists from Fight for 15, Nursing Home Workers for $15, Temple’s Stadium Stompers and #BlackLivesMatter, among other organizations.