The Pillsbury Bake-Off:
Ladies (and One Male Flight Attendant)… Start Your Ovens

Manicured-nail-biting pressure. Heated debates over lemon zest. Padma Lakshmi. The 46th Pillsbury Bake-Off had it all, including six local finalists vying for a $1 million grand prize and a chance to bring a third-straight title home to Philly. Inside America’s most deliciously over-the-top culinary contest. 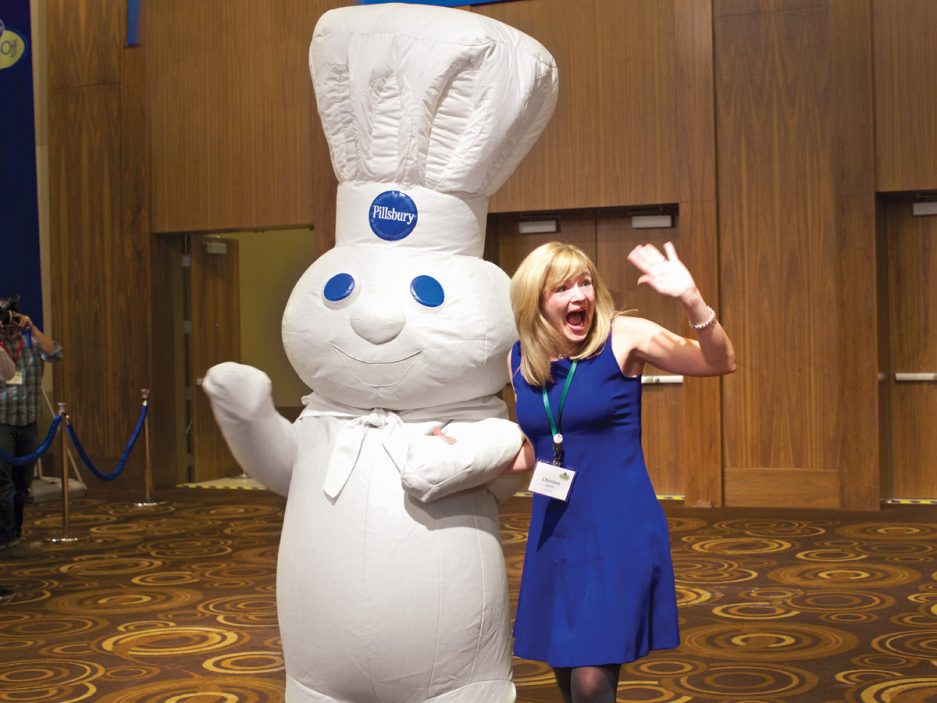 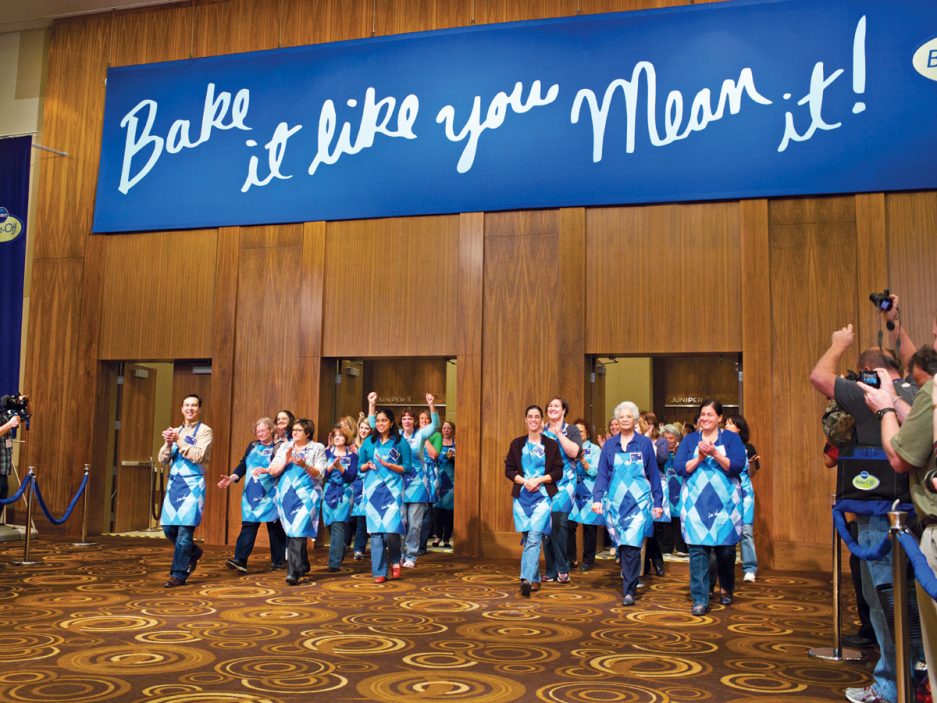 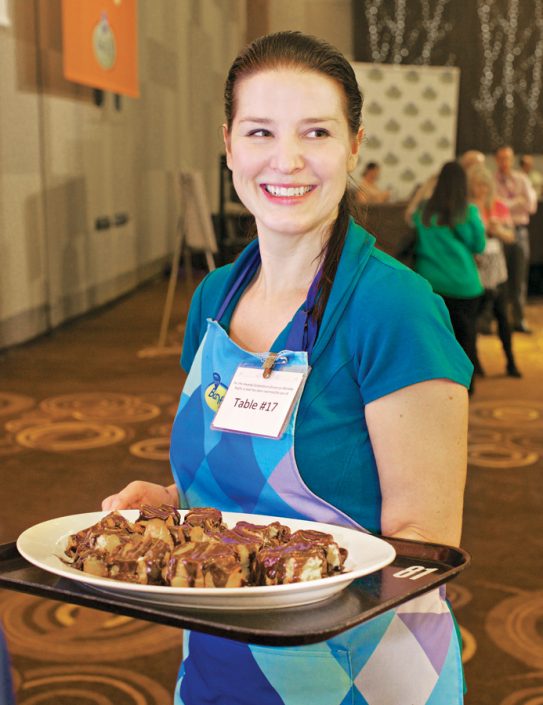 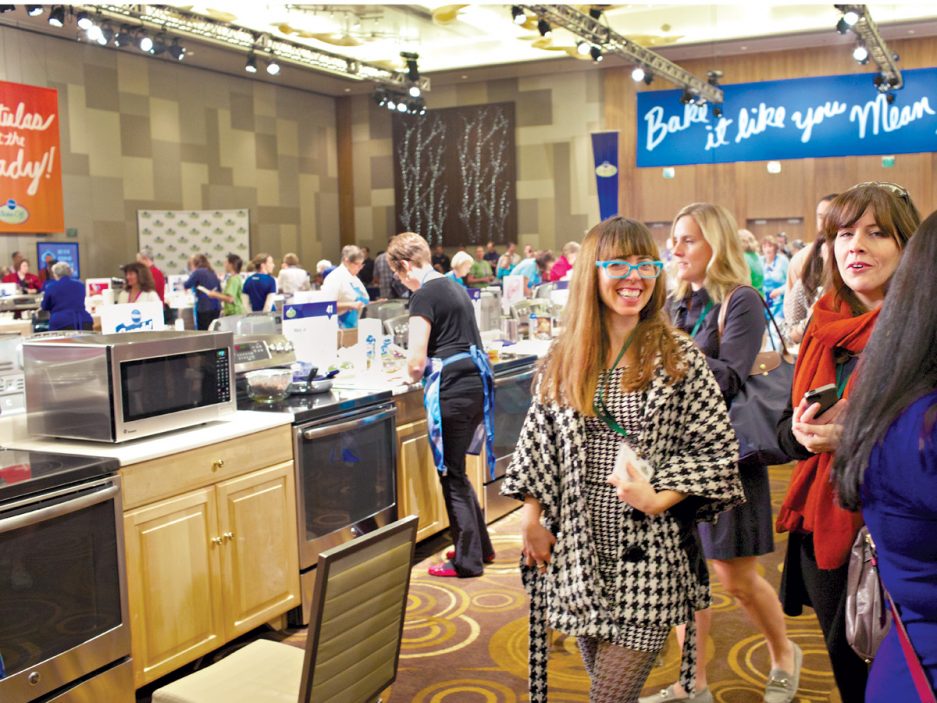 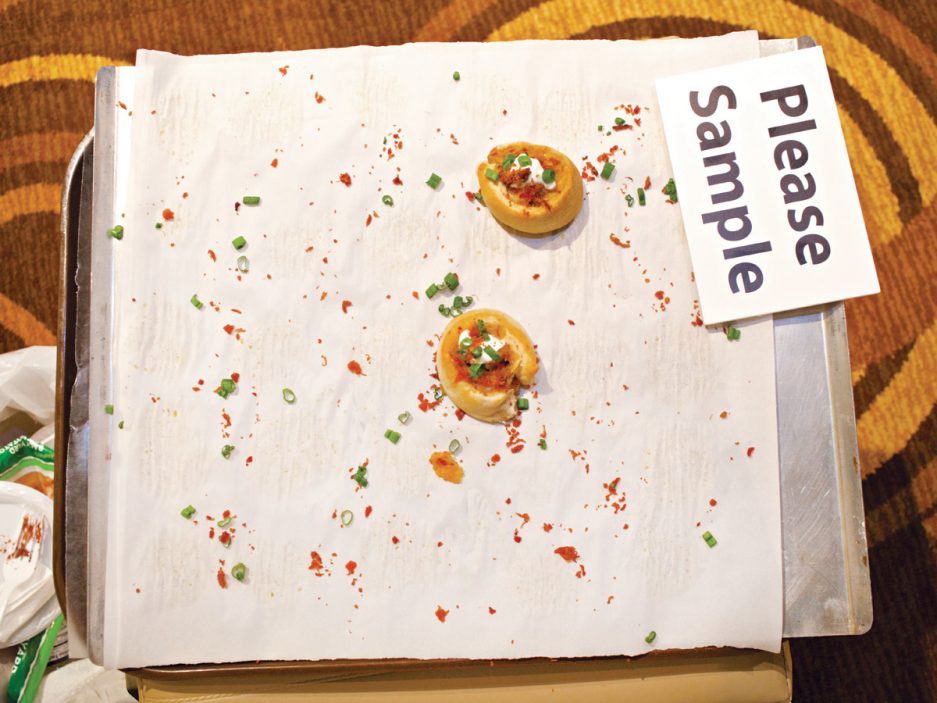 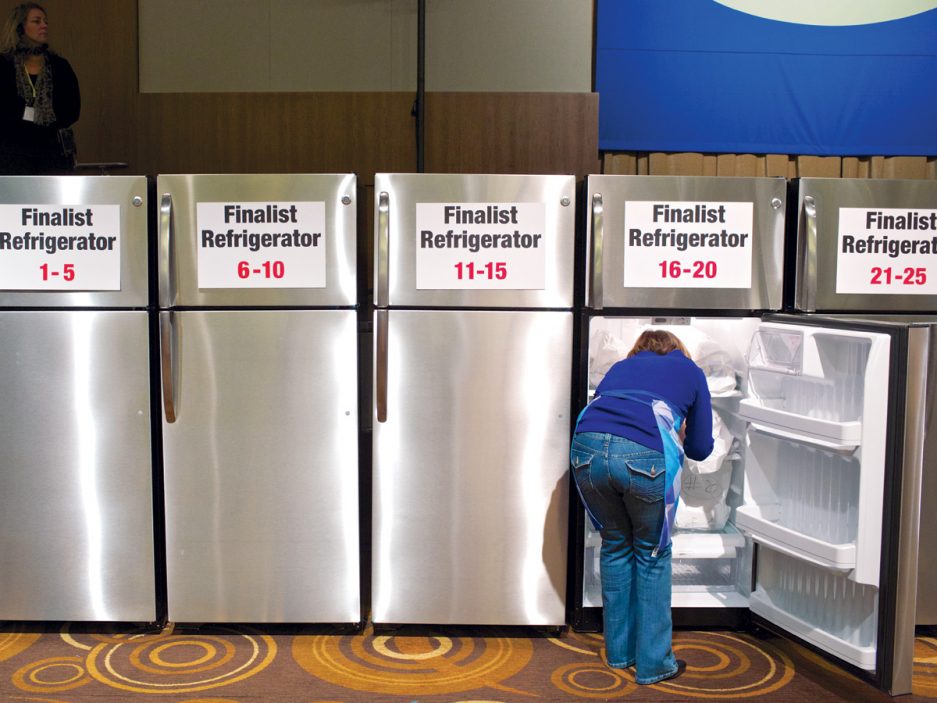 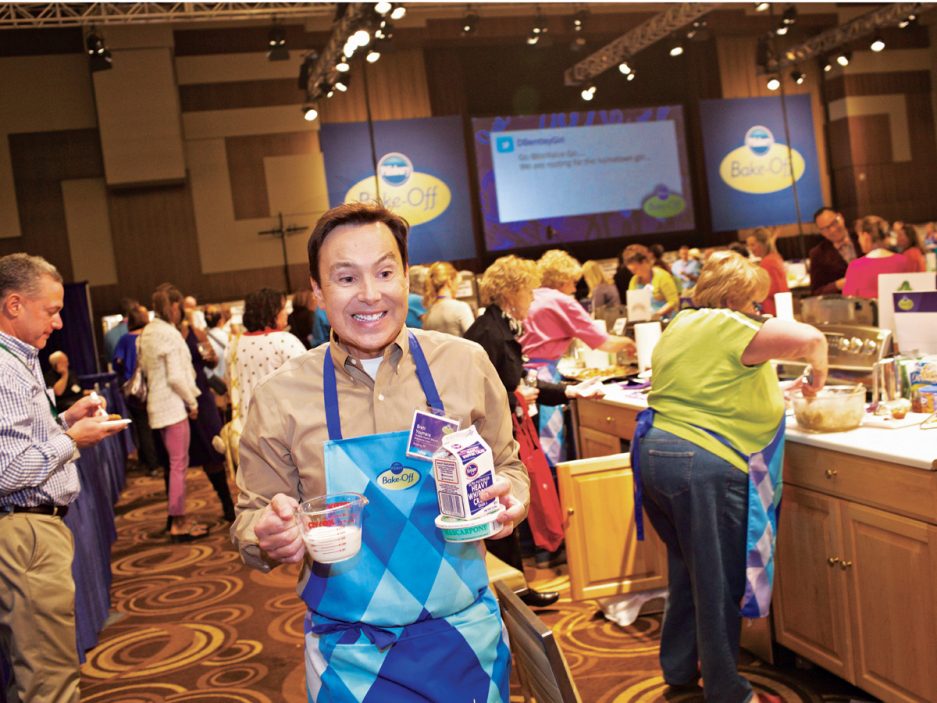 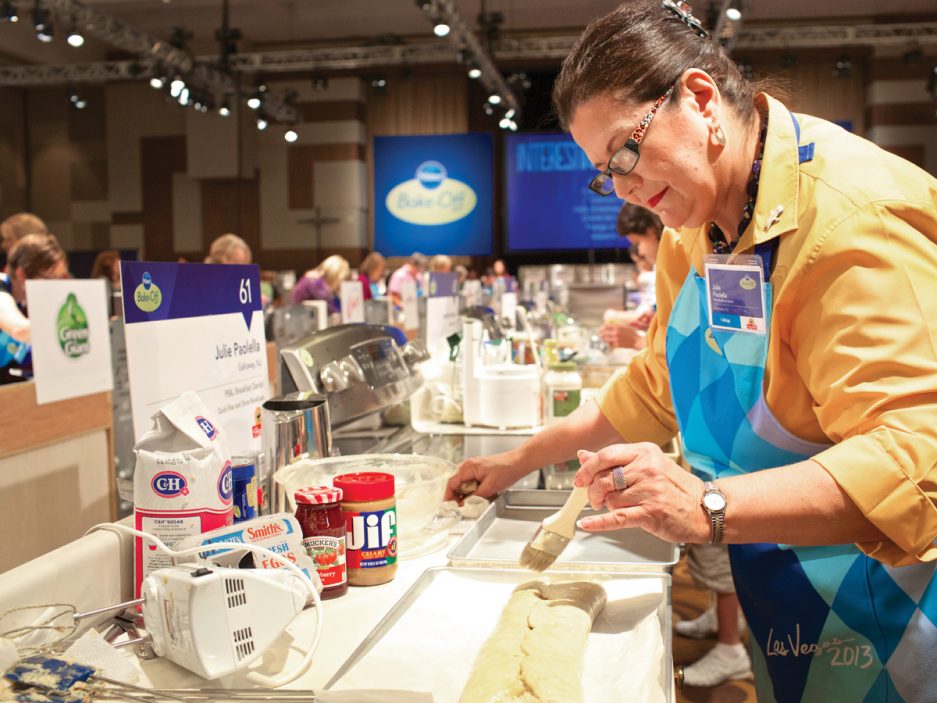 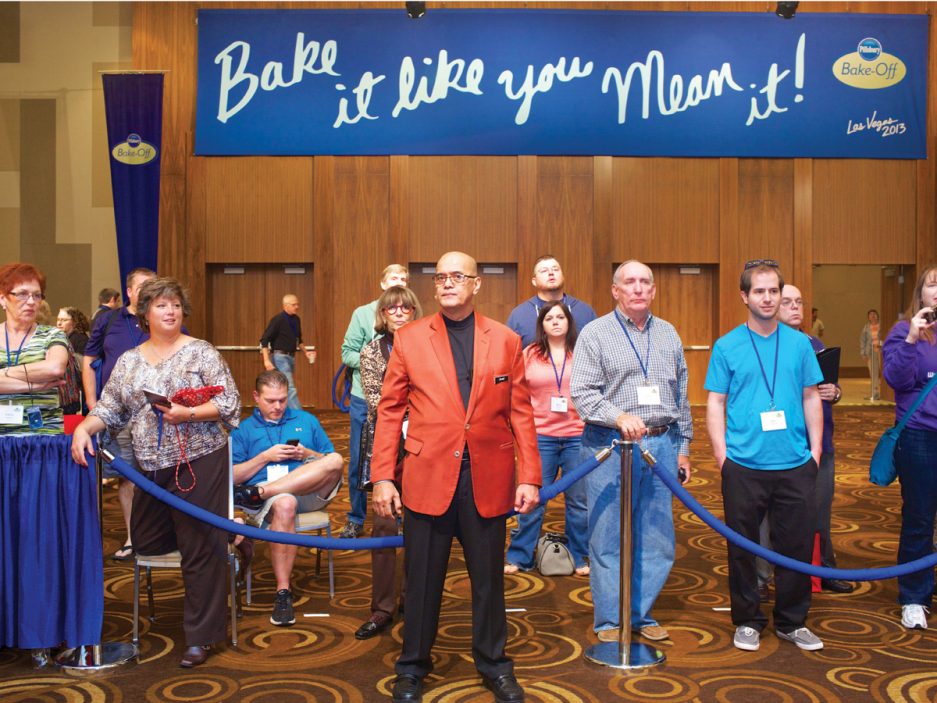 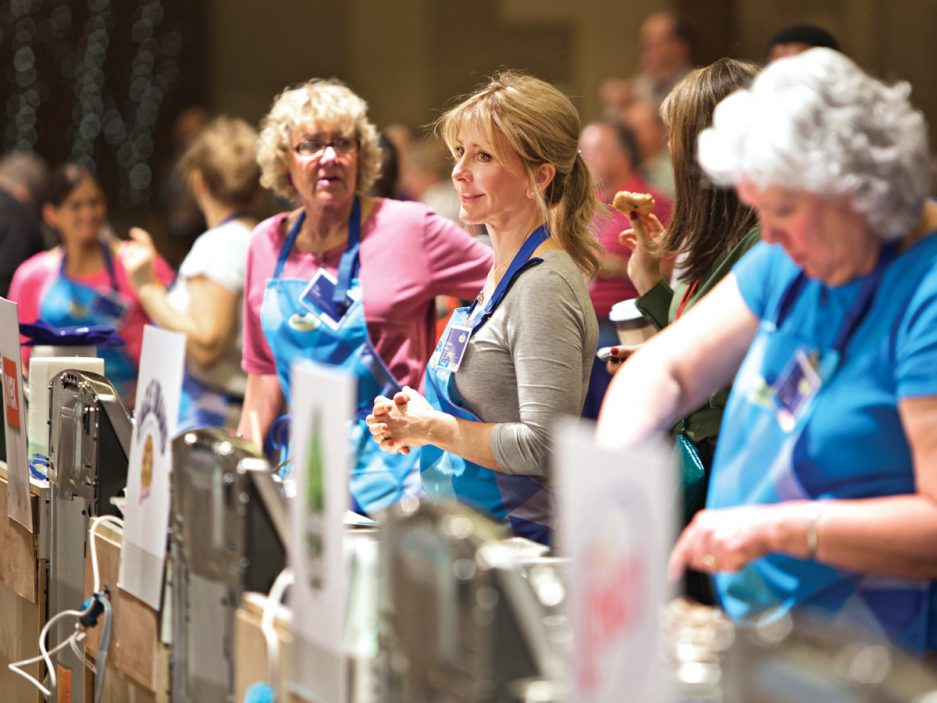 Christine Wilson of Sellersville (in green). 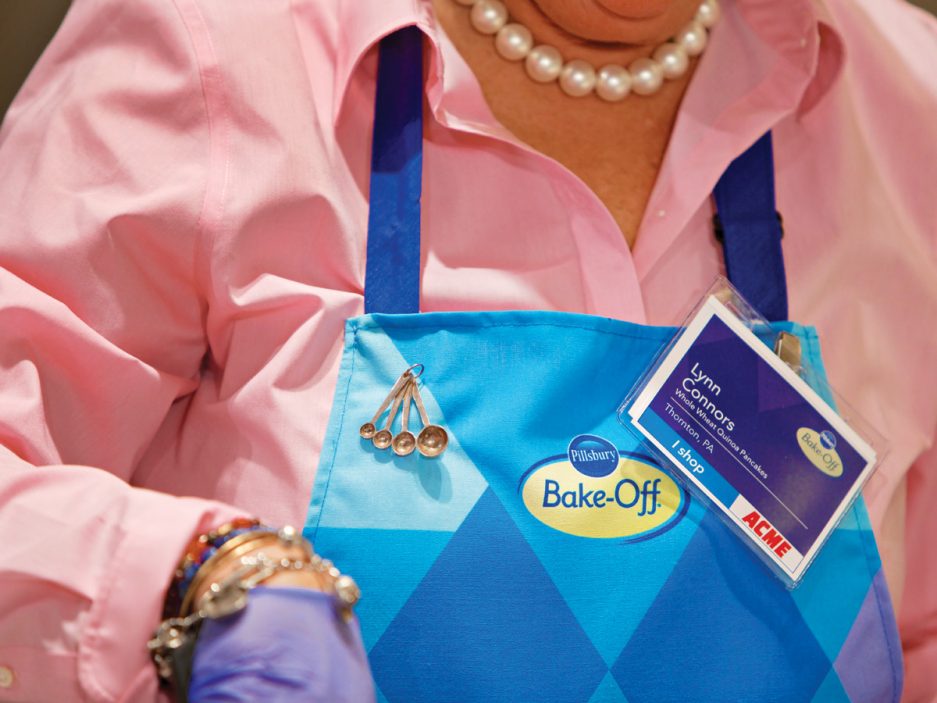 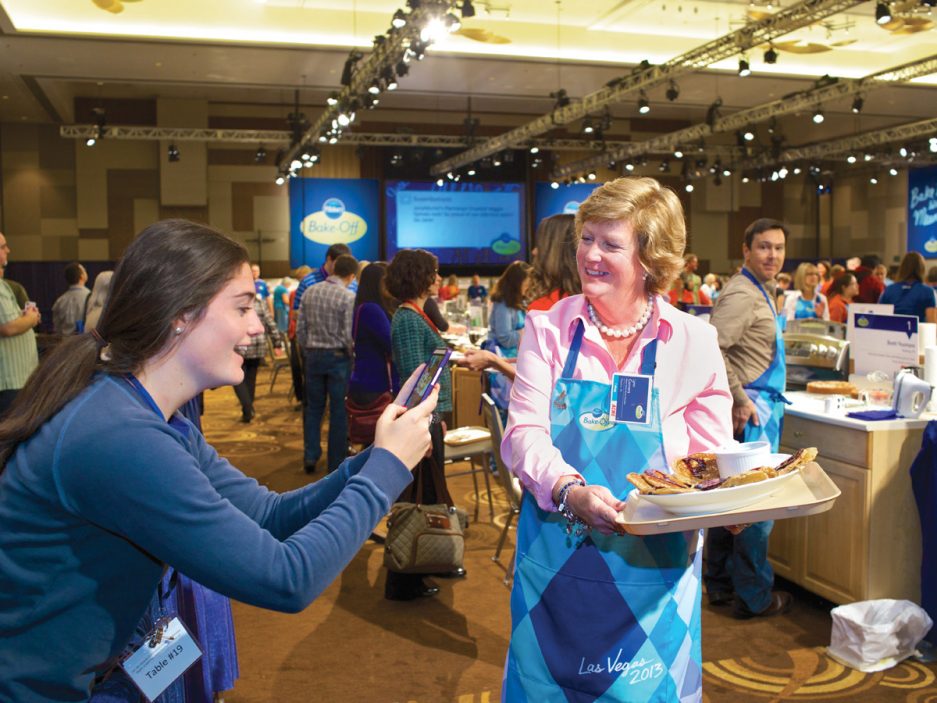 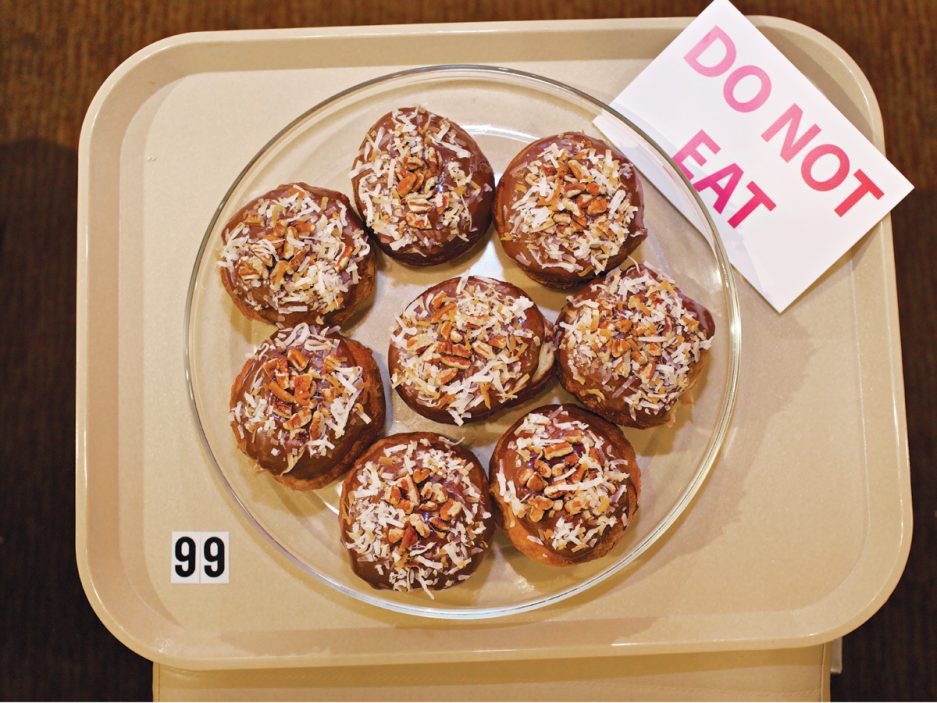 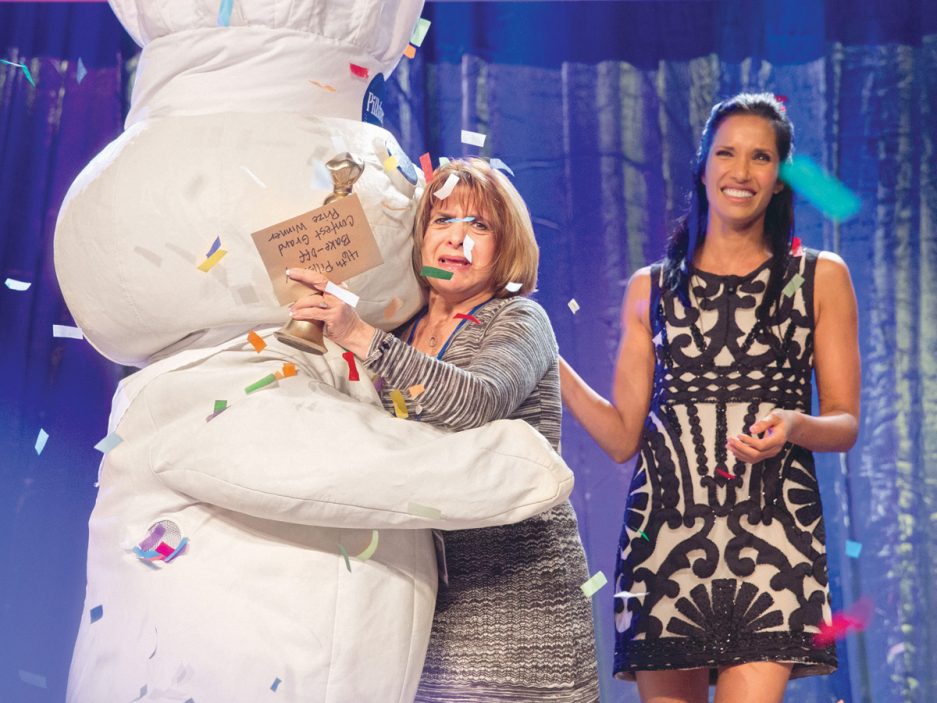 Padma Lakshmi and the Doughboy congratulate the new champion.

KRISTEN ABBOTT IS KEEPING HER EYE ON THE PRIZE—

in her case, a plastic cafeteria tray laden with Boston Cream French Toast, a table d’hôte consisting of French loaf (Pillsbury, of course), condensed milk, egg yolks, vanilla and Jif hazelnut spread. It is very, very difficult to maneuver this through a crowd. Because really—when was the last time you tried to carry a gooey dessert through a maze of people with some loon in front of you yelling “Recipe coming!” like Paul Revere?

Like her fellow contestants, Kristen hopes hers will be the dish, out of 100 whipped up in this airplane-hangar-like ballroom at the Aria Resort & Casino in Las Vegas, that will win the million-dollar grand prize at the 46th Pillsbury Bake-Off. Kristen is one of six Philly-area finalists competing this year. Lean and taut, with shiny chestnut hair, at 33 years old she looks like an aerobics instructor on early-morning basic cable. But her disposition, up until now sunny and weather-girly, has sprung a leak.

She fretted that her first batch of French toast would be overdone, but it came out of the oven underdone. It was on to Batch #2. But then she briefly turned the oven off by accident, “so then it became a guessing game.” Feeling insecure, she hastily whipped up a third batch to enter.

Nine minutes later, Kristen changes her mind. Batch #3 is now too done. (She’s the contest’s Goldilocks.) She has to hand in Batch #2, which has been sitting out on her countertop perhaps just a tad too long.

The Boston Cream French Toast certainly looks food-magazine-worthy, all melty chocolate oozing out of crusty, eggy bread. But as Kristen leaves her entry behind at the judges’ table, her shoulders sag, and her smile dissolves. She really wanted the third batch to be perfect—“to give it my all,” she says as we amble back to her station. But it was not to be. I leave her sadly wiping her stove. She needs some alone time. Because she knows what I know.

THE FIRST THING you should know about the Bake-Off is that it’s big. Not, like, Super Bowl big, but big in sheer breadth. There are three days of presentations, and lunches, and seminars, and the highly anticipated presentation of the aprons, and all sorts of other folderol orchestrated by an army of peppy, fluorescent-shirted worker-bees from General Mills, Pillsbury’s parent company, with the rote efficacy of flight attendants pointing out the emergency exits. It all leads to the actual Bake-Off, when a hundred finalists line up at their assigned ovens to whip up their recipes for the judges. As with Miss America and the soap box derby, a sliver of the population views the Bake-Off as a vanishing brand of American exceptionalism. The rest of the country thinks, WTF?

Though the contestants on this November day are overwhelmingly white, female and middle-aged, this Cirque du Soleil of comfort food also hosts a quirky mix of D-List local celebrity chefs, prim test-kitchen doyennes who look like high-school English teachers, cookbook ghostwriters, whippet-thin hipster food bloggers who all think the graying women’s-magazine food writers are old fuddy-duddies, and women’s-magazine food writers who all think the hipster food bloggers are poseurs with no taste or training in fine cuisine (or fashion, for that matter). All concerned are spookily cheery, as if they’ve just walked out of a Dianetics lecture.

“Hi! I’m Averie!” said a tanorexic blond blogger who greeted me at the media dinner Saturday night. I later found out her full name is Averie Sunshine. (Let me just repeat that: Her name is Averie Sunshine.) She was sitting next to Jessie Oleson Moore, a.k.a. “The Cake Spy,” whose blog is equal to the Bible in the eyes of some of the contestants. Jessie, who spent a year living on Market East before moving to New Mexico, is known both for her last book, The Secret Lives of Baked Goods, and for her trademark kooky outfits, which are accented by wildly colored eyeglass frames. Also omnipresent is a life-size Pillsbury Doughboy, who bounds through the hallways like a balloon in the Macy’s Thanksgiving Day Parade, eliciting girlish squeals and endless iPhone photos.

All of which makes the Bake-Off both a ludicrous piece of theater and utterly fantastic. The first, held in New York in 1949 and attended by Eleanor Roosevelt, was won by Theodora Smafield of Rockford, Illinois, and her No-Knead Water-Rising Twists. In the ensuing decades, desserts have tended to be king: Leading into this year’s contest, seven of the last 10 winning dishes were sweets.

Philly was, shall we say, a bit slow to the ovens. The first champ from these parts didn’t arrive until 2010, when Delanco’s Sue Compton dazzled with her Mini Ice Cream Cookie Cups. Defying the odds, in 2012 we triumphed again, as the Main Line’s Tina Verrelli and her Pumpkin Ravioli with Salted Caramel Whipped Cream took home the million bucks. The six locals here are looking to complete the trifecta. To them, the Bake-Off is more than a kitschy competition—it’s art. “I’m passionate about food and cooking. I am always trying to create something,” says Christine Wilson, 58, a fragrance and cosmetics saleswoman from Sellersville whose daughter is also competing. “To me, a sugar cookie roll is a blank canvas.”

On the shuttle in from the Vegas airport I meet Nadine Clark, a 40-year-old product manager from Telford, Bucks County, here for her third try. While she struck out with her prior Fig and Blue Cheese Appetizer Tarts and Thai Chicken Subs, she’s feeling confident about this year’s Chicken Caprese Focaccia.

She’s brought along her mom, Kathy, a weathered redhead who looks like every other Philly Kathy you’ve ever known. Kathy is lamenting that I wasn’t here for the last Bake-Off, when Martha Stewart announced the winner. “She was fabulous,” Kathy says.

This morning at the Philly airport, Kathy handed out copies of Nadine’s recipe to everyone in the boarding area. “It’s really fun to have that kind of support, visible, right there with you,” Nadine says. “But yeah, she was out of control.”