The Emergency Room Is the New Place to Register to Vote

North Philadelphia's Einstein Medical Center is one of the first hospitals in the nation to allow visitors to register to vote with kiosks on site. 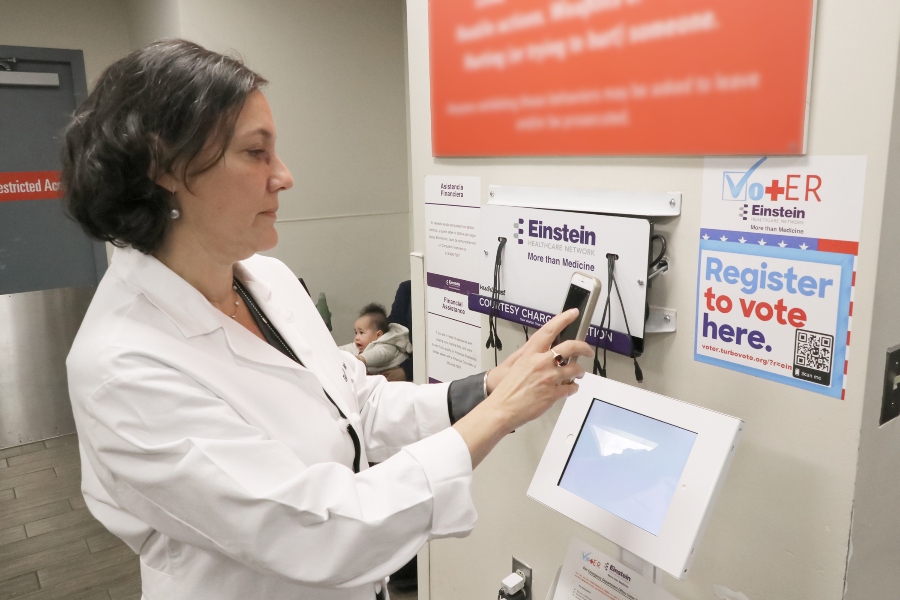 Einstein Medical Center is one of the first hospitals in the region, and one of few in the nation, to install electronic kiosks that allow people to register to vote. / Courtesy

The emergency medicine team at Einstein Health wants to change that.

This month, Einstein Medical Center became one of the first hospitals in the region and one of few in the nation, to install electronic kiosks that allow anybody — patients, visitors or staff — to check their voter registration status and register to vote.

The initiative is called VotER. Unlike other existing voter registration programs offered in hospitals and other healthcare spaces, VotER is digital, voluntary, and does not require the involvement of hospital staff, limiting any interference with patient care.

Why the Emergency Room?

It’s a well-known fact that not everyone in Pennsylvania has an equal opportunity at living a long, healthy life. A recent report from the state Department of Health found that Pennsylvania is rife with health disparities due to food insecurity, barriers to health care access, pre-existing health conditions, sexuality and race. The department’s findings showed people from traditionally underserved populations in the state, many of whom are minorities, accounted for a majority of individuals who experience fetal and maternal mortality, chronic disease, and sexually transmitted infections.

Einstein’s emergency department sees more than 95,000 patients each year. Many of those patients come from underserved populations that are directly impacted by public policies or the lack of public policies that address areas like homelessness, addiction, mental and behavioral health, food insecurity and access to healthy foods — all things that can lead to emergency room visits and are often topics of discussion during elections.

“There are about 50 million people in the United States that are not registered to vote. A large portion of that population are young people, people of color, or people of low socioeconomic status,” chair of the department of emergency medicine at Einstein, Elizabeth Datner explained. “Many of our patients come from one of those underserved populations. So, we are committed to being a resource to our community for all their medical or non-medical needs, and we’re trying to address some of the issues that we can help patients solve right in our emergency department.”

Bill Ryan, Einstein’s assistant vice president of government relations said the VotER program plays an important role in addressing the social determinants of health by meeting potential voters where they are and supporting them in becoming more civically engaged. 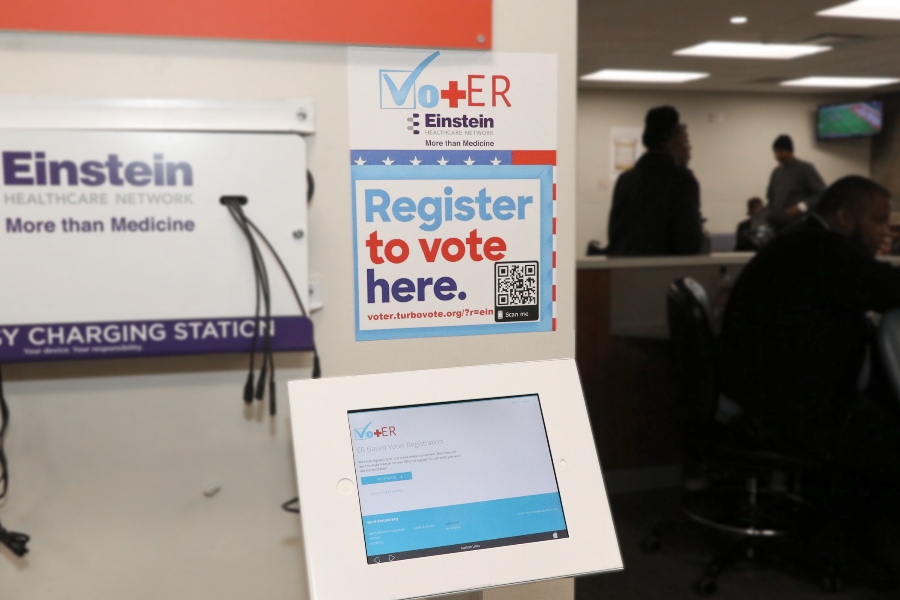 In Einstein’s ER, the VotER kiosk is located close to the entrance, surrounded by flyers that display the program’s website and a QR code that allows people to scan a barcode with their cellphone to access the registration website. / Courtesy

The VotER program originated in Boston at Massachusetts General Hospital in 2019. The program was created in coordination with a team from Harvard Kennedy School, a tech nonprofit called Turbovote, and behavioral sciences firm Ideas42.

In Einstein’s ER, the VotER kiosk is located close to the entrance, surrounded by flyers that display the program’s website and a QR code that allows people to scan a barcode with their cellphone to access the registration website. The nonpartisan process takes roughly 90 seconds to complete.

The idea is beginning to catch on. Representatives for Penn Medicine say the healthcare system has two VotER kiosks that they plan to install soon at the Penn Presbyterian Medical Center in West Philadelphia.

The site director at Penn Presbyterian, Judd Flesch, oversees a separate inpatient voting initiative dubbed Presby Votes that provides patients with emergency absentee ballots when they are unexpectedly hospitalized around the time of an election — a service that is offered by hospitals in at least 13 other states across the country.

Flesch believes voter registration programs in hospitals are the result of physicians taking a more comprehensive approach to medicine — going beyond just treating disease to caring for the whole person, a method that he says patients seem to appreciate.

“When you’re hospitalized, often to no fault of your own, you shouldn’t have to miss out on such an important life experience,” said Flesch. “I don’t think I’ve ever seen such universal appreciation for anything I’ve done in the hospital as I did when I handed out these absentee ballots to patients. That solidified the importance of giving people a normal human experience despite their illness.”

According to Datner, Einstein has multiple social programs in development that are designed to address issues that often fall outside of the traditional scope of medicine like services for opioid use disorder prevention, safe housing, violence counseling, and the financial consequences of trauma. The ultimate goal, Datner says, is to make it easier for people to lead healthier lives.

“We’re trying to bring resources to patients, both medical and non-medical so that we can help our communities be healthier.”