The chef and educator breaks down the rich history of Philadelphia’s soul food scene and recommends some of her favorite spots in the city. 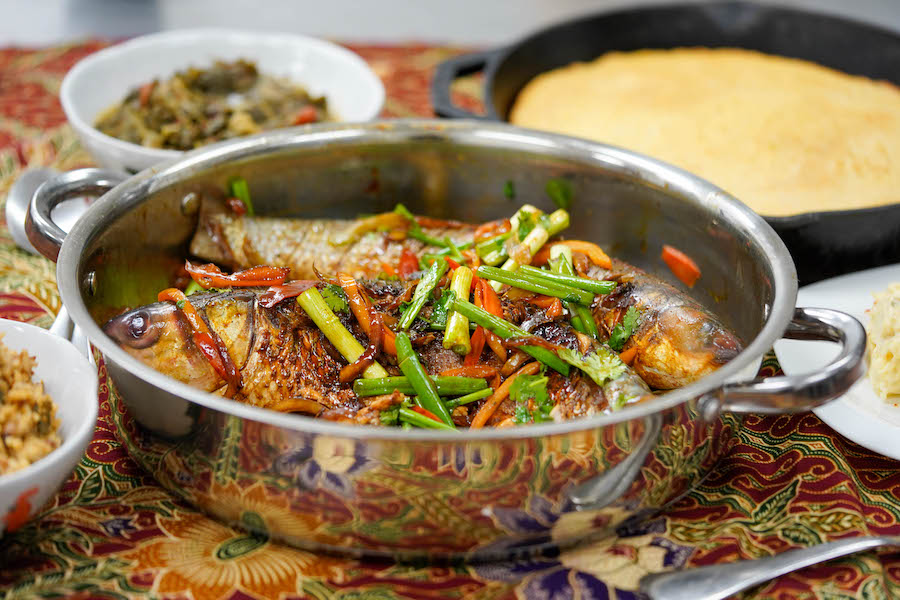 Through her weekly Soulful Sunday meals at Kampar Kitchen, Joy Parham has been giving Philly eaters a new view of soul food. Her meals — inspired by the seasons, what Parham is cooking at home, and her heritage as a Black Philadelphian — push diners to view soul food as what it is: food from the soul.

“Soul food was once, simply, Southern food,” Parham explains. “It started being called soul food because Black people were consuming it and white southerners wanted a way to separate the two cultures. Even though it was just food, Black people were the ones preparing it, [and white people] needed a way to make one more superior than the other.”

She stresses that there is a difference between soul food and Southern food now, since the culture has evolved and ingredients have changed. But, she says, her food is definitely southern-inspired, because it leans heavily on seasonality and fresh ingredients.

“Soul food is the music we’re listening to when we’re cooking, it’s the feeling, it’s the family that’s around. It’s those recipes that you actually don’t even have a recipe for,” she says. “It’s a really interpretive thing … I think of it as food that’s tied or rooted in ancestral foods that we eat. I think a lot of people associate soul food with those celebratory foods that they’re accustomed to being in Black people’s homes: fried chicken, cornbread, candied yams, mac and cheese … but it’s more than that.”

Parham says for a long time she refused to cook anything fried because it was important for her not to be a token. Now, in her pop-ups for Kampar Kitchen, she’ll cook it occasionally, but she’s noticed that white people tend to order that more, while her Black supporters are more likely to order her less widely known soul food dishes, like a stewed tomato and okra stew.

“I want to be true to how I actually cook for myself,” Parham said. “I can’t give you a soul food menu that is all fried foods and no vegetables, because that’s not true to me, so it wouldn’t be soul food. I don’t wanna typecast myself and I don’t want to do it to our people.”

Find Parham’s cooking every Sunday at Kampar Kitchen, and check out some of her favorite spots in the city for soul foods of all kinds, starting with …

Careda’s Caribbean Cuisine, Reading Terminal Market
“She does a mix of things but I love her West Indian food, and she makes a mean oxtail gravy. To me, that’s soul food because a lot of people from Philadelphia have ties in their heritage to West Indian or Caribbean background. I also like her juices, her sorrel is very nice. Her hot sauce is really good, too.”

Relish, multiple locations
“My favorite cornbread in the city is at Relish. I’ll go there and just get the cornbread. Cornbread can be done so many different ways, like super savory, super sweet, hot water cornbread. But they do a really sweet cornbread with a honey butter on top, with an egg, and it gets super crispy and they bring it out in a cast iron skillet. I go there for fried chicken as well. It’s super consistent, and they use smaller birds, which is important to me because the bigger birds taste weird.”

Honeysuckle, Mantua
“As a child I did not like bean pies, but Omar Tate and his wife [Cybille St. Aude-Tate] have changed my mind. They’re not open yet, but they’re working on opening a center where you’ll be able to get meal kits and grocery shop and stuff, and they do pop-ups sometimes with bean pies, which are definitely specific to the Nation of Islam, which is big in the Black community in Philly.”

Ummi Dee’s Burger Bistro, Strawberry Mansion
“This isn’t necessarily soul food, strictly, but she does a really good buttermilk fried chicken sandwich. It’s like their version of the Popeye’s sandwich. They do sandwiches and milkshakes and fries and things, but the fried chicken sandwich is always fresh, and they do fresh cut fries as well.”

Franny Lou’s Porch, Kensington
“I don’t go to Franny Lou’s for one specific thing. I’m going for vibes only. It gives old-school Philly vibes. It’s just a community vibe, and it forces you to engage. You can’t go there and just order and leave, you’ll always end up having a conversation with someone.”

Denise’s Delicacies, Strawberry Mansion
“My favorite spot to get a baked good is Denise’s. I go there and I get a slice of lemon pound cake. When I go to Ummi Dee’s, while I’m waiting for my sandwich I’ll go across the street and get the cake from Denise’s. And if it’s the summertime, I’ll get a water ice.”

Corrine’s Place, Camden
“They just have good food. I go there to sit down and have a meal. I like the turkey wings. The turkey wings are something serious, but I’ve enjoyed everything I’ve had from there.”