With its celebrated food trucks and storied neighborhood restaurants, there’s something for everyone to eat by Temple. 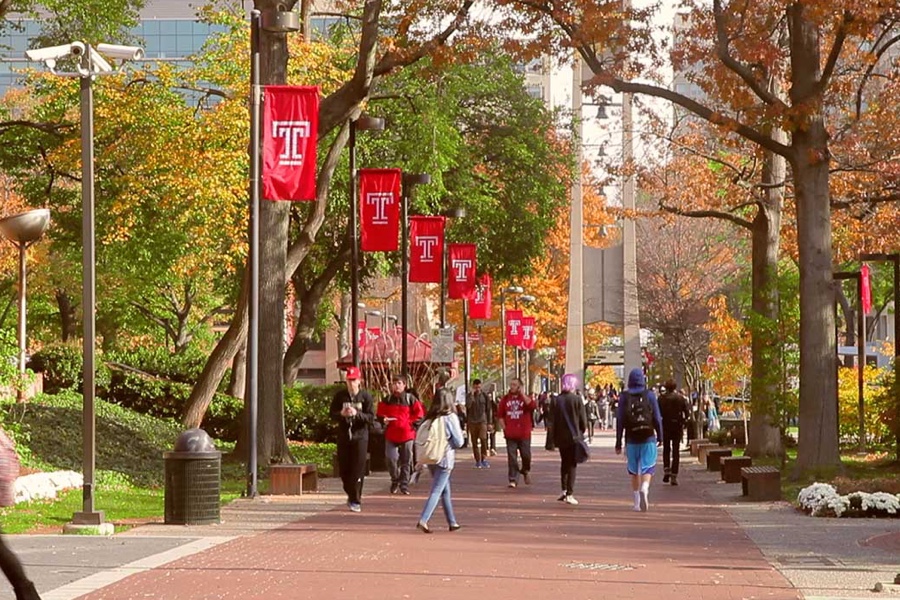 Temple’s campus is ever-changing: buildings rise, fall and shape-shift every few years (and sometimes months). But the dining options — long-standing trucks, shacks and unassuming-looking spots with deep ties to the community — have endured. Who knew some of the best kabob, coco bread, and fried chicken sandwiches in the city were on the way to chem lab? Read the guide, plan your next meal, and you’ll understand.

Champ’s Diner
Since Champ’s opening in 2015, many debilitating hangovers have been cured (or at least soothed) by a runny egg, crispy bacon and generous pile of home fries. While the spot had a welcoming dining area in the pre-pandemic days, they still manage to serve a large menu of breakfast classics from their takeout window on Cecil. Plus, iced coffee that rivals that of the Temple-famous 12th Street breakfast shack Richie’s. And, as a nice treat for the willingly early-riser or those condemned to class at the crack of dawn, Champ’s Diner opens at 7 a.m. 1539 Cecil B. Moore Avenue.

New Barber’s Hall
This is somewhat of an old-head spot, but maybe that’s your thing. The location is as much a historical site as it is a sports bar and banquet hall, having held performances by many of Philly’s music legends over its decades-long history, from Patti LaBelle to Boyz II Men. Since 1952, the building has been Black-owned and resistant to developers’ interests, offering a lasting little glimmer of the city’s golden age of jazz. Weekly specials aren’t bad either, like karaoke Mondays, wing night Tuesdays, happy hour Fridays, and an open-mic night held every Sunday at 9 p.m. The wings are consistently great, especially after a round of pool. 1402 West Oxford Street.

Ali’s Middle Eastern
Ali Ibrahim was a musician (then a handball player and then caterer) before setting up shop in a food truck, and later, a brick-and-mortar along the iconic 12th Street vendor pad. And after nearly 40 years of serving his falafel sandwiches and kabab platters, the stall has become a truly beloved lunch site for food that reflects Ibrahim’s Palestinian background and the time he spent in Syria and Kuwait. 1835 North 12th Street.

Yummy Pho
In the winter months, when you have no choice but to trudge through campus for one reason or another, there’s a light at the end of the tunnel. Enter a big bowl of piping hot beef phở with perfectly thin slices of flank steak at Yummy Pho. Since opening in 2017 in an ideal spot on Broad, this family-owned restaurant has reliably offered Vietnamese classics, including vermicelli bowls and bánh mì. With a menu of over 50 items, there’s something for everyone — vegans and vegetarians included. 2012 North Broad Street.

Crunchik’n
Elaborate corndogs have finally touched down in North Philly with this latest Crunchik’n location. Get your crunchdog covered in ketchup and mustard, or sugar, or French fries, or practically all these things. They’re sweet and savory, soft and crunchy, perfectly fine as an order of one (but splitting a crunchdog between two people wouldn’t be a bad idea either). All around, this is the perfect snack for lounging on Beury Beach. If you’re looking to supplement your highly accessorized Korean corndogs, Crunchik’n also serves Korean fried chicken, japchae, and kimchi cheese fries. 1428 Cecil B. Moore Avenue.

Pita Chip
When you’re in a pinch for time and the lines at Morgan Hall are heinously long, look across the street to Pita Chip, where the service is quick, portions are generous, and the fries are delightfully crispy. This modern Middle Eastern is always ready with a bowl of warm falafel when you need it, and for less than $13. Established by Omar Alsaadi and Mouhanad Kabbani, two high school friends from Damascus who immigrated separately and reunited in Philly, this very same falafel got a recent Best of Philly. 1600 North Broad Street, Unit 7.

Pub Webb
Located half a block from the Liacouras Center, this Cecil B. Moore staple provides a great place to watch the game, get a cold drink that doesn’t cost a fortune and enjoy solid pub fare. Since the shuttering of Draught Horse last year, the actual adults of the area have been left somewhat high-and-dry in terms of a robust bar scene. But with their live music schedule, a new outdoor area and some top-tier fried pickles, Pub Webb has set themselves apart. 1527 Cecil B. Moore Avenue.

Caribbean Feast
A host of trucks extend the reach of this Caribbean and soul food restaurant throughout the city, offering styrofoam containers packed to the brim with oxtail, goat roti, jerk chicken, beef patties, fried plantains, candied yams and coco bread from many street corners and sidewalks. But if you’re near Temple, you can go straight to the source. This location is just a few minutes north of main campus, tucked away among Temple’s medical buildings. 1338 Rising Sun Avenue.

Raising Cane’s
You’ve likely heard the news: The top contender in the chicken-finger game has a huge new location at Temple. Crowds descended upon the disco ball-strewn restaurant when it first opened in May, and it’s easy to see why. Though the menu is a bit stringent (fingers, fries, Texas toast, coleslaw and a signature sauce; no more, no less), the straightforwardness keeps the line moving all day. Oh yes, all day. This location is open until midnight (and until 1 a.m. on Friday and Saturday), which is exactly when the chicken-finger craving strikes most severely. 1717 North 12th Street, Unit D.

Sushi Ya
Enter sushi utopia at this casual spot on Girard, where they do not mess around with quantity or quality. Don’t come looking for bells and whistles at Sushi Ya — there are a few tables inside, but no booze, and much of the business comes from takeout. None of that really matters, since the fish here tastes remarkably fresh. In addition to straightforward sushi combos and pieces, the menu has a bunch of creative specialty rolls. Take Sushi Ya’s Godzilla roll, for example. Who could say no to a massive bite of soft-shell crab, white tuna, salmon, yellowtail, mango and avocado topped with a sweet miso glaze? Not you. 1418 West Girard Avenue.

Los Jiménez
If it weren’t for Los Jiménez serving up tins full of tacos, burritos, nachos and quesadillas from their prime spot on 12th Street, you’d be hard pressed to find good Mexican food in the area, especially for $10 or less. The truck offers a variety of proteins, from standards like al pastor to even a jackfruit-based vegan option. 1924 North 12th Street.

Famous Hot Pretzels & Best Fresh Ground Coffee
The name really says it all. There are oodles of places on-and-off campus to get some sort of caffeinated beverage of varying quality and with long(-ish) lines. But this little shack — still standing by the bones of Paley Library after nearly 30 years — will always hold you down with a muffin and a 16-ounce iced coffee for less than $6. 1210 Polett Walk.

Honey Truck
Chicken sandwiches in any city are a dime a dozen, and few are truly firing on all cylinders. But, here, at this silver truck parked outside of the charmingly archaic Biology and Life Sciences building, you’ll find one of the most delicious chicken sandwiches in North Philly. Consider this: a thick slab of juicy fried chicken and a thicker hunk of fresh avocado between two soft buns with a little sweet chili to top it off. This is peak chicken-sandwich performance. Then consider their fried-fish burger, or shrimp burger, or veggie burger. Much to think about… 1924 North 12th Street.

The Crepe Truck
Beloved by students, this mother-daughter duo at 13th and Norris supplies the perfect handheld treat in sweet or savory form. All the crepes are customizable, so the combinations offered here are endless. But keep an eye out for seasonal specials, like their pumpkin-spice crepe packed with little bites of pumpkin cake. Or go with the classics like the Very Veggie: a crepe overflowing with literally every vegetable they have on board. 1291 West Norris Street.

Squared2
The concept at this recently debuted food truck seems both simple and excessive: a plain black truck focused on square, thick-crust pizzas topped with fun, gaudy combinations. Not to mention the pasta options, prepared in a massive cheese wheel. But upon trying the Angry Mike, which features spicy pepperoni drizzled with honey, they seem to have the right idea. 1924 North 12th Street.

The Fruit Salad and Smoothie Truck
When in a land of bagel sandwiches, tacos and pizza, sometimes all you want is a big bag of grapes. This cash-only truck serves pretty much nothing but the ripest, freshest fruit you can find on or off campus and can make any smoothie your heart desires within reason. North 13th Street & West Montgomery Avenue.