Here’s how to have your most delicious Eagles game ever. 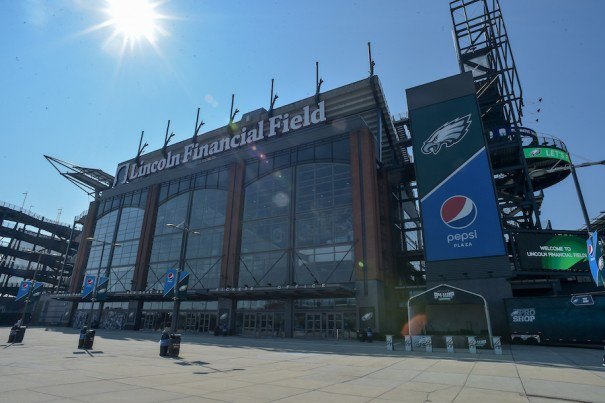 Your guide to all the best Lincoln Financial Field food options. (Photo by John Geliebter/Philadelphia Eagles)

You need an eating plan for your next Eagles game, and we’re here to help. After a long offseason, the Lincoln Financial Field welcomed visitors back on August 8th, and the season is officially in full swing. In addition to a handful of private and club spaces, the Linc is now home to a handful of new local businesses, as well as old classics. Read on for all our tips for your most delicious Birds game, ever.

Love & Honey Fried Chicken, section 108
One of the most beloved fried chicken makers in the city is now doing chicken tenders at the Linc, which might be enough to get your football-hating friends to join you for a game.

Jameson Bar, section 105/106
Jameson added a cocktail bar to the Linc this season, which means you’re no longer limited to only beer inside the stadium. One of the featured cocktails is called Tailgate Time, a whiskey drink with Pepsi and cold brew which sounds … energizing.

The Pierogi Place, Section 125
This Wildwood-based spot expanded all the way in the city and left us wondering why it took us this long to realize that pierogis are the perfect football food — warming, filling, and full of potatoes and cheese.

Two Locals Brewing, Section 132
Two Locals is so much a microbrewery that they don’t even have a space in the city yet, so the Linc is one of the best spots to try their beers.

Philips Steaks, section 101
Philips became the official cheesesteak of the Philadelphia Union last year, and now the West Passyunk-based shop has added another team to their roster.

Fuku, section 114
In 2018, celebrity chef David Chang’s chicken sandwich concept landed at the Linc, and it remains one of the better food options in the stadium. Opt for the spicy version, paired with their sweet and spicy jalapeño-seasoned fries.

Chickie and Petes, 21 locations
There are crab fries all over the stadium, and thank God, because we love them.

Philly Fry, section 113
This French fry-focused food truck offers loaded fries of all varieties, just in case you ever get tired of Chickie & Pete’s.

Zac’s Hamburgers, section 110
The location in the Linc is this family-owned business’s fifth spot — go for the Zac pack, which gets you four cheeseburgers, plus a jumbo order of fries.

It’s no secret that food and drink inside the stadium can be pricey. Here are a few spots to grab a bite beforehand, or to get in on the action without actually going into the stadium.

Philadium Tavern
After the game, stop by Philadium Tavern to take advantage of their Appy Hour special from 10p.m. to midnight, with discounts on their most popular appetizers, ideal for pairing with their extensive beer list.

Xfinity Live
Xfinity Live is not so much a bar or restaurant, and really more of a complex. The space has more than 50,000 square feet of sports bar, with capacity for more than 3,000 people. Kiosks are available for Geno’s Steaks, Victory Brewing beers, Lorenzo and Sons Pizza, and more. If you can’t get tickets to the game, this is the next best thing.

Chickie & Pete’s
Anyone who has ever gone to any Philly sports game knows the line for crab fries can get long, but that they’re an essential part of any Philly sport. Skip the line by getting your fix outside the stadium at the Packet Avenue location.

Ace of Steaks
Grab a cheesesteak or chicken cutlet sandwich on your way to the stadium to lay a nice foundation for all that tailgating you’re about to do.