Fried chicken is everywhere. Here are our favorite spots for some seriously crunchy birds. 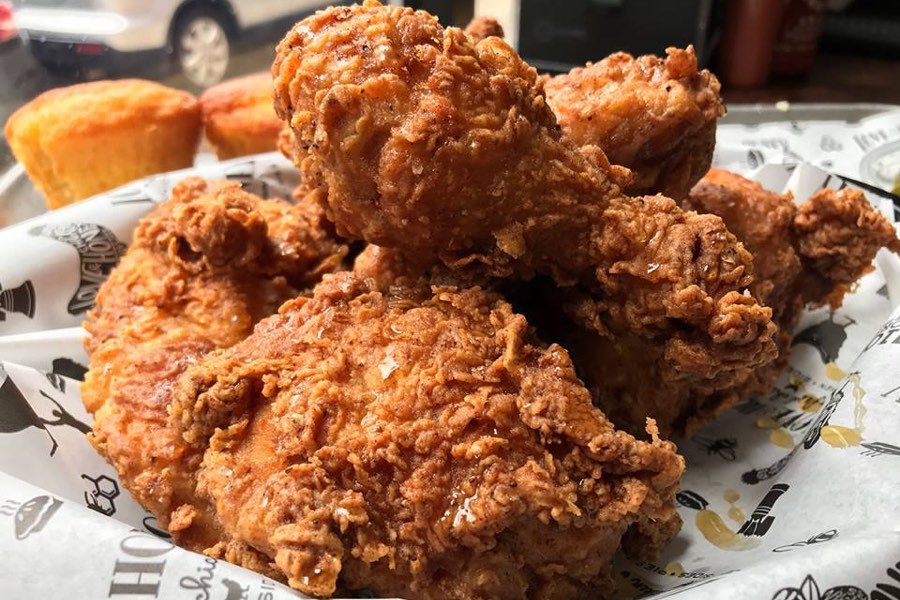 While Philly isn’t a traditional bastion of poultry excellence, its fried chicken game has gotten strong lately. Today’s restaurants have innovated, resurrected classic styles, and even won awards for dunking birds. So check out these joints (some new, some old) next time you feel like getting a little fried chicken in you. 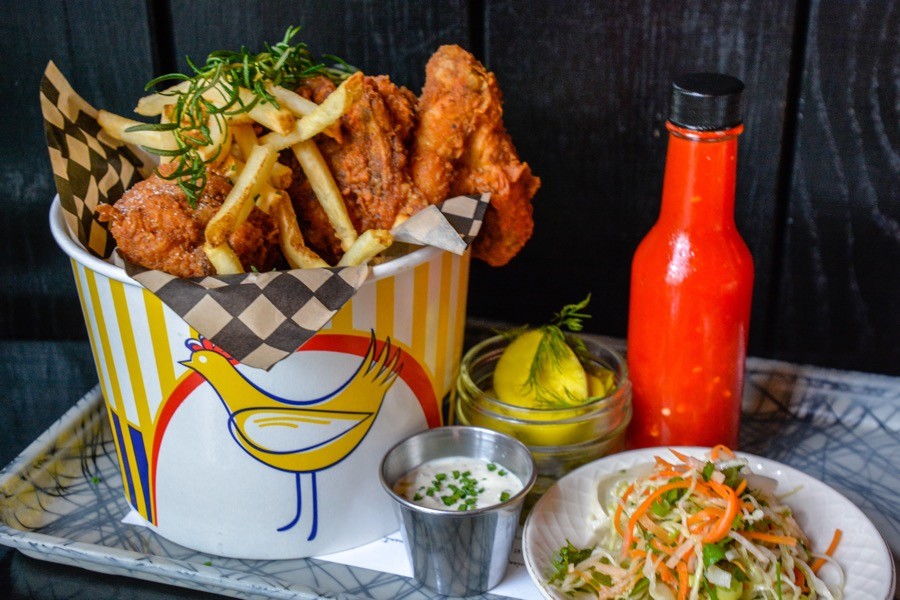 Bud & Marilyn’s, Midtown Village
Bud & Marilyn’s is keeping the hot chicken trend alive, offering a Nashville hot bun with pickles and ranch. And while it’s absolutely a great sandwich, what’s even better is the kitchen’s full-on fried chicken dinner — crisp and golden, perfectly juicy, served with warm biscuits, salted honey butter, pickled zucchini, and a house-made hot sauce that brings both the sweet and the heat to the bird.

Pete’s Place, South Street
An order from Pete’s Place requires at least one order of wings per person in my household, that’s how good they are. Even after a long drive in the delivery person’s car, they stay piping hot and very crunchy, a texture that I have missed quite a bit in the era of takeout and delivery.

Love & Honey Fried Chicken, Northern Liberties
Learning to make perfect fried chicken is easy: all it takes is a decade of practice and a willingness to spend the rest of your life in pursuit of one thing. Lucky for us, Todd Lyons made that sacrifice, and he and his wife Laura showcase the results in this little takeaway spot, serving excellent plates of chicken drizzled with a kiss of honey to an ever-growing legion of fans.

Hiro Ramen, Center City
Sure, the ramen is good. But they also offer Japanese fried chicken, marinated in soy, ginger, and garlic and served with a side of spicy mayo for dipping. Bonus: You can get it as a side as part of the weekday lunch special.

Speck’s Drive-In, Collegeville
If some of these newer spots represent upscale fried chicken, Speck’s (which has been around for more than 60 years) definitely falls on the casual side. This is throwback chicken — tender, juicy broasted birds (and bountiful sides) from a family operation founded back when Kentucky Fried Chicken was just a year old. It’s served fast-food-style across a counter, and there are families in the neighborhood who’ve been eating the buckets here for three generations. 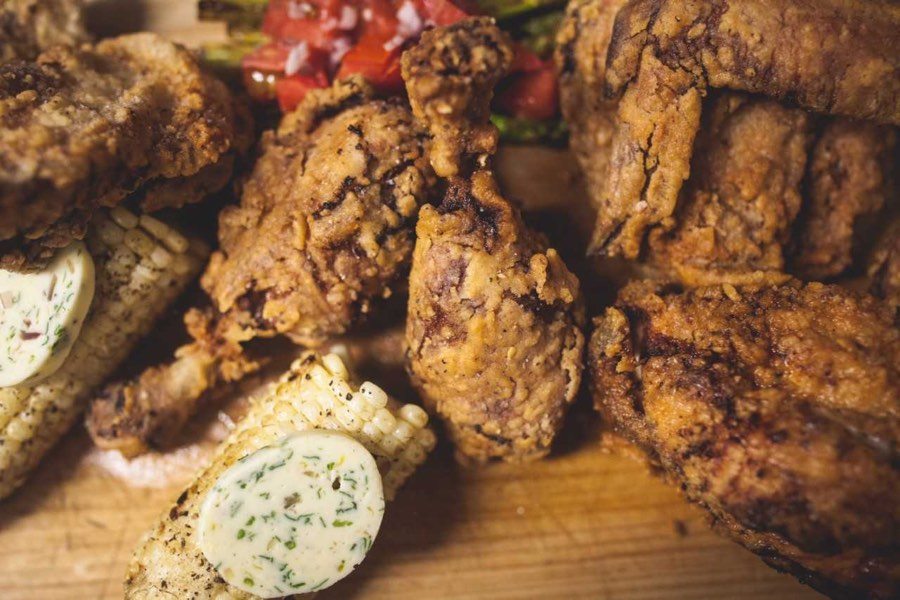 Prohibition Taproom, Spring Garden
Every Tuesday, Prohibition does a fried chicken and cider special with special hard ciders, whole (or half) fried birds, and seasonal, scratch-made sides. Every other night of the week, they’ve got a pretty good fried chicken sandwich, too.

Rex 1516, Graduate Hospital
Rex has been doing Southern food for years now, and you just can’t have a serious Southern restaurant without offering some serious fried chicken. Good thing this kitchen knows what it’s doing, with a fried drumstick and thigh and a rotating selection of sides.

Chunchik’n, Center City
Crunckik’n has a fried chicken for everyone: they serve up whole fried chickens, wings, tenders, and popcorn chicken. Bonus points for the option to mix sauces: we suggest Korean barbecue and and sweet chili. And though it’s not technically chicken, you absolutely must order a crunch ball, a large, deep fried rice ball that you won’t soon forget.

Baology, Center City
Taiwanese fried chicken bao with lemon aioli and Thai basil on a fast-casual menu in Philly? I guess not everything about 2018 is a garbage fire. Most of it, sure. But not multicultural, three-tradition fusion fried chicken.

Ms. Tootsie’s Soul Food Cafe and Keven Parker’s Soul Food Cafe, South Street and Reading Terminal
At Ms. Tootsie’s on South Street, the classic Southern fried chicken has long been one of the comfort food draws (ditto the chicken wings and waffles). And at Keven Parker’s Soul Food at Reading Terminal Market, that same fried chicken is served every day in a quicker, more casual environment where you can watch vintage Whitney Houston performances on a screen by the checkout while you wait for your platter. 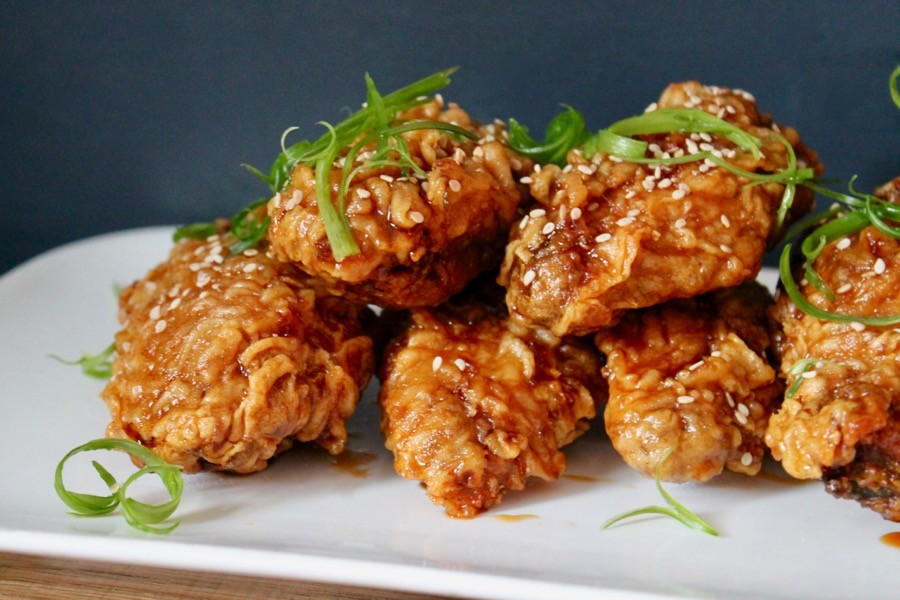 Southgate, Rittenhouse
From the minute it opened, Southgate was already doing some of the city’s best gastropub-style Korean fried chicken — fat wings and drums with candy-crisp skin dripping soy-garlic sauce or spicy gochujang. Now they’ve also rolled out the KFC at brunch, offering Korean fried chicken and waffles with a citrus-chile syrup and honey butter to go with the green tea Belgian waffle and double-fried chicken wings.

Foghorn, East Falls
There are different types of crispy when it comes to fried chicken: dense and crunchy, light and crisp, and then there’s Foghorn’s batter, which seems to exist in an in-between space of shattering nubs that are at once thickly layered and very airy. The side of housemade pickles is a nonnegotiable.

Cafe Ayla, South Philly
The Thai chili wings at Cafe Ayla are perfectly spicy and sweet, sizable drums and flats fried hard til they’re crispy then tossed in a housemade sauce that I wish they would bottle and sell. They’re listed as an appetizer but are a generous enough portion to serve as a main dish.

Memphis Taproom, Kensington
Look, at a certain point, Americans got so good at frying chicken that we just had to branch out. Hence the chicken-fried steak, in all its salty, artery-clogging glory. But it takes a special kind of twisted genius to take that culinary one-off and turn it back on itself, thereby creating the chicken-fried chicken that graces the menu at Memphis Taproom. Served with braised collards, mac ‘n’ cheese and a house-made hot mustard sauce, it’s a bold declaration of New Southern cuisine and the power of a Fryolator in the hands of a crew that isn’t afraid to use it. 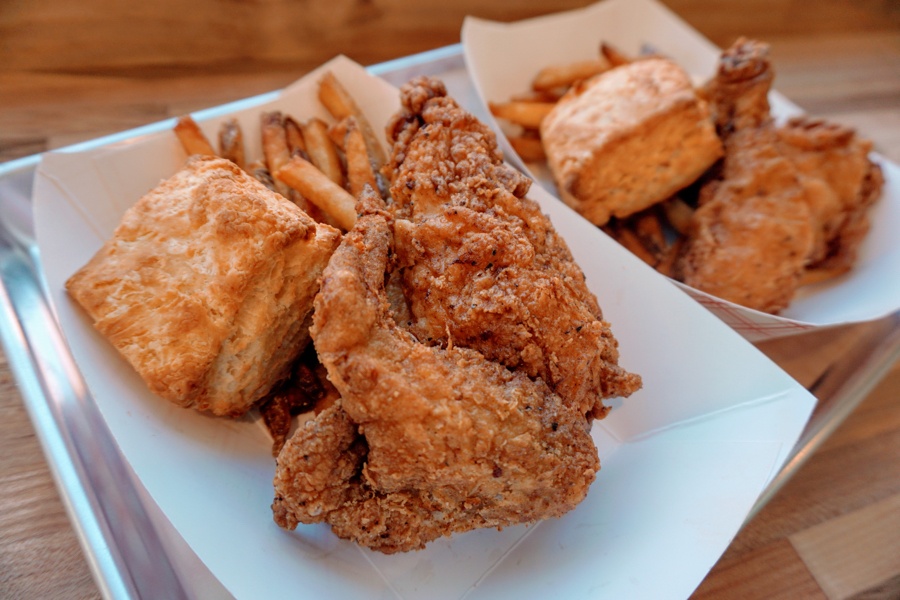 Redcrest Fried Chicken, East Passyunk
It’s enough that there’s a great fried chicken shack right on the Avenue. But what makes it even better is that they offer buttermilk or spicy versions, they scratch-make all their sides, and the sauces they serve with the chicken (particularly the garlic aioli and spicy honey) are fantastic all on their own.

ChiMcKing, Kensington
Tucked into a random side street off Girard Avenue is ChimMcKing, a Korean fried chicken chain that offers bone-in and boneless wings, plus a few other Korean specialties like ddukokki (stir-fried rice cakes) and beer—basically a perfect combination. The chain is based in Korea, and they import all their spices, sauces, and beers.

Stock Rittenhouse, Rittenhouse
Thai fried chicken on a Vietnamese banh mi with Japanese mayo and assorted vegetables might be one of the greatest arguments in favor of fusion cuisine I’ve ever heard.

Double Knot, Center City
No, not whole fried chickens or anything like it. But this award-winning restaurant does Japanese-style fried chicken nuggets served with daikon and Kewpie mayo. Also probably heroin because there’s no way these things aren’t provably addictive.

Clarkville, University City
Years back, partners Leigh Maida and Brendan Hartranft won awards for the world-beating fried chicken they did at Resurrection Ale House. And while Clarkville’s plate of perfectly golden, crisp-skinned fried chicken thighs (served with a side of pickled onion ranch sauce) isn’t exactly what Resurrection did back in the day, it’s a worthy successor. 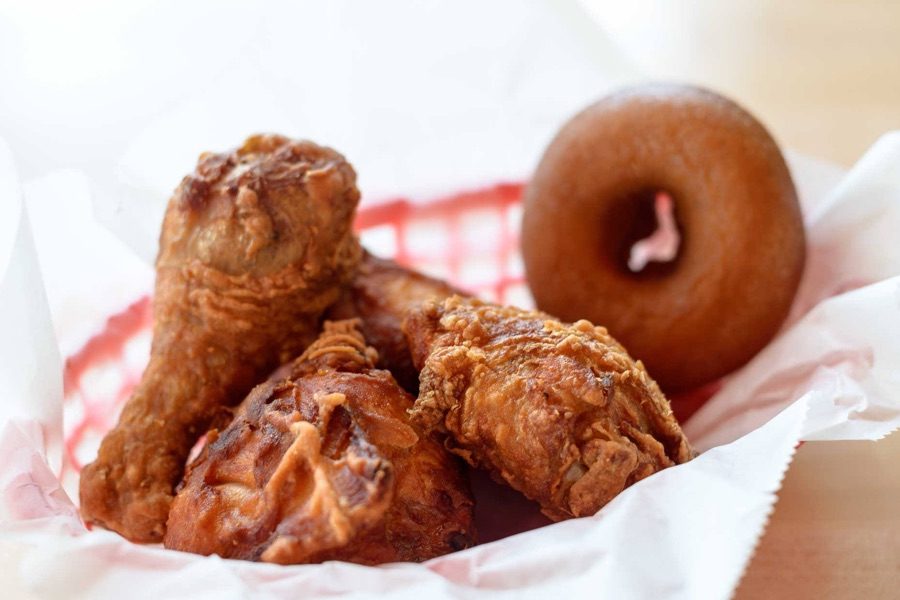 Federal Donuts, Multiple locations
No list of great fried chicken in Philadelphia should ignore the genius and mastery of Federal Donuts. Yes, there was fried chicken in the city before Michael Solomonov and his partners opened their first combination fried chicken and donut shop, but FedNuts definitely raised the stakes with their awesome glazes and seasonings — and then went and raised it again when they added their buttermilk ranch fried chicken sandwich to the menu at every shop.

Andy’s Chicken, Fishtown
This is Korean fried chicken from a simple takeout space in Fishtown, done with lots of skill and zero pretension. The original, sweet chile and honey garlic are gentle, but the hot and spicy has a little more bite. The couple of additional Korean dishes on the menu (bulgogi, kimchi fried rice) should always be skipped in favor of tacking on one more order of perfectly cooked chicken.

Wishbone, University City and Midtown Village
Most of the places on this list fry whole and half chickens. Some of them do wings. Wishbone, though, is the only one that deals exclusively in chicken fingers. That’s right, it’s a craft chicken-finger restaurant, and it is awesome. White or dark meat, scratch-made dipping sauces and a buttermilk-pretzel crust? Bring it on. Also, the hand pies and weird-ass sodas are a nice draw, too.

Chunchik’n, Center City
Crunckik’n has a fried chicken for everyone: they serve up whole fried chickens, wings, tenders, and popcorn chicken. Bonus points for the option to mix sauces: we suggest Korean barbecue and and sweet chili. And though it’s not technically chicken, don’t miss their crunch ball, a large, deep fried rice ball that you won’t soon forget.