Just like the rest of us, Philly bakeries, restaurants, and bars are all in on the Eagles’ playoffs run. 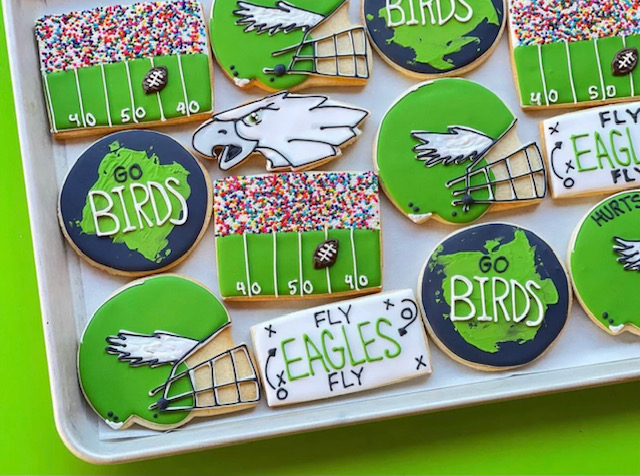 When the Eagles are in the playoffs, we suddenly want to ingest green things that should never be green. What would otherwise look unappetizing and downright unsettling deserves its moment of emerald hue. Namely green beer and green hot dogs.

Just like the rest of us, Philly bakeries, restaurants, and bars are all in on the Eagles’ playoffs run. So if you’re looking for a way to cater your watch party or just celebrate with some green-dyed treats, consider these specials. 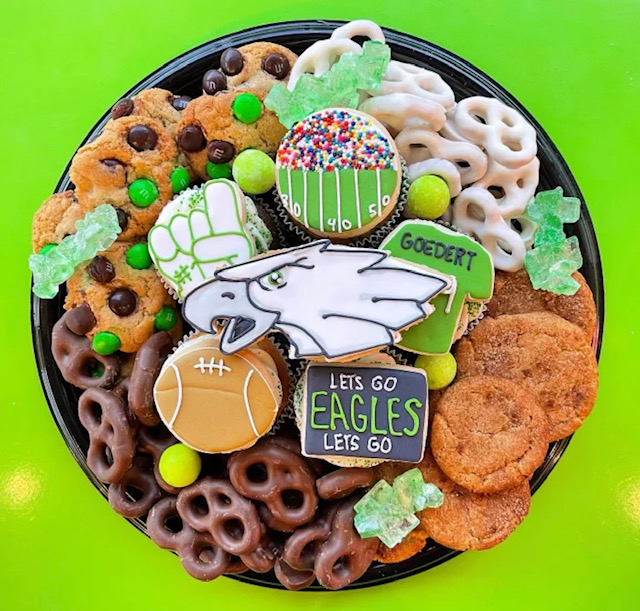 Best of Philly-winning cookie artist Madison K has cupcakes, cookies, cookie cakes and sweet trays with various Eagles-related designs. Whether you’re looking for jersey-topped cupcakes or helmet-shaped cookies, head to her Northern Liberties shop on game day to pick up your goodies. You can also pre-order on her website if you have your heart set on something specific. 800 North 2nd Street, Northern Liberties. 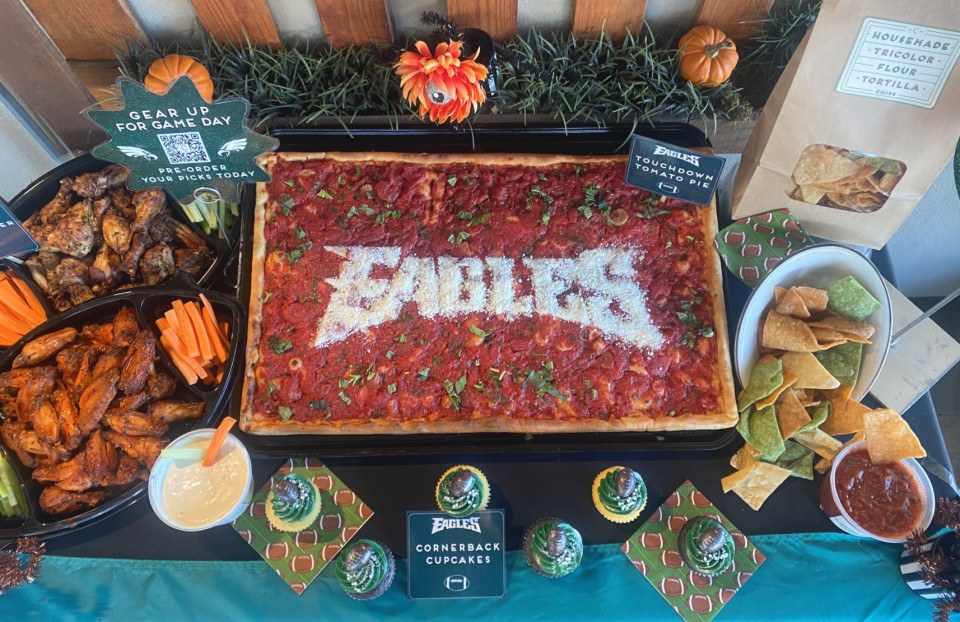 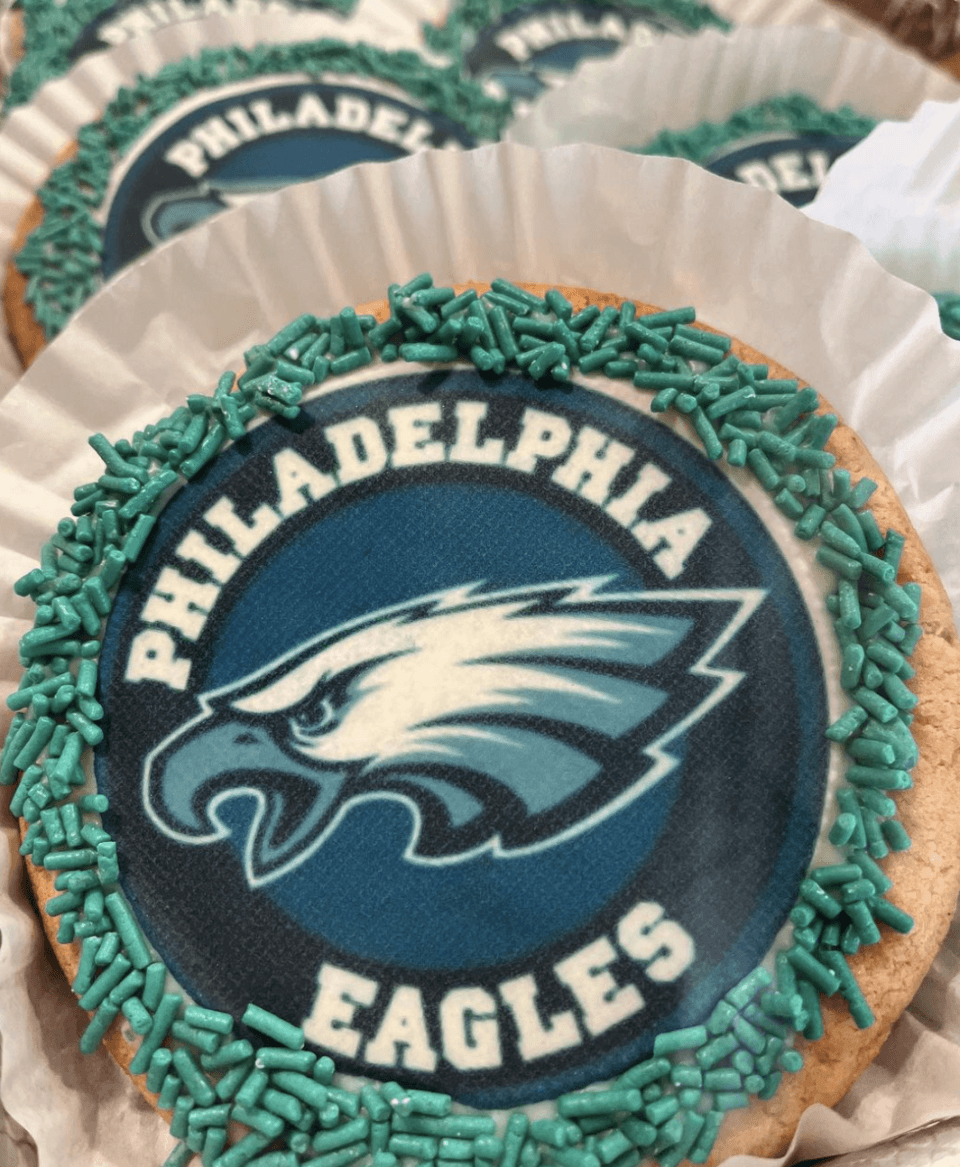 Eagles cookies, Eagles layer cakes, Eagles cannoli. South Philly’s iconic Isgro’s has every Eagles-themed baked good you could possibly imagine. They’ll have treats in-store and recommend you call ahead of time to make sure you get what you want. But while it’s good to plan ahead, don’t pick up ahead; Isgro’s fills cannoli day-of so they don’t get soggy. If you’d prefer to be an early Bird, go for the cannoli chip-and-dip platter (with green-dyed dip, of course). 1009 Christian Street, South Philly. 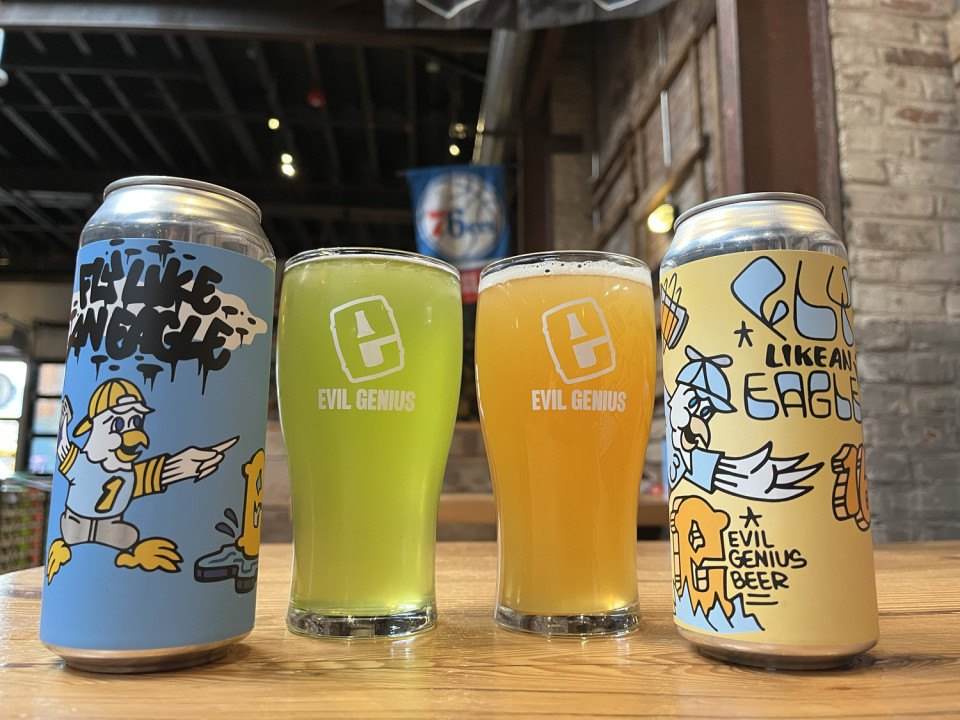 Evil Genius Beer Co. is giving fans two ways to celebrate: the debut of an “orange creamsicle IPA” dubbed Playoffs!?!, plus the return of their “wooder ice milkshake-style IPA” called Fly Like an Eagle. Playoffs!?! is available for around $12 in six-pack form across the region (including Giant supermarkets), while Fly Like an Eagle is available exclusively at Evil Genius’s Fishtown taproom. The latter is available in two flavors — mango and blue raspberry — and brewed with vanilla and lactose as well as over 100 pounds of fresh mango puree and over 15 gallons of blue raspberry slushy syrup, respectively. It’s also available in four-packs for $18 at the taproom only. 1727 Front Street, Fishtown; six-packs at various locations. 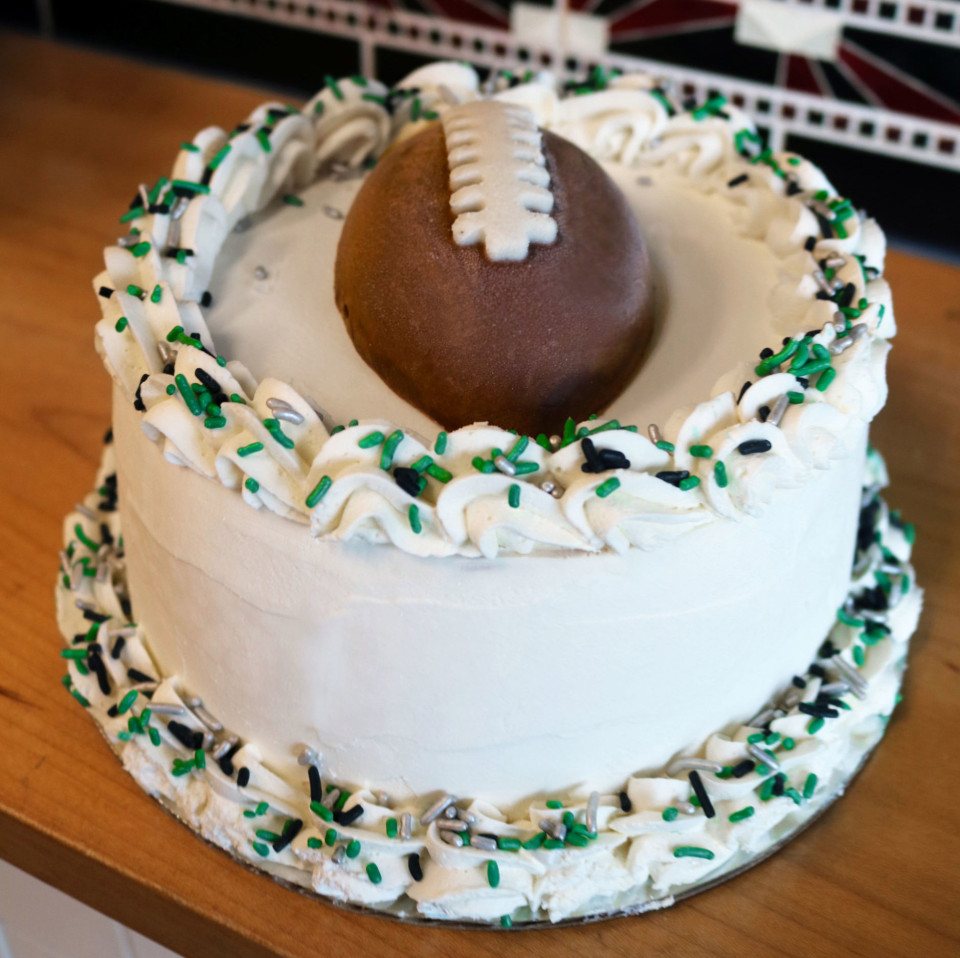 Franklin Fountain’s chocolate-and-vanilla ice-cream cake is festively green and topped with a molded ice-cream football. In between layers of ice cream, there’s house-made fudge and gluten-free chocolate crumble. The cake costs $40 and will serve five to six people. Pre-order in advance and pick up in the store. 116 Market Street, Old City. 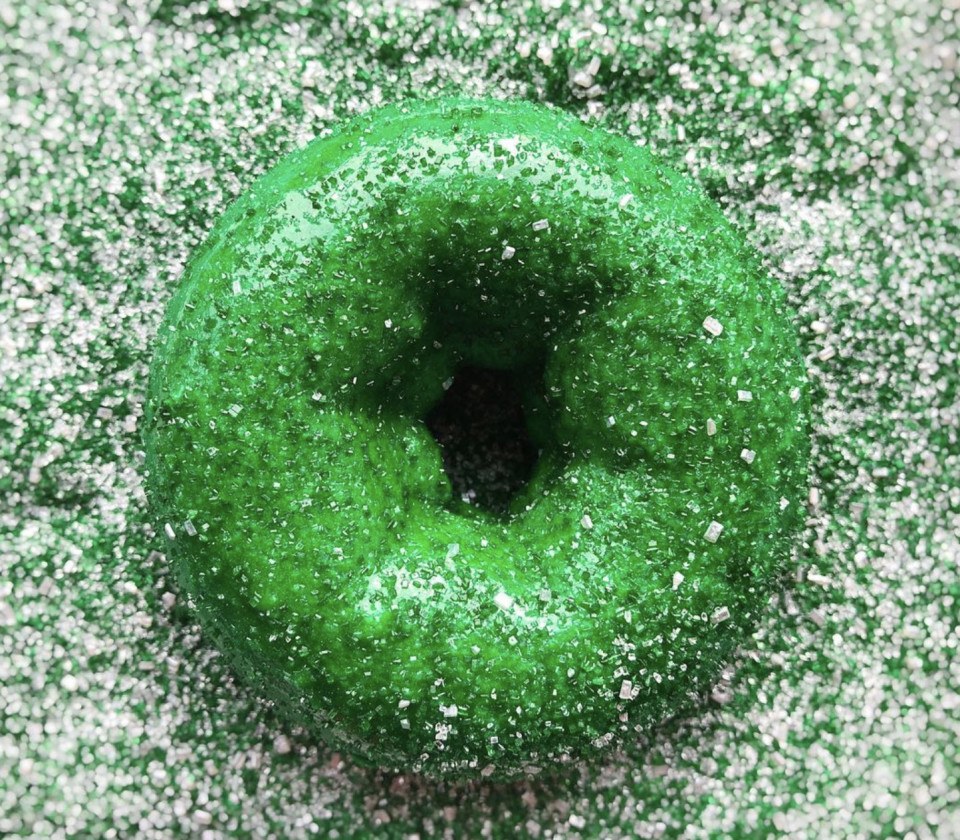 “The Iggle” from Federal Donuts

Head to all Federal Donuts locations on Saturday and Sunday this weekend for the return of “The Iggle.” This “fancy” is a classic spice-cake doughnut with bright green white-chocolate glaze and topped with green and silver sanding sugar. Grab ’em until they sell out. Various locations. 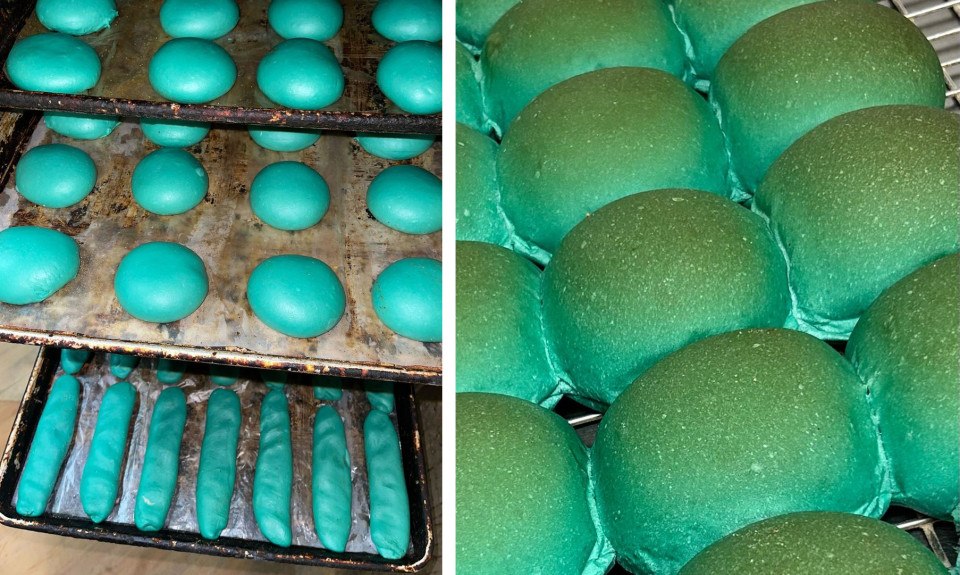 Cacia’s green rolls, before and after / Photographs courtesy of Cacia’s Bakery

When this South Philly bakery provided the green-dyed rolls for Dietz & Watson’s viral Bird Dogs (more on those later), the interest and demand was higher than they could have expected. So they decided to make them for all, and now they are here for you in case you’d prefer to stuff your rolls with something besides a hot dog. They also feature round green rolls, as well. 1526 West Ritner Street, South Philly. 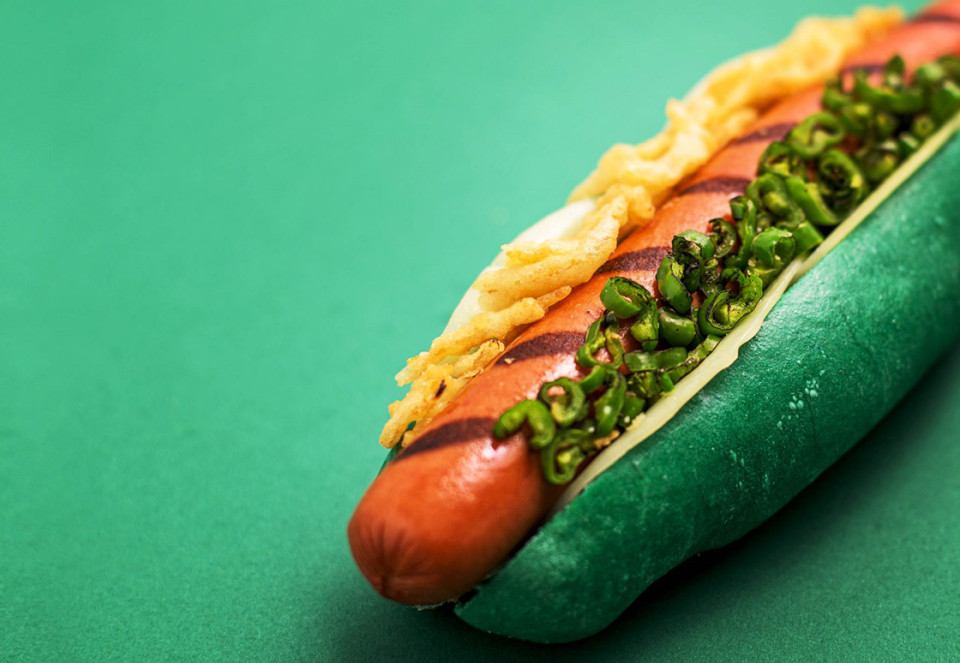 “Bird Dogs” are Eagles-themed hot dogs served in green buns and topped with long hots, provolone and fried onions. You can follow their schedule online or on their Instagram for more impromptu visits from the truck. (Which is somewhat like a hot-dog fairy on wheels.) Here’s the scoop: On Thursday, January 26th, you can catch them at a Rittenhouse Square pep rally from noon to 3 p.m., and then South Square Market (2221 South Street) from 4 to 6 p.m. They’ll also be hanging around the stadium lots on Sunday from noon to 3 p.m. for all you hungry tailgaters. Various locations; follow on Instagram. 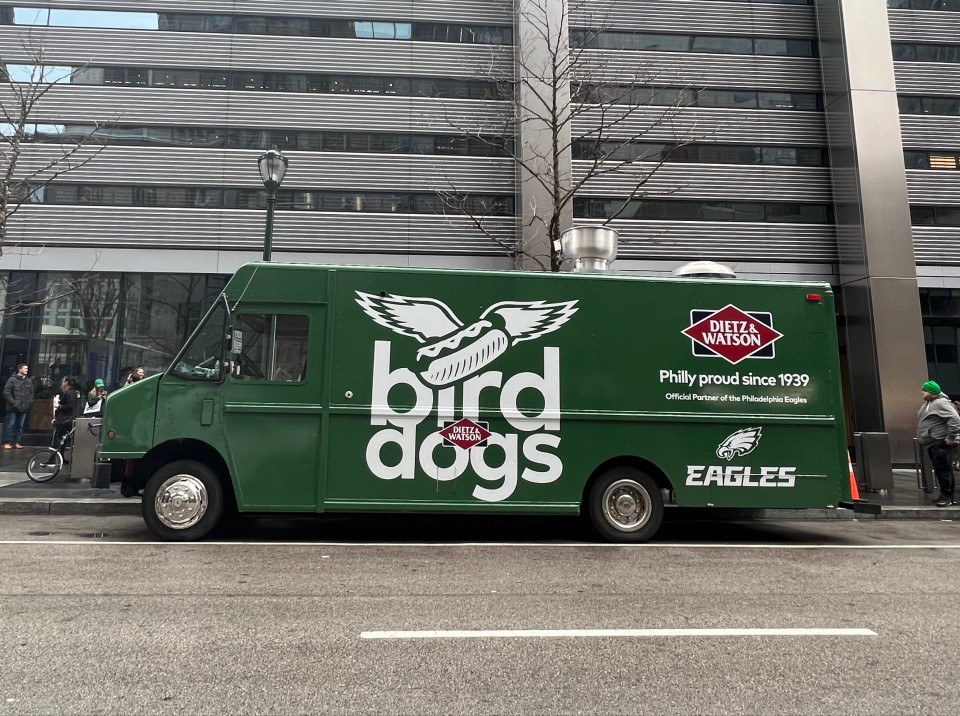 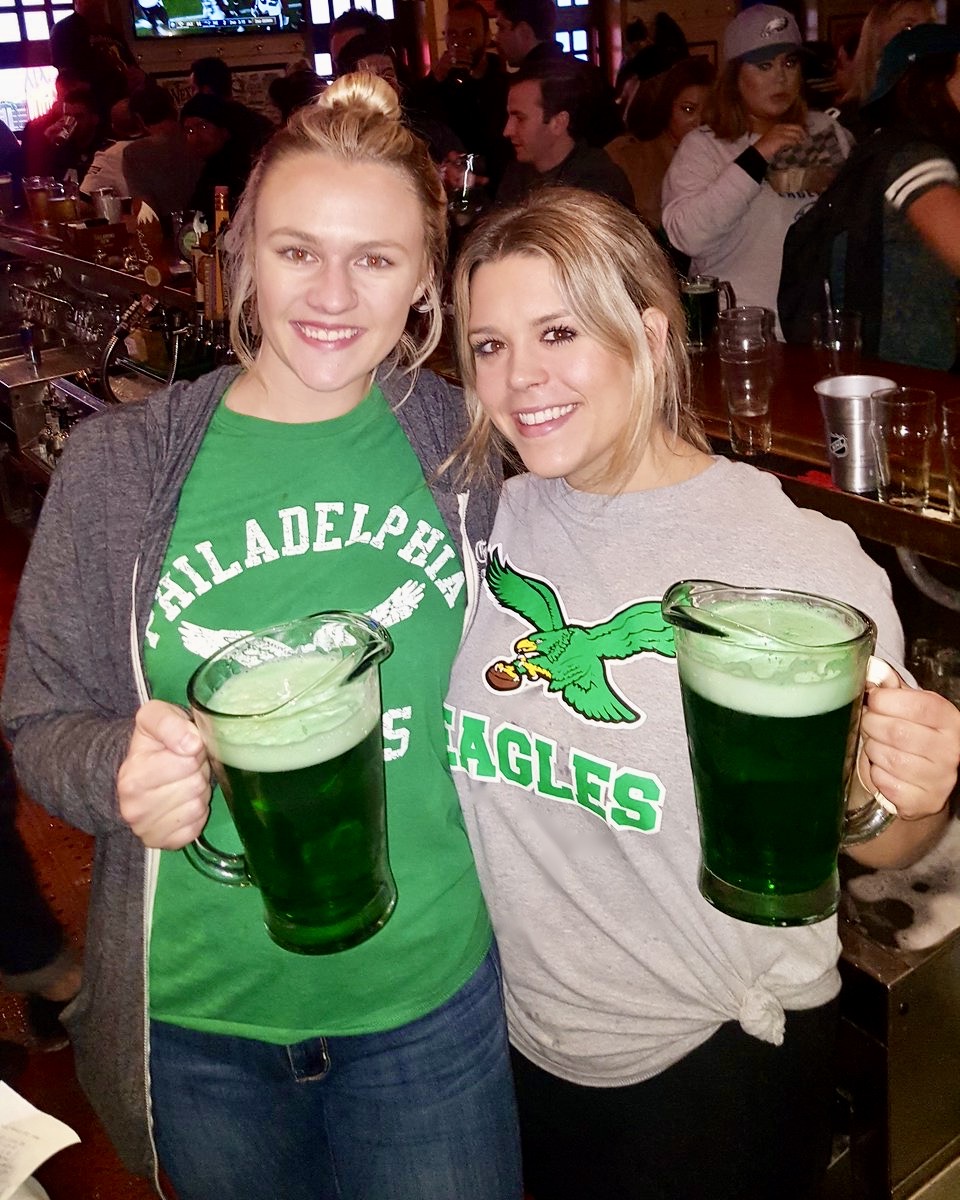 If you’re looking to watch the game somewhere besides your couch, you could do worse than one of Philly’s oldest bars. To get hyped for the Eagles, McGillin’s is going all out with green beer. (This is only the second time in 163 years that they’ve served green beer other than St. Patrick’s Day, they tell us. The other time was 2018, and we all know how that went.) They’ll have additional food and drink specials for the game, including the “Iggle-tini.”1310 Drury Street, Midtown Village. 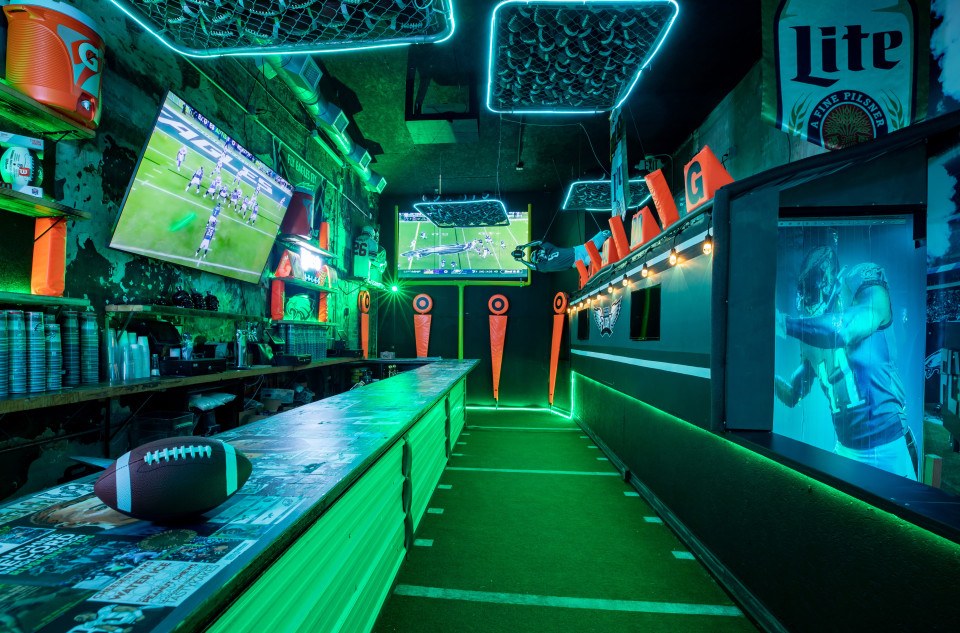 Tinsel gets an Eagles-themed makeover / Photograph by Cody Aldrich

Another in-person place worth a visit: Tinsel Takes Flight. This Eagles-themed iteration of Tinsel is awash in green, with memorabilia, art installations, murals, photo ops galore, and themed drinks like “Swole Batman” and “Hurts So Good.” It’s open now, and will run for the rest of the season … however long that is. Keep in mind: This is probably best for a pre-game visit rather than a place to watch the game; while there are TVs, there are no seats. 116 South 12th Street, Midtown Village.