And why you should be pairing mezcal with cheese. 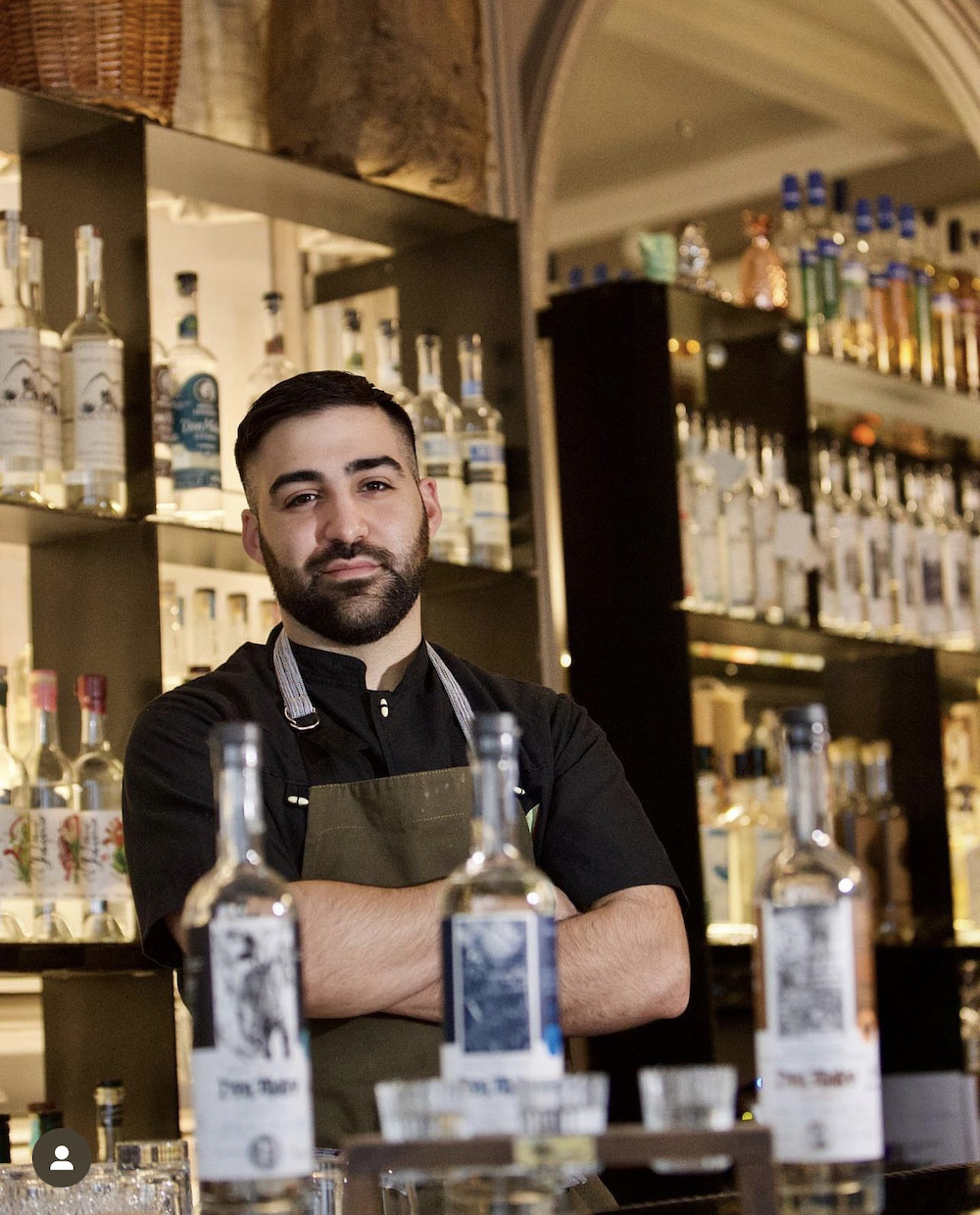 Behind the Line is Foobooz’s interview series with the people who make up Philly’s dynamic food and beverage scene. For the complete archives, go here.

When Dan Suro is working behind the bar at his family’s longtime Mexican restaurant Tequilas, he doesn’t hold back from sharing stories — the good, bad, and the ugly — of an agave plant’s journey into a finished cocktail. To Suro, every mezcal poured is a chance to connect with a place and a producer.

Through his experiences traveling in Mexico, Suro has seen firsthand how regulatory policies are suppressing small farmers and exploiting agave’s fragile ecosystem. Suro returned to Tequilas in 2020 after working in tequila production at his father’s spirt brand, Siembra Spirits, and then later as a bartender at the Franklin. At Tequilas, he feels a responsibility to carry traditional small-batch spirits that are untouched by machines, while also modernizing Tequilas’ cocktail menu. I sat down with Suro to talk about his quest for transparency behind agave spirits and his mission to educate drinkers at Tequilas and beyond.

I grew up in … The suburbs of Philadelphia. My whole family is from Southwest Philly, but when I was four or five, we moved to Lower Merion on the Main Line. I would go back to South Philly to hang with my family since there was nothing to do [on the Main Line]. For me, there was no community there.

I started at Tequilas … During summers when I was in grade school. I would work in the kitchen. Then, in high school, I got onto the floor and I was bussing. I thought I really loved it, but I was frustrated that I couldn’t move up to be a server or bartender. My dad kept saying, “You’re not ready.” So I left when I was 18 and thought I would never come back. I worked in the music industry doing studio guitar work, I did construction for a little bit, then I started working more closely with Siembra Spirits on that side of the industry instead of in the restaurant.

Something you might not know about the tequila boom is … It dates back to the mid-1800s when the Sauza and Cuervo family brands first exported tequila to the United States — mezcal back then was still known as “vino mezcal” but started to gain some popularity. Before the industrial revolution or “El Porfiriato” in 1910, President Porfirio Díaz initiated a railroad network from Mexico to Texas that passed through the town of Tequila. So this was one of the key factors in mezcal from Tequila getting super popular in the United States, because of accessibility. Then you think about Prohibition and the World Wars, the market shot through the roof but was very hard to maintain because of the plant’s slow growth.

In order for tequila to be called tequila … the spirit must contain at least 51 percent blue Weber agave. Blue agave, the only species used for tequila since the 1900s, gives you about seven kilos to create one liter of tequila. It takes at least seven years to grow. So you can imagine the stress it puts on the environment when feeding a market like the U.S. Fast forward to now, we’re doing millions of liters a year, leading to dangers in farming practices.

One trip I’ll never forget is … I was in Michoacán, Mexico with some botanists, social workers, artists, photographers, chefs, and a crew of bartenders. Everyone was looking at the agave industry, which is in a really delicate state right now because we’re using up the resources like crazy, there’s a bunch of socioeconomic problems, and the U.S. is the biggest market in the world for it. One of the conclusions this group came to was that bartenders are one of the most significant players in this role. We’re the middlemen; we’re educators.

I moved over to the Franklin after … a trip with Siembra Spirits. The owner of the Franklin Mortgage & Investment Company at the time, Jason Elliott, came with us, and we really clicked. He was like, “Hey we’re looking for a door guy. It could be cool to come to work and step back into the industry.” I always loved the cocktail scene and was fascinated by it. I went from being a door guy in July 2018 at the Franklin to a barback, server, bartender, bar manager and head bartender opening their tiki-bar-turned-mezcaleria concept (the now-closed Encima) within two years.

My ideal day off is spent … doing nothing or reading. I read a lot of comic books for escapism. I’m currently catching up on a Joker series, starting the East of West volumes, and re-reading my favorite comic of all time, Sandman. Otherwise, since I live on top of Tequilas, I stick around the neighborhood and usually go to Jose Pistola’s to try out new tequila they’ve got in.

I spend way too much money on … sushi. But it makes me feel great.

My approach to growing Tequilas’ bar program is … modernization and structure. We took some research and development trips to New York, doing the East Village thing and [going to] Brooklyn’s Clover Club. After that, our menu got better. The staff was more invested; they had a part of themselves on the menu.

I like to organize my selection of spirits behind the bar … like a library. From left to right are registered mezcals, from Oaxaca to Michoacán, Durango, and other regions. The center shelves hold different agave and spirits like Raicilla and Sotol, and further right on the top shelf are first-generation tequilas of Siembra, like 2005 Siembra Azul Blanco — the first tequila we ever produced. There’s also a section for private batches (100 liters) made just for us.

When I’m thinking about creating new drinks for the menu … we look at the last cocktail menu to see what people liked and did really well, and make things new. Like in our classics section, we’re doing a Clover Club but we’re using Mexican prickly pear and orange-blossom gin from Condesa in Mexico City so it’s a really cool blend of culture and history. This is what Tequilas has always been: a bridge between Mexico and Philly. We used to be more go-with-the-flow, but now we’re more structured with seasonal menus.

You should pair mezcal and cheese together because … they share a lot of flavor qualities, but also cheese and traditional mezcal producers have so many similarities when it comes to denominations of origin. The laws of cheese-making in Europe were adapted to Mexican tequila, so the histories are really similar. We recently paired Comté cheese with Raicillas, the former of which is an example of producers getting together when they were hit with regulations to make it impossible for bigger corporations to industrialize. The flavors went well together, too. We have some beautiful pairings that will be a really cool vehicle for those conversations. We’re going to do more meat, cheese, and mezcal pairings.

I travel for work and for pleasure … about three times a year. I have the privilege of loving what I do. Recently I went to Guadalajara to guest-bartend at one of my favorite bars for their anniversary, De La O Cantina, with Jon Bamonte of Vernick Fish. In the past, I’ve brought Philly bartenders down to see production from various tequileros and mezcaleros or traveled to see agave batches in the works at the start of production. Guadalajara is starting to feel like home and southern Jalisco is really special to me because it’s where I first saw mezcal produced.

One story from Tequilas that’s important to me is … about Tommy and Edith Ramirez, a brother and sister who traveled with their parents at the age of nine and 12 in 2013 to the U.S and now work at Tequilas. They’re here under Deferred Action for Childhood Arrivals (DACA) status. Something that doesn’t get talked about enough is the difficulty of being here without your family and being alone all those years. It’s hard to find a career that’s fulfilling and important without the support of your family readily available. Tequilas hosted industry nights to raise money for paperwork to apply for their “extended parole-in-place” and to send Edith and Tommy back to Mexico on a work trip

What I love most about Philly is … its character. Philly is a brutally honest city where people give you their real selves. I don’t think there’s anyone who might be better at reading a personality than a Philly industry worker — you deal with so many people a day, you really get a sense of who they are.

You can pick up Siembra Spirits bottles at Benash Liquors & Wines in Cherry Hill for your own bar at home.