Plus, a new negroni bar at Royal Boucherie and the Refectory reopens on the Main Line. 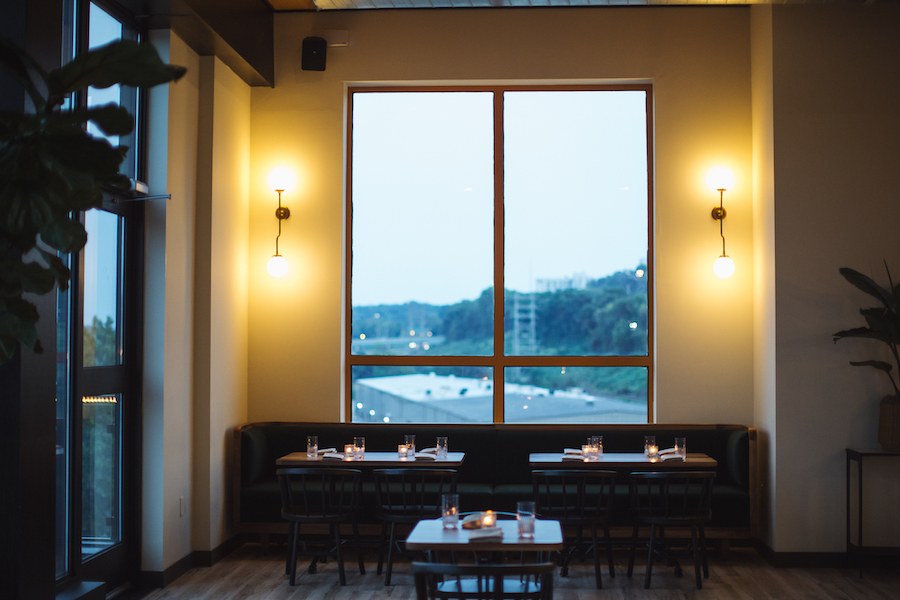 Back when I started this column — when I was pitching it as a way to round up the week’s news at a time when restaurant news was almost all bad — there was an honest (and not inconsiderable) fear that there wouldn’t actually be enough news to fill something like this every week.

My, how things have changed.

This week, we’ve got everything from a new restaurant being opened by one of the biggest names in the scene, a Philly legend heading out to wow ’em in NYC, and where to go to eat eight pounds of seafood in a single sitting, to alien abductions (with cocktails), conversations about death and a candy-coated Halloween makeover at  Fashion District Philadelphia. And I’m not even including the news about Michael Solomonov and Jen Carrol rappelling down the side of a Center City skyscraper, because there just isn’t space.

So let’s get to it, shall we? There’s a lot to cover this week, and I think we’ll start with …

Getting High in Bala Cynwyd

Nick Elmi (Laurel, ITV) and Fia Berisha (ex of Elements and Mistral) are doubling-down on the Main Line with the opening of Lark at the Ironworks in Bala Cynwyd.

Back in March, Elmi and Berisha (partners at BE Hospitality) opened the Landing Kitchen at the Ironworks at Pencoyd Landing — right on the river, across from Manayunk. Landing was an all-day café concept, offering coffee and breakfast sandwiches, tartines and pastries, fried chicken, prosciutto on toast and grilled cheese with caviar. 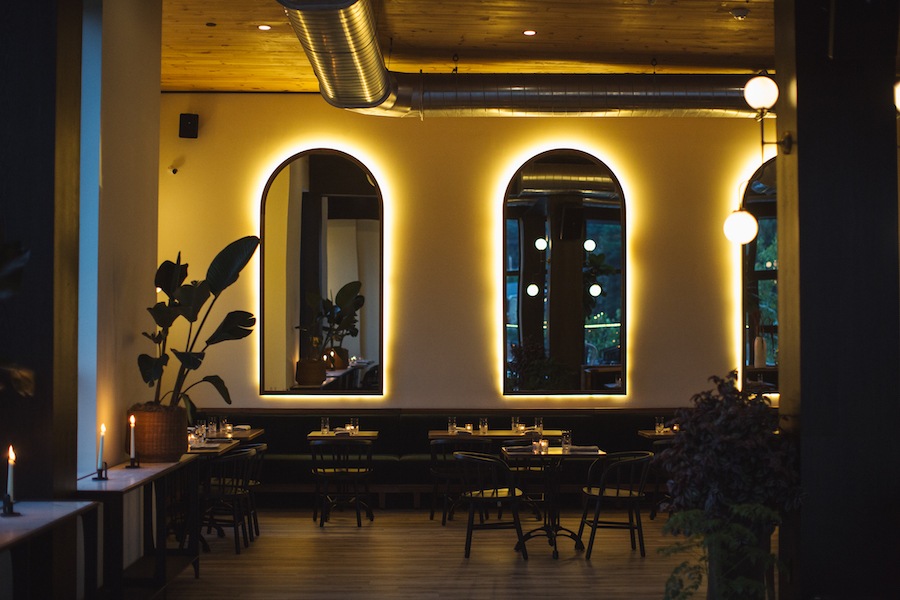 The dining room at Lark | Photo by Neal Santos

Lark is being billed as the Landing’s “sister restaurant.” Located on the 7th floor of the same building, with a rooftop dining room, terrace seating and treetop views across the river, Lark opened over the weekend with a coastal Mediterranean menu and minimalist vibe. We’re talking handmade pastas and lots of seafood, sea urchin deviled eggs with caviar, Jersey scallops with guanciale vinaigrette and grilled short rib with black pepper bone marrow butter.

So high-end, yeah. And with a view. There are local craft cocktails and a well-considered wine list featuring lots of small producers, plenty of seating options and event spaces. Right now, Lark is open Wednesday through Saturday, 5 to 11 p.m., with expanded days, hours, private lunches and a happy hour program in the works.

I loved Royal Boucherie back in the day. Not everything about it, for sure, but it was one of those places that grew on me as I kept finding myself back there night after night — in a window seat or at the bar, falling back on it as a comforting, familiar option during a particularly bad run of meetings and review dinners a couple years back.

Anyway, back then? Royal Boucherie had Nick Elmi written all over it. He’d opened it with partners Stephen Simons and David Frank (Royal Tavern, Khyber Pass, Royal Sushi Izakaya among others) but, earlier this year, left and handed the kitchen over to chef Matt Buehler so that he could focus on his restaurants and his two new projects in Bala Cynwyd (see above).

Buehler and his team have made Royal Boucherie their own. No longer quite so idiosyncratically French, it’s a bit pared-down now but remains a neighborhood hang-out. To wit, the bar crew is overhauling their summer Spritzer Bar concept and turning it into a fall/winter Negroni Bar. And it works like this: Pick a gin, pick an amaro, pick a fortifier, then sit back and watch the tender stir up your custom Negroni. There are various options for each step in the process. You like Aviation and Aperol with a Cocchi kicker? They can do that. Hendricks, Fernet and Lillet Blanca? That’s cool, too. I didn’t do the math (because I’m lazy), but there are a lot of potential options. So go nuts, kids. World the way it is outside? We may as well stay drunk all the time, right?

Speaking of which, Royal Boucherie also re-started its happy hour program last week: $5 drafts, $6 house wine, $10 craft cocktails, plus snacks like a $12 charcuterie board, macaroni gratin for $8 and steak tartare for $10, just to name a few.

Plus, starting this week, the joint is adding on a Tuesday dinner service — meaning they’re now up and running Tuesday to Sunday, 4 to 10 p.m. And I hear they’re thinking about adding on a brunch soon so, you know, watch this space …

Back in August of 2019, Villanova announced that a big, fancy new restaurant was going to be opening on campus. The Refectory, at 862 Lancaster Avenue, was that restaurant.

It opened the doors in the fall of 2019 under Greg Dodge and Zavino Hospitality Group (Zavino, Tredici Enoteca), and it was a big place — 200 seats, easy. Unfortunately, it didn’t last long because it, like everything else in this industry, shut down when COVID hit.

During the shutdown, ZHG had its own issues to deal with, and they pulled out of the deal with Villanova — never really having had the chance to prove whether or not a place as big as the Refectory could work on campus. Now, though, a new team is looking at making it work. Ken Kearns (of 118 North in Wayne), Chris Perella (of Ardmore Music Hall and 118 North), chef Biff Gottehrer (of Ripplewood in Ardmore, the Music Hall AND 118 North), along with GM Steve Khuu (ex of Enoteca) are giving it a go, and under their command, the new(ish) Refectory will be opening today.

So what’ve they got under the hood? Well, for starters, Michael Murray and Gio Flores in the kitchen doing a little bit of everything — mushroom soup, shrimp cocktails, house-made pastas and flatbreads, blackened mahi-mahi, fish and chips and roasted chicken with salsa verde and roasted carrots. There are craft cocktails at the bar, lunch starting on November 1st and a brunch service scheduled to roll out in mid-November, and you can check out all the details right here. Dinner service is up and running starting tonight and will run Mondays through Saturdays.

Time for some Leftovers, I think.

Pinefish is upping the ante with two new offerings. First, there’s “The Ocean” — a massive seafood bowl that offers seven whole-ass pounds of sea creatures that you can eat. We’re talking a pound each of clams and mussels, three soft-shell crabs, a pound-and-a-half of snow crab, another pound-and-a-half of Dungeness legs, two ears of corn and some spiked butter to go with it. Want to supersize that? That’s cool. How ‘bout adding an extra pound of king crab legs, just for fun? And to wash it all down, Pinefish has also added three new cocktails to their bar menu, designed by Le from Hop Sing Laundromat.

The Ocean will run you $130 ($170 with that extra pound of sea spiders). The menu says it’s supposed to serve two, but you know what? I think you can knock that thing down all by yourself.

You can do it, friend. I believe in you. 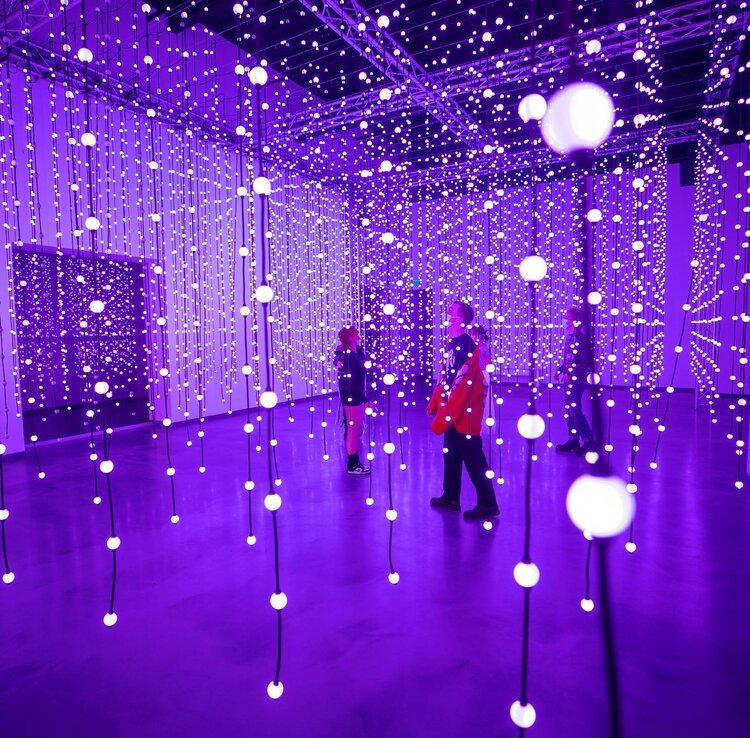 Meanwhile, over at Fashion District Philadelphia (27 North 11th Street), there’s this: Wonderspaces Philadelphia, a kind of ever-evolving art show-slash-installation that takes up something like 20,000 square feet with multiple interactive exhibitions, has added a bar. Which, honestly, I think it needs because some of the stuff they’ve got going on there might require a drink (or three).

Like there’s the VR film called “Dinner Party” which is all about the 1960s UFO abduction case of Betty and Barney Hill as seen from both of their perspectives — which you will experience from inside your virtual reality headset. And “Before I Die” by Candy Chang, which is (and I’m quoting here) “a global participatory public art project that reimagines our relationship with death and with one another in the public realm.”

But hey, Wonderspaces is also reopening their bar and debuting a bunch of signature cocktails to go along with it. And if anything is going to make the virtual reality exploration of a 1960’s alien abduction more palatable, it’s going to be going into it fortified by some Faber gin and dragonfruit juice. Or so I hope.

Speaking of Fashion District Philadelphia, they’ve still got Candytopia running there (on its final extension through early January), and the place has now been re-outfitted for Halloween. That means inflatable marshmallows, a candy scarecrow, corn stalks filled with candy corn cobs, spiderwebs, candy pumpkins, regular pumpkins, classic Halloween candies and pig butt cannons loaded with orange and black confetti. (And no, I don’t know what a “pig butt cannon” is either, but I kinda want to find out, don’t you?)

So if you’re interested in what is likely to be the closest thing you’ll ever find to visiting Wonka’s workshop without the aid of some very powerful hallucinogens, this should absolutely be your jam. And if you can’t make it for the Halloween festivities (running from October 28th through 31st), they’re promising that there’ll be another holiday makeover when we get a little closer to Christmas.

Finally this week, there’s this: It looks like the crew from South Philly Barbacoa is headed out for a three-day pop-up at Rockefeller Center at the end of the month. From the 29th to the 31st, they’ll be bringing their award-winning barbacoa to the Big Apple ahead of Dia de los Muertos on November 1st.

Unless you’re planning on spending Halloween in Midtown Manhattan this year, there’s really no way that this is of any use you to any of you reading this. But I just like the notion that when New York needed tacos, they called Philly to help them out.

And I like it even more that when their three days in the big city are done, the South Philly Barbacoa team will be coming right back home to us.