Driving Routes 70/72 to the Shore: Where to Stop for Amazing Pies, Ice Cream, and Tacos Al Pastor

This amble through the Pine Barrens has a rustic sort of charm, with abundant farm stands and forested back roads lusher than any highway. 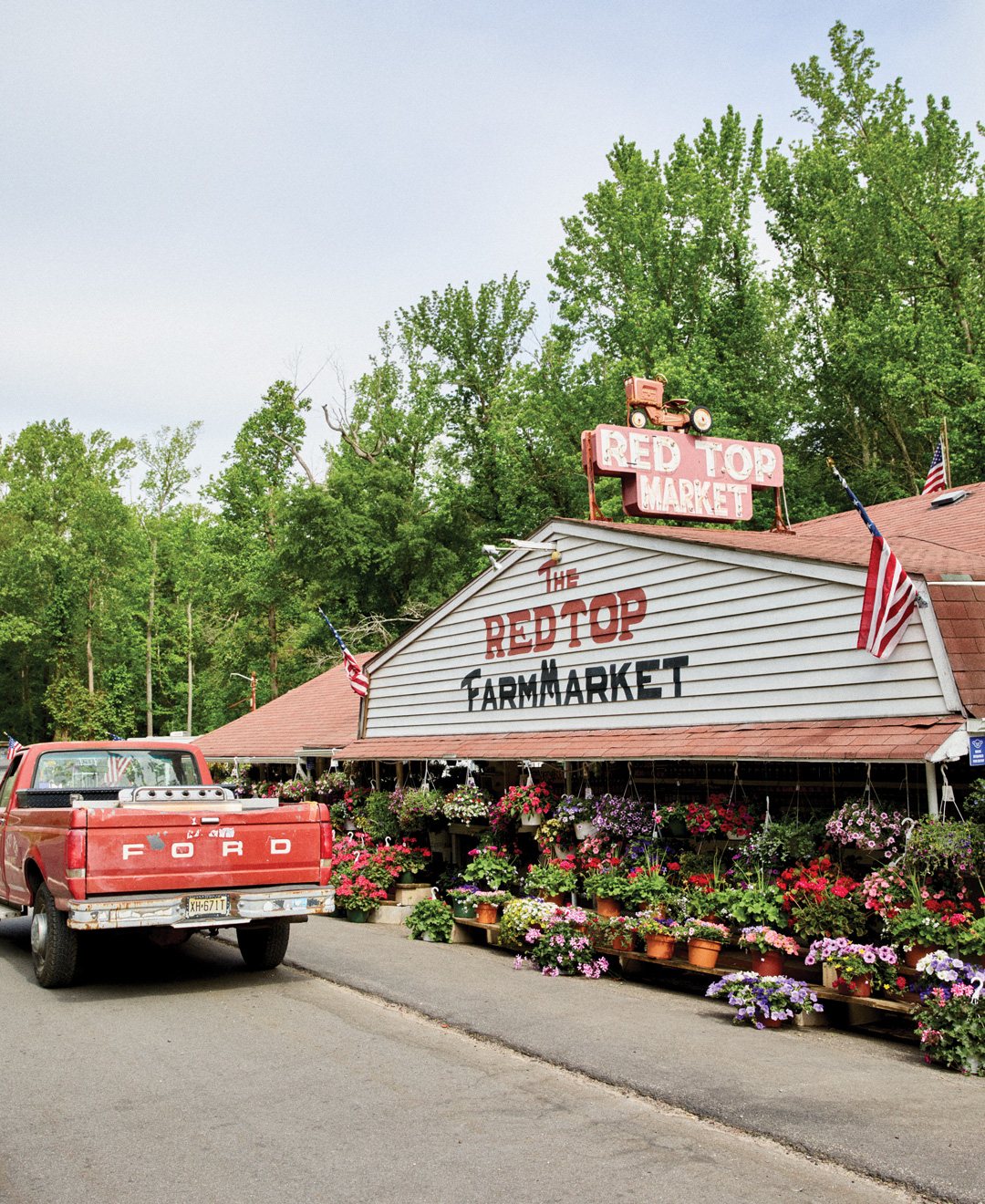 Red Top Farm Market in Vincentown is one Route 70 food stop you need to make en route to the shore. Photograph by Michael Persico

This amble through the Pine Barrens has a rustic sort of charm, with abundant farm stands and forested back roads lusher than any highway. And should you need to get your CB radio fixed, we’ve got the perfect spot for you.

With stops in Southampton, Vincentown, Tabernacle and Barnegat

Since 1949, Evergreen has existed like a beacon, reminding people headed east for the Shore that there’s civilization (and breakfast sandwiches) in the pine forests between Cherry Hill and LBI. An unironic throwback to roadside-luncheonette chic, the joint jumps open to close, slinging diner breakfasts, quick lunches, root-beer floats, tall, twisty soft-serve cones, and a seemingly endless stream of ice-cream specials like Cowboy Sunday campfire s’mores sundaes and “Blue Milk” blueberry shakes for May the Fourth. 1643 State Route 70, Southampton. 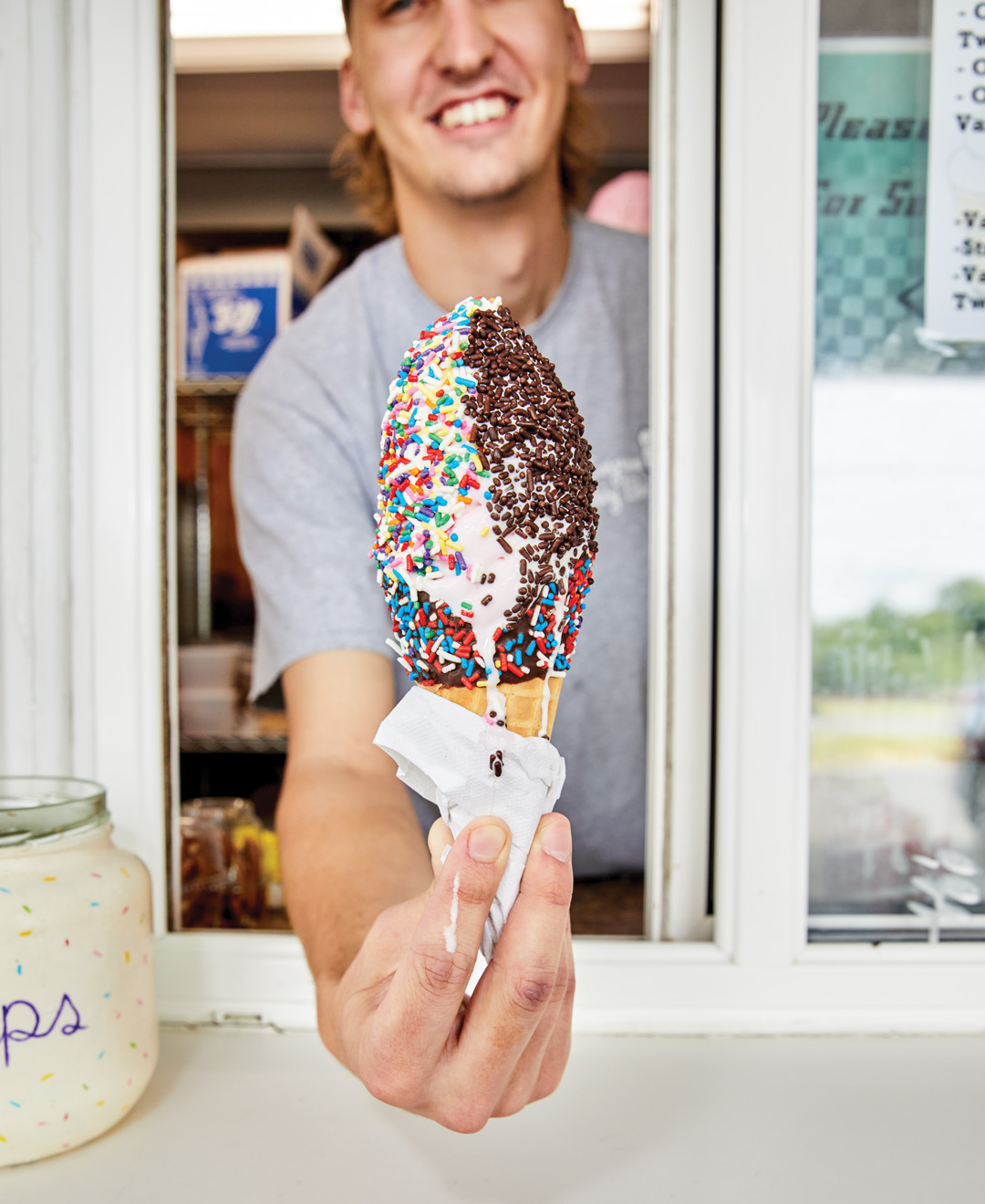 An ice-cream cone from Evergreen Dairy Bar in Southampton. Photograph by Michael Persico

So say you want to get your CB radio looked at and get a root-beer float, but you only want to make one stop. Boy, are you in luck. The White Dotte Dairy Bar and electronics shop has been splitting its time between audio systems and peanut butter fudge crunch sundaes for more than five decades now. They also hand-make orange sherbet and sweet black cherry shakes, the latter of which is a rarity almost everywhere. The menu includes fried pickles, cheesesteaks, burgers and dogs (including “White Dotter” versions topped with ketchup, mustard, onions, pickles and Whiz), and the whole place is 10 pounds of charming in a five-pound bag. 2345 U.S. Route 206, Southampton.

There are two farm markets operating right next door to each other, both on the north side of Route 70. One’s called Red Top; the other is Green Top. They’re two separate businesses,­ run by two different families. The markets have operated side by side for something like 90 years, though there’s no ­Hatfield-McCoy drama, no trash talk or midnight sabotage. At least, not so far. Most folks making the drive treat the two as one super-size market and bop between them, picking up local produce, fresh clams (when they can get ’em), homemade jam and blackberry cider, shrubs and flowers, herb starts, local honey, goat-milk soaps (at Red Top), and hand-carved tiki statues (at Green). 1801 State Route 70, 1811 State Route 70, Vincentown. 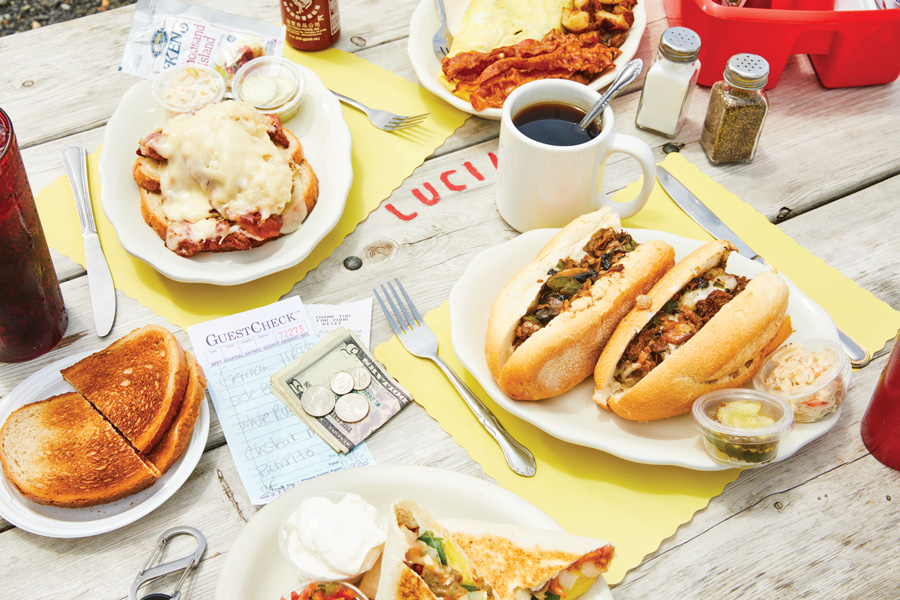 If you’re on your way to see the Emilio Carranza monument (and you should be — he was the Charles Lindbergh of Mexico!), drop in at nearby Waller’s — a deli tucked away in a rundown strip mall that looks like the kind of place you’d roll into after dark to dump a bunch of dead car batteries. Seriously, though, while there are a lot of little delis and quick-stops along this route, none holds a candle to Waller’s. The scrapple fries with sriracha ketchup and bacon-cheese tots alone are worth pulling over for, and the breakfast burritos are a magnet for early risers trying to get a jump on Shore traffic. (P.S. — The Tabernacle outpost of Leo’s Ice Cream Company is next door, if you’re looking for some house-made water ice to wash down those tots.) 1572 U.S. Route 206, Tabernacle.

When you pull up to Village Pub, you’d be forgiven for guessing, as we initially did, that maybe the place has been closed due to fire and/or mortar attack. But no, it’s open, and it’s great — a weird, friendly blue-collar neighborhood bar absolutely beloved by the locals (and wise road-trippers) for the killer talent in the kitchen. Under normal circumstances, ordering the snow crabs and veal Christof at a roadhouse would be a bet not worth taking, but here? Go for it. You won’t be dis­appointed. 539 Chatsworth Road, Tabernacle.

Lucille’s is a lunch-counter stop made famous by Anthony Bourdain when he dropped by for scrapple and eggs and tales of the Jersey Devil. But this spot deserves more credit for the homemade pies stacked up along that counter, for sale every day until they’re gone. Granted, grabbing a bite and some coffee with the locals is fine, as is checking out all the newspaper clippings and Devil lore tacked up on the walls. But taking a peach pie to-go and eating it on the hood of your car while staring out over the Atlantic? That’s living. 1496 Main Street, Barnegat. 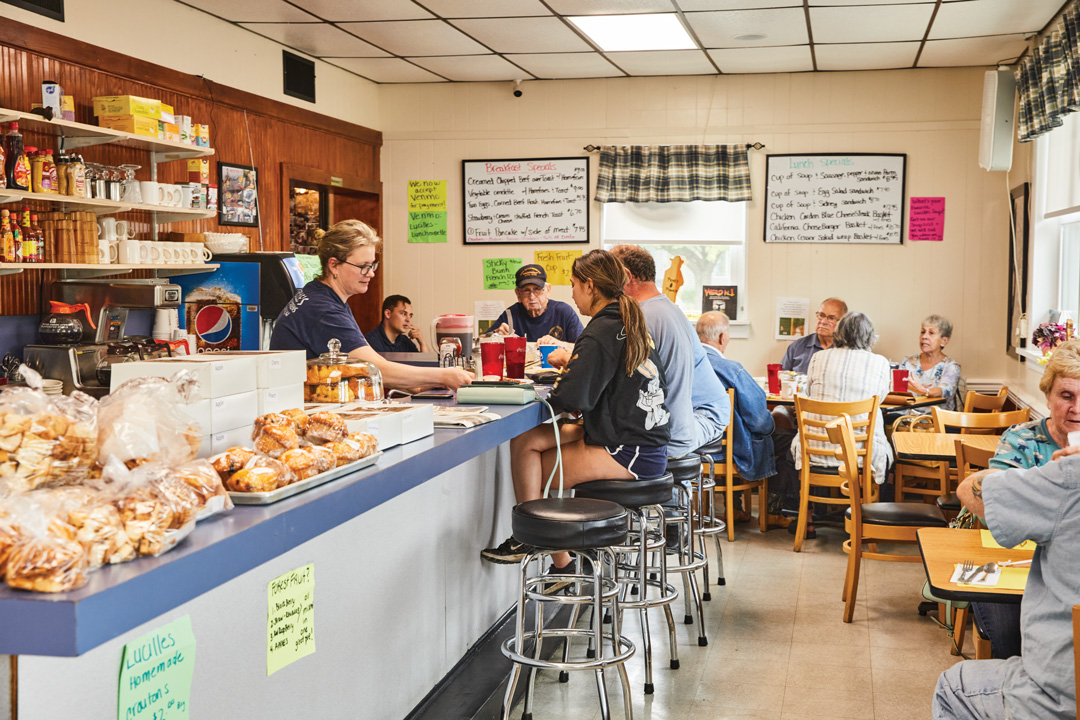 The kitchen is hopping. The ceiling is hung with bright paper flags (a.k.a. papel picado). There are Mexican love songs playing on the radio and chips and salsa on the table, and everything about La Jarochita feels like a party. But the real draw is the food: tacos al pastor with that sweet hit of pineapple, soupy black beans and rice, platters of enchiladas that could feed an entire table, all gracefully delivered in a packed dining room. Not a great place if you’re looking to have a conversation, but for tacos and chilaquiles, this is the spot. 449 East Bay Avenue, Manahawkin.

Did you know the Hindenburg went down in New Jersey? You can visit the site of the disaster: In non-COVID times, tours are offered every Wednesday as well as on the second Saturday of each month. Check online — nlhs.com/tours — and call to reserve your spot. 563 Saniuk Road, Lakehurst.v

Bird and Betty’s opened in Beach Haven on Long Beach Island in 2019, but due to COVID, the place is still new to most Shore-goers, who might remember the site as the former home of old favorite Ketch Bar & Restaurant. (Before that? It was the Acme Hotel, a favorite of Babe Ruth.) Anyway, today, Bird and Betty’s is a fun retro restaurant — try the clam pizza! — that after dark morphs into a casual nightclub … with Skee-Ball. 529 Dock Road, Beach Haven.

Published as “Routes 70/72” in the “On the Way to Cape May” guide in the July 2021 issue of Philadelphia magazine.