A man left a server nothing at a Main Line restaurant after she asked him to follow the rules. But the community rallied in her support. 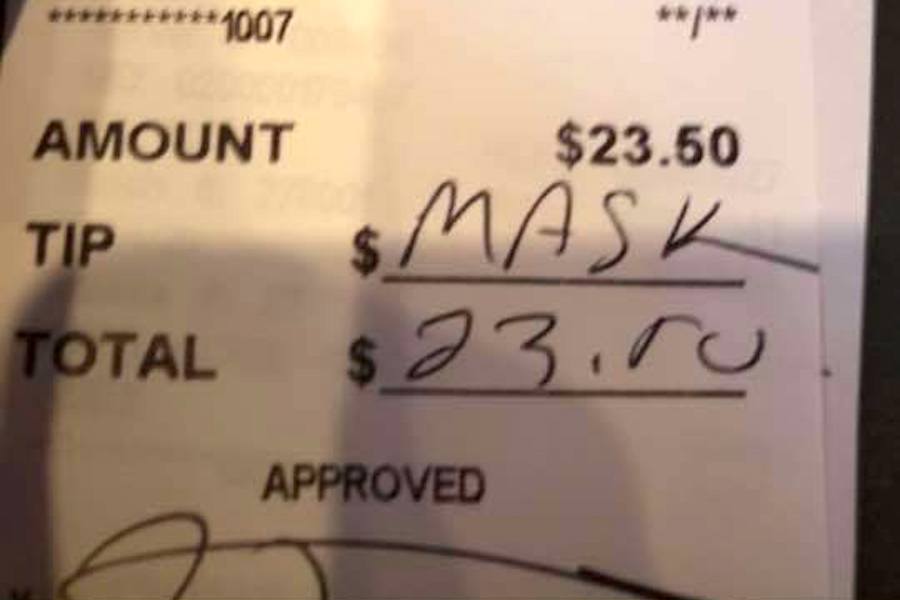 A credit card slip from John Henry’s Pub, a restaurant in Ardmore. The customer who signed it was apparently unhappy that his server had asked him to wear a mask while not seated. (Photo via John Henry’s Pub)

I’m sure that a lot of you have been overtipping at restaurants during COVID. I know that’s what I’ve been doing. But some people… well, some people take a bit of a different approach.

On Sunday night, a man was at John Henry’s Pub, a popular tavern in Ardmore. It’s the kind of place where you might get some potato skins, a burger or prime rib sandwich and a cold beer while you talk to your neighbors. Friendly, unfussy and unpretentious.

But one very distinctive thing about John Henry’s Pub is that while some restaurants in the area are taking COVID precautions less seriously than others (you know who you are), John Henry’s Pub ain’t playing no games.

There are signs posted by the entrance, instructing all customers to sanitize their hands upon entry and wear a mask until seated, and these rules are enforced. Politely enforced, but enforced nonetheless.

The restaurant also asks (“asks” being the key word… it’s not a requirement) all customers to put their name and contact information on a sign-in sheet, just in case there’s a COVID issue and contact tracing is required. Basically, John Henry’s Pub is doing what everybody else should be doing, and when it’s all said and done, they deserve an award.

OK, so back to the man who was at the restaurant on Sunday night. He stepped outside, and when he came back in, he didn’t have a mask on. So his server, Jamie Ledwith, asked him to put one on until he was seated. 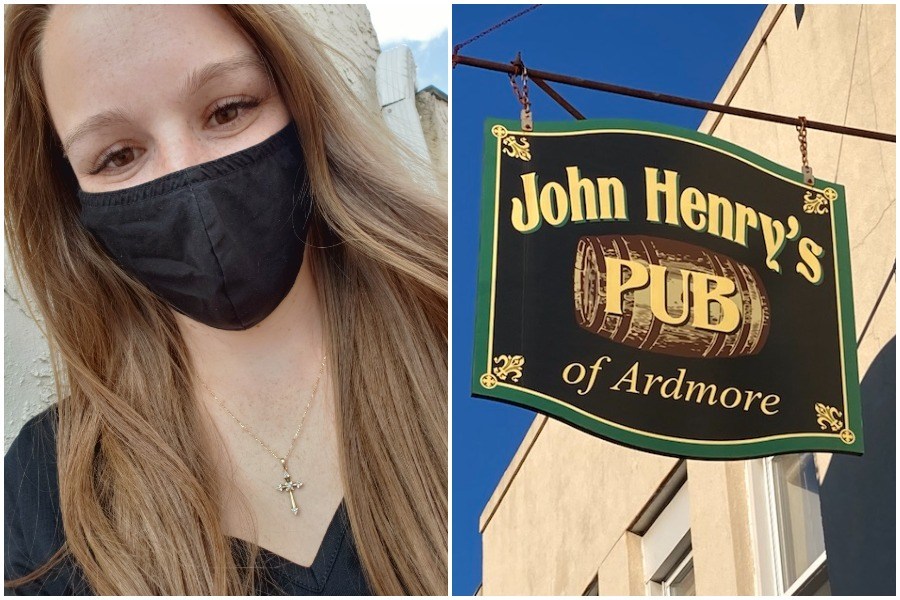 “He kind of brushed it off,” recalls Ledwith. “He said it wasn’t a big deal that he didn’t have a mask on. And I told him that it wasn’t my rule, it was just the rule.”

There was no angry confrontation. No “COVID rage” or “mask rage” or whatever term they use to describe the behavior we’ve seen in all those viral videos of people losing their shit inside grocery stores and the like. No, this man took a much different, much quieter approach.

Shortly after Ledwith asked him to put a mask on, he whipped out his American Express credit card and handed it to her. She returned with a credit card slip, and instead of leaving her a 15 or 20 or, preferably, a 25 or 30 percent tip, he simply wrote “MASK” on the tip line. That’s right. He stiffed his server, apparently because he didn’t like being told to wear a mask when he wasn’t in his seat.

Ledwith immediately showed the credit card slip to Kathy Kearney, who has owned John Henry’s Pub with her husband for the last 15 years.

“She was taken aback,” says Kearney of Ledwith, a single mother who lives in the North Wales area. “She felt that she didn’t deserve that kind of treatment. And she was right.” 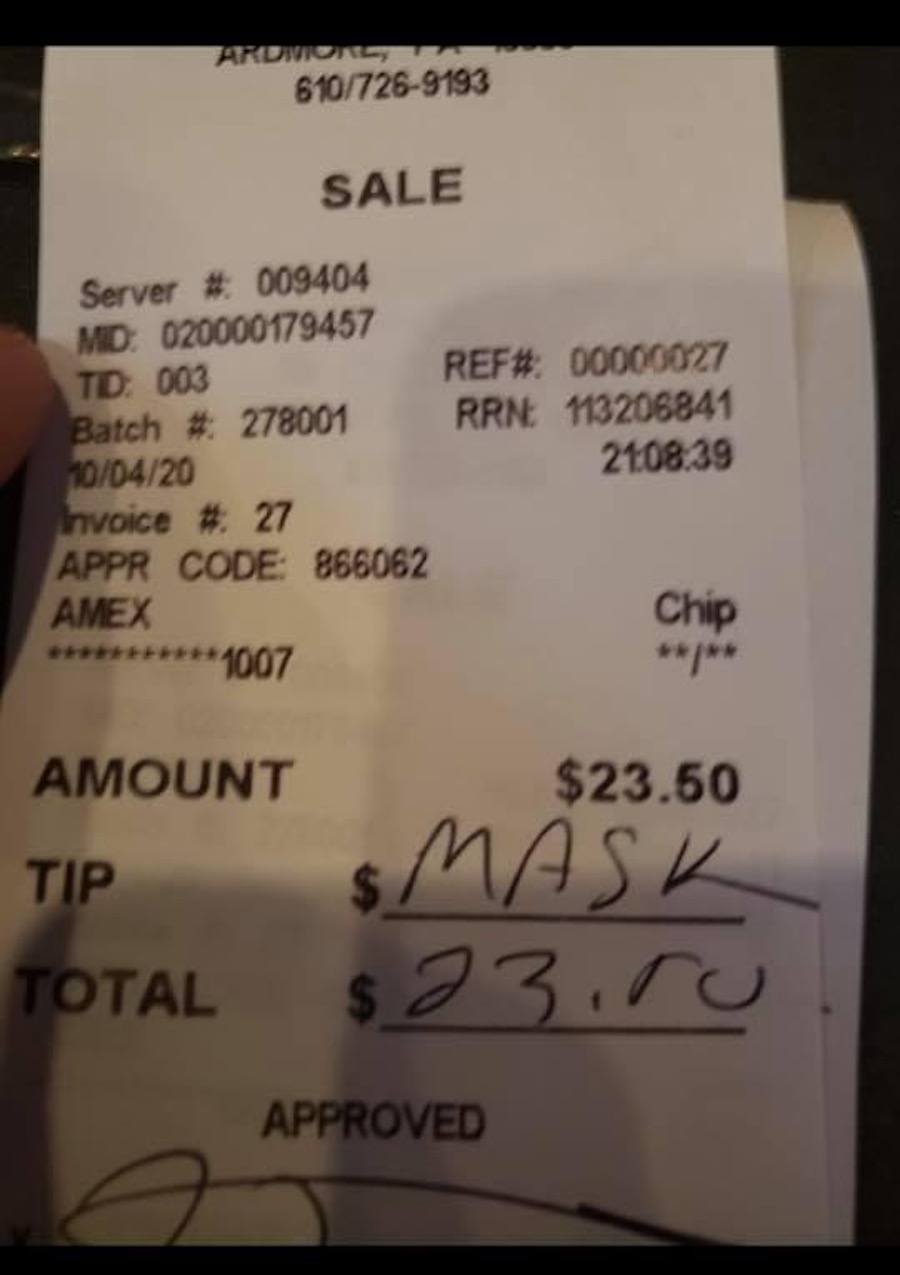 So Kearney took to the John Henry’s Pub Facebook page and posted a photo of the receipt, obscuring the customer’s name. “When your staff politely asks a customer to wear a mask until seated, this is how they are disrespected,” wrote Kearney. “Totally unacceptable.”

Naturally, this being 2020, comments on both sides of the COVID argument began pouring in. I’m not going to dignify some of the ignorance in those comments by repeating them here.

But at the same time, a couple of the customers in the restaurant saw the post pop up on their phones, they talked to other customers, and suddenly Ledwith had other customers tipping her on the man’s behalf.

“One wrote on their slip, ‘Sorry they were mean!'” says Ledwith.

Kearney began getting messages from regulars, asking if they could send Ledwith tips by Venmo. One customer slipped an envelope of cash under the door when the restaurant was closed. And some customers wrote that they would be tipping 40 percent instead of their normal 20 percent on their next visit.

“It’s been overwhelming,” Ledwith says. “It’s really hard working during COVID. It’s hard to tell people what to do. You try to be nice, but sometimes people are rude and disrespectful anyway. I’m just glad that 99 percent of them are awesome. I drive all the way from North Wales to work there. I love the restaurant, and I love my customers.”