Best of Philly: Here’s to the People Who Kept Us Fed Amid COVID-19

They’ve kept our grocery stores stocked, they’ve delivered our takeout, and they’ve helped us hold it all together. 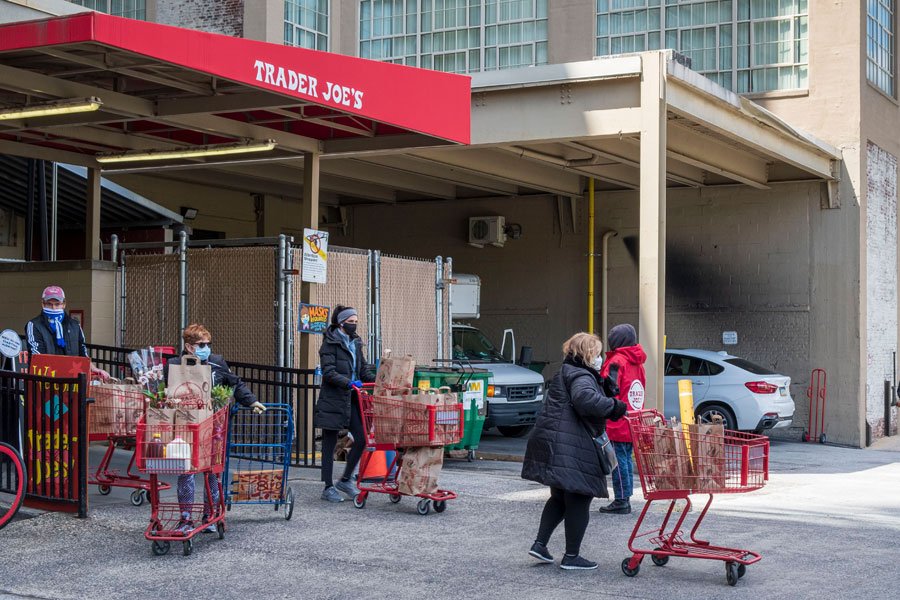 A handful of weeks into the quarantine, when the dark cloud of creeping COVID counts and bad news and boredom and fear had all but swallowed us up, my husband had to make a trip to Trader Joe’s on 22nd Street. He wasn’t happy about it. First, going to the store — any store — made him anxious; second, it was stormy, which meant he’d be standing outside in the rain to get in. He was snippy with me as I reminded him to take his mask and hand sanitizer.

A little more than an hour later, he returned — in a better mood — and told me how as he and a bunch of other miserable shoppers stood in the rain, one cheery TJ’s employee worked the line, cracking jokes and chatting people up through his mask, while the guy sanitizing the carts played music from his portable speaker. A greeter was out there, too, in the rain, dancing. “Dancing!” my husband said, laughing.

It felt absolutely astonishing to me at the time — and it still does — how artfully and also how quickly the people in our grocery stores pivoted into this new reality. Before anyone could even catch a breath — poof! — workers from the bodegas to the behemoths seemed to just grab the bleach, throw on masks, and keep at it, as if their lives weren’t suddenly on the line. We blinked, and those Trader Joe’s dudes were wandering the store like the world’s sunniest social-distance police. Practically overnight, Acme had hired 585 more people in Philly alone; meantime, the folks at the ShopRites and Whole Foods and Sprouts were taping off new foot-traffic routes and engineering new ordering protocols and designating specific shopping hours for the older folks. One 23-year-old cashier I know at my Whole Foods, who usually works part-time, who has a second job, was clocking 10-hour shifts alongside her co-workers. “I think the majority of us did see that we were essential,” she says. “So we came in to work and we did our job.” Not that it wasn’t unnerving at times, particularly in the beginning, as she watched the shelves empty out: “I get my groceries here, too.”

But she and her peers across the city kept the panic-buying from turning into an actual panic by showing up and doing their jobs. And more often than not, they were doing them cheerily.

The same can be said of the delivery people. Who could have anticipated a moment when the ability to order groceries went from luxury to lifeline — literally, in the case of the elderly, the immunocompromised, the frazzled parents who couldn’t figure out how to home-school and work and still get food? How will we explain to future generations the miracle of a masked stranger biking across the city to wordlessly leave a bag on your porch — a rare link to a pre-COVID world? We couldn’t hug our friends or send our kids to school, but by gum, we could still get a baba ganoush from Suraya and cheesesteaks from Lee’s. Praise be.

And speaking of our favorite meals, how about the many restaurant owners who tweaked or reimagined their business models to keep their businesses alive and their people employed? And who, in more instances than we could possibly name here, figured out ways to donate food to medical workers or feed people thrown off course by the virus? At Brewerytown’s Spot Gourmet Burger, for example, owner Josh Kim started giving food away to families in the neighborhood — at first on his own, eventually with help from donations from customers. A few months later, when he noticed neighbors struggling to find a place to buy groceries, he popped up a mini store in the restaurant, selling meat and milk and veggies. At cost.

I’ve been thinking about all these people in all their various roles, as well as their less visible cohort in the food world — you know, the people cooking and working in distribution and stocking warehouses and cleaning the kitchens after a long day of takeout orders. And I’ve been thinking about how, collectively, they’ve kept us from teetering over the edge. From feeling like we’ve lost all the normalcy. From going feral. From crossing the line from “city coping with a crisis” into “city felled by a crisis.” How by showing up and doing their jobs, whatever reasons they had for doing so, they’ve helped us hold it all together. Sure, at times it’s been by the skin of our teeth. But they kept at it, and hey, here we still are, no longer hoarding our meat and toilet paper, getting used to the new rules they’ve learned and enforced, and even still ordering pizza for the kids every few Fridays, just like we always have. Though now we tip a hell of a lot more.