Where to Eat On Your Monday Off, According to Philly Chefs
Subscribe
Follow
I'm a scraper
This search result is here to prevent scraping

Where to Eat On Your Monday Off, According to Philly Chefs

If you're lucky enough to have a long weekend coming up, here are the best spots to go on your extra lazy day, according to the chefs who love them. 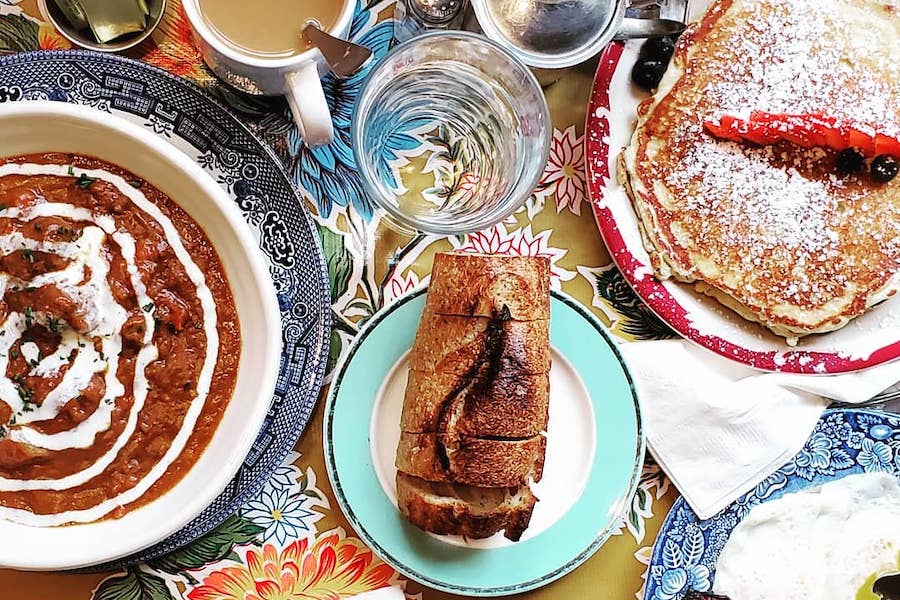 Presidents’ Day is still a full week away, but we’re already planning where to eat on our day off, taking advantage of the extra time to hit spots that are at their best during the off-hours — places that might have long lines on weekends, or feel more peaceful during the week. To help us with a better day off, we reached out to chefs, line cooks and other food folks for their tips on where to eat during a sleepy weekday with no work. Here’s what they told us.

Thousand Layer Bread at Rangoon
“I like to go to Ray’s Cafe for Taiwanese dumplings and an incredible range of siphon coffees then cross the street to Rangoon for an early dinner (obsessed with the thousand layer bread with chicken curry and the spring ginger salad). I’m talking about 5 p.m. early dinner — there’s usually only another table or two filled at that time — and I’ll bring home leftovers for when I’m hungry again at like 8 p.m.” – Kiki Aranita, chef/owner at Poi Dog

Pancakes at Sulimay’s
“Growing up in Jersey (greatest state in the nation) really instilled in me the beauty of the humble diner. The ritual of going to Sulimay’s every Monday brings back the memories and traditional while satisfying my itch to eat breakfast foods at every possible meal. Plus their pancakes are perfect.” – Justine MacNeil, chef/owner of Fiore Fine Foods

2/2/2 at Comfort and Floyd
“I go to Comfort and Floyd at least once a week. You feel like you’re in someone’s home, eating food they would cook for themselves. It’s really nice during the week because you miss the rush. I ate the 2/2/2 the other day which is two pancakes, two eggs and two meats sitting alone and then eventually was the only person in the restaurant and it was so peaceful.” — Sophia Ambrosino, line cook at Barbuzzo

Baked goods at Franny Lou’s Porch
“Franny Lou’s Porch (partially named after Civil Rights’ activist and personal hero Frannie Lou Hamer). I really enjoy their house-made pastries and baked goods. The space is super cute and cozy which is great for getting some reading or writing in during the week. Bower Cafe I personally really dig because it’s a charcuterie cafe in Center City. It is conveniently located for when I have various appointments in the area or just wanna hang, and their toasts are delicious and have a great selection of cured meats.” — Sarah Thompson, charcuterie maker and bagel baker behind @tallpoppy_projects

Two tacos and a consommé at South Philly Barbacoa
“South Philly Barbacoa on Mondays. I get done with my weekly meetings around 2 p.m. and head down there. The lunch crowd has usually died out a bit and I can get two tacos and the consommé in about a minute. Also, Cafe Diem any time midday during the week for their Bún bò Huê. Its a spicy thick noodle soup that’s perfect when its cold. I still like to sneak into Han Dynasty for lunch once in awhile. You can get in and out in 20 min and spend less than $15. We all know by now that the bulk of the menu is pretty damn good.” — Nicholas Elmi, chef/owner of Royal Boucherie

Short rib pho at Cafe Nhan
“We love Cafe Nhan. Nhan and her son Andrew are both chefs, owners and operaters and the food is amazing, the hospitality is homey and feel-good. The best broth for pho. Ask for the short-rib pho which is off menu and to die for. Their banh mi’s are also unreal and it’s super affordable. It’s definitely quieter on Mondays (Monday are our days off since we are closed).”—Amanda and Randy Rucker, owners of River Twice