Port Richmond Pierogi Fest: Too Many People, Too Few Pierogies 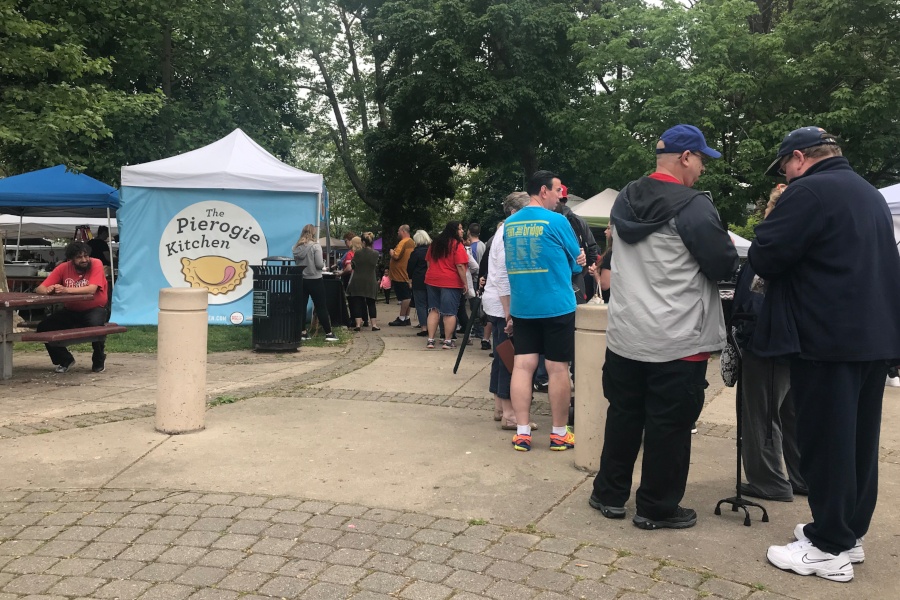 I left Port Richmond’s Pierogi Fest on Saturday empty-bellied, without ever having the chance to consume a single, beautiful, freshly cooked pierogi. And it was a tragedy.

There were way too many people — and way too few pierogis — at the event in Campbell Square Park. Plenty of chefs sautéed the precious Polish dumplings right before my beseeching eyes, but buying any of them would have required waiting in line for at least an hour … or two hours. Or maybe longer.

Thus has the inaugural Pierogi Fest, like “cheesestink” festival and Pickle Fest before it, been (for the most part) deemed a flop.

For many, the pierogi to attendee ratio was grossly inadequate. Pierogi Fest’s Facebook event page has been flooded with hangry folks (many of whom evidently journeyed home to make Mrs. T’s) penning scathing reviews like:

“Perogie festival is a joke when you leave without eating one.”

“It was a nice idea, terribly executed. All I wanted was pierogies and I got none.”

“This was a disaster. $5.00 in tolls, drive around to find parking, wait in line for over an hour and Then find out.. SOLD OUT.. wait in the next line for 20 mins then find out They too just sold out.. VERY POOR EVENT PLANNING.”

What went wrong? Pierogi Fest included only seven food vendors. (Czerw’s, Donna’s Bar, and the Pierogie Kitchen were the most popular.)

Seven vendors might have satisfied a few thousand event attendees, which is what Pierogi Fest organizer Melissa Michalczyk of State Street Events had planned for. But 10,000 people showed up. 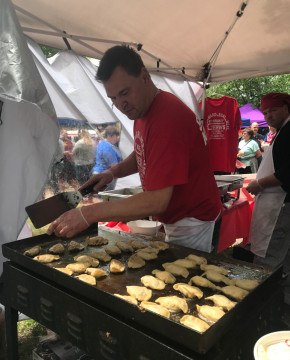 “We thought it was going to be a local, Port Richmond thing,” Michalczyk said. “Ten thousand people was shocking to everybody. People drove from two hours out.”

Personally, I’m not surprised. I’ve never heard anyone utter the words, “Meh, I think I’ll pass on those pierogies.” Because everybody likes pierogies. (We’ve got a guide on where to get them, by the way.) According to comments on the Pierogi Fest event page, some people even ordered as many as three dozen pierogies at once. (Can’t blame them.)

Michalczyk pretty much planned the festival by herself. She said she wasn’t prepared for the crowds, despite the fact that her event page had garnered a lot of interest on Facebook. (More than 3,000 people had clicked “going” by the time of the event, and another 25,000 people had said they were “interested.”)

Still, Michalyczyk said, “you can never know how many people are going to come out to your event.”

“We had bad weather pending leading up to the day of,” she added. “But now we know to overestimate for next year.”

Pierogi Fest will return to Campbell Park next year (hopefully with more pierogies to go around).

Pierogi Fest wasn’t a total bust for the community: It brought plenty of business to local storefronts (I wasn’t the only genius who left in search of pierogies elsewhere in Port Richmond) and raised a few thousand dollars for community stewardship group Friends of Campbell Square. And despite the lack of pierogies, the overall vibe at the festival was pretty positive.

“I did wake up Sunday a little upset, reading all the reviews,” she said. “I absolutely agree with adjusting the ratio for people to pierogies — we didn’t hit that mark. But we’re definitely doing it again next year.”