French Laundry Alum to Open a New Bruncherie in Fishtown

Erik and Angelica Östman will open Over Easy Breakfast Club in the old Ida Mae's space. 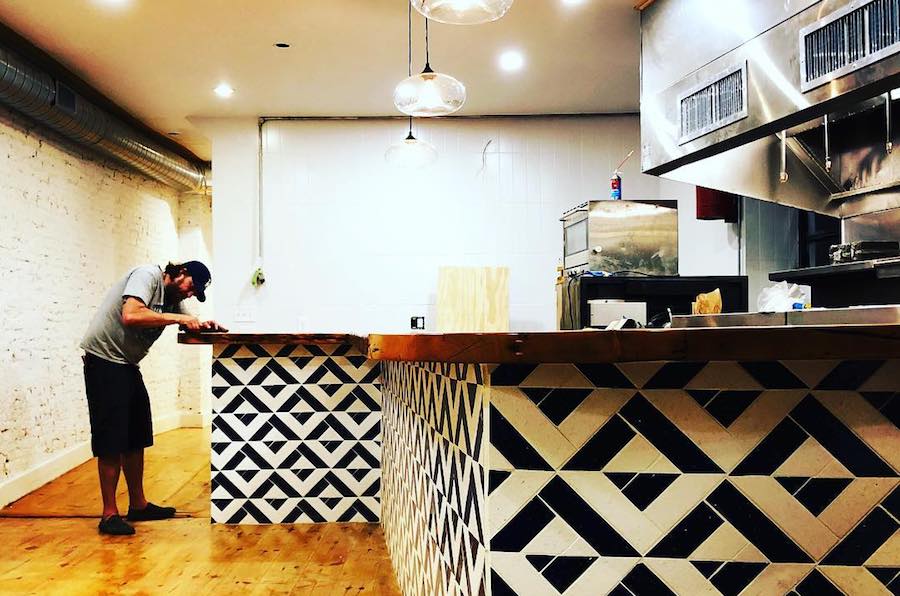 Eric Östman sanding the bar at Over Easy Breakfast Club

Erik and Angelica Östman are shooting to open their new Fishtown bruncherie, Over Easy Breakfast Club, sometime next week at 2302 East Norris Street.

And it’s a fitting replacement for Ida Mae’s, one of the Fishtown restaurant boom’s earliest adopters which closed last year much to the disappointment of its neighbors and friends. For nearly a decade, Ida Mae’s specialized in easy brunches and friendly service — and the Östmans are planning similar vibes (which includes a pretty little dining room by Philly-based designer Kelly Fox) for the corner space at Norris and Tulip Streets.

Its neighbors are in good hands, too, because Erik and Angelica have quite a résumé on them:

Erik, a Johnson & Wales grad, started his culinary career under chef Remi Lauvaund in Santa Barbara, and later, under the late, great Michel Richard at Citronelle. He moved to England and cooked his way through the UK’s best restaurants, at Tom Aikens ‘s flagship, at the Fat Duck and at L’Ortolan — all of them Michelin-starred in some capacity. When he moved back to the U.S, he spent a few years in the French Laundry kitchen, and then stuck around Napa Valley where he met his now-wife in a restaurant they worked at together — him in the back of the house, her in the front. In 2012, they opened their own BBQ spot together in upstate New York called Middleburgers. Six years later, some developer friends of theirs approached them with an opportunity to open a restaurant in Fishtown, and the Ostmans pounced. They closed up shop in New York, moved to Fishtown, and that was that: the Over Easy Breakfast Club was born.

It will be a weekends-only operation — Friday through Sunday, 8 a.m. to 4 p.m. He says that they want to be soft-opened by next week (if not, the week after), taking the month of June to get settled in before their grand opening in early July.

Stay tuned for menus and pictures of the food and space.