Taking a Spin With Ellen Yin 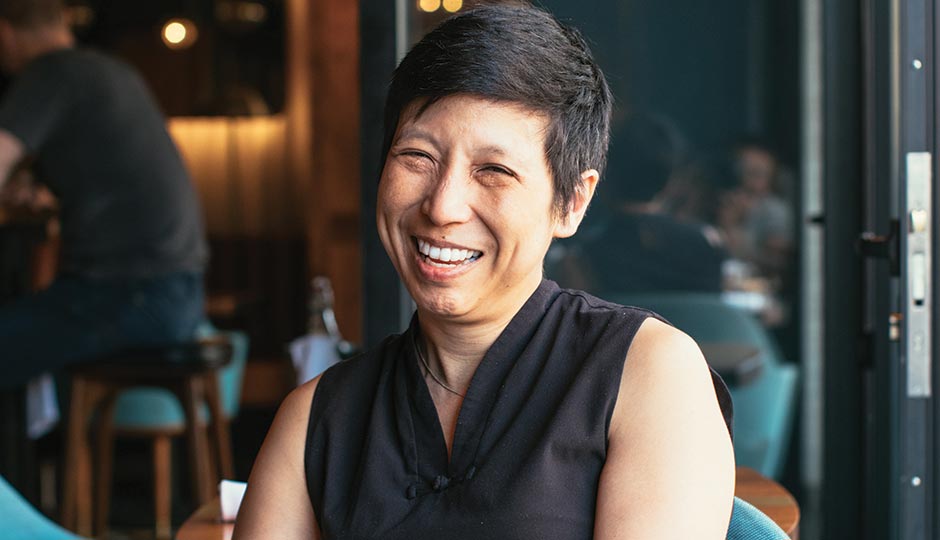 Ellen Yin, out on the town. Photograph by Neal Santos

It might just be that I’m really slow, but Ellen Yin is fast.

We’re taking a brisk bike ride through Old City, her idea and her part of town. She’s tearing it up on a nice new Indego, which she grabbed from the station across Market Street from her pioneering restaurant Fork. I’m several car lengths behind on my old blue Raleigh Record, a bona fide beater whose left pedal screeches with each labored revolution. If Yin is exerting effort to propel herself along Race Street this briskly, it isn’t showing. I’m grateful when we roll to a creaky stop along Columbus Boulevard.

Yin is making like Al Green and taking me to the river. Since 2009, she’s sat on the board of the Delaware River Waterfront Corporation, the nonprofit responsible for destinations like Race Street Pier and Spruce Street Harbor Park. This evening, she’s leading me on an unannounced walkabout of Cherry Street Pier, a cavernous structure that will eventually blossom into a mixed-use space.

For now, the 55,000-square-foot hangar is filled with scrap wood and dry-docked swan boats. A DRWC employee, spotting unfamiliar figures sniffing about, shuts the big garage door behind us, then asks us to state our business. She laughs when she realizes the interloper is Yin: “I’m going to open the door back up now.”

Next, Yin and I saddle up and roll north on Columbus into Fishtown to visit Root Restaurant + Wine Bar. Owner Greg Root seats us at an open-air table, which is when people start noticing her.

It seems like every fifth Frankford Avenue pedestrian wants to pay respects. They wave and/or smile and/or offer a prayer-hands-emoji gesture. This started earlier in the evening, in Old City, when three fellow restaurateurs spotted her rounding a corner and greeted her in near-unison.

This is the type of Philly street cachet earned over two hard-fought decades in the people-pleasing business. Yin opened Fork in October 1997, well before cheffy-but-accessible bistros of its ilk became the city’s standard. The New Jersey native was in her early 30s then, not far removed from a Wharton MBA and a series of successful but unfulfilling jobs in the business world.

Fork was in the works way before all that — she’d wanted to own her own place since high school, a goal that wasn’t the easiest sell to her mother and father, immigrants from China. Fork’s steady success, however, “confirmed normal life is not for me,” she proclaims proudly.

“What time do you usually eat lunch?” Yin asks between nibbles of Marcona almonds and sips of a chilly white from the Dalmatian Coast. “This is lunch for me.” It’s past 6:30 p.m. Nowadays, Yin Amtraks regularly between home and High Street on Hudson, a New York City offshoot of the all-day-dining spot she introduced next to Fork in 2013. Add in the partnership that has her running A.Kitchen and A.Bar in Rittenhouse, and her dance card is full — a lifestyle on which she thrives.

The public’s tastes have expanded over the years: Compare High Street’s smoked duck confit Cubano with fermented mustard to the turkey baguette with sun-dried tomatoes Yin served as a Penn undergrad working at University City’s La Terrasse. Fork has stuck around for 20 years by cooking in the moment, hosting a diverse succession of chefs who each brought a different definition of “New American.”

Amid all this change, Yin’s dedication to hospitality has remained steadfast. “I was a pre-millennial,” she says, laughing at the buzzword. “I had to have a mission. If I don’t feel strongly, then I don’t think I’m going to be able to do it.”

Published as “Taking a Spin With Ellen Yin” in the October 2017 issue of Philadelphia magazine.