It Would Cost Your Corner Bar $2,000 to Show the Mayweather-McGregor Fight

Plus: Here are all the Philly bars showing the royal rumble. Well, legally anyway. 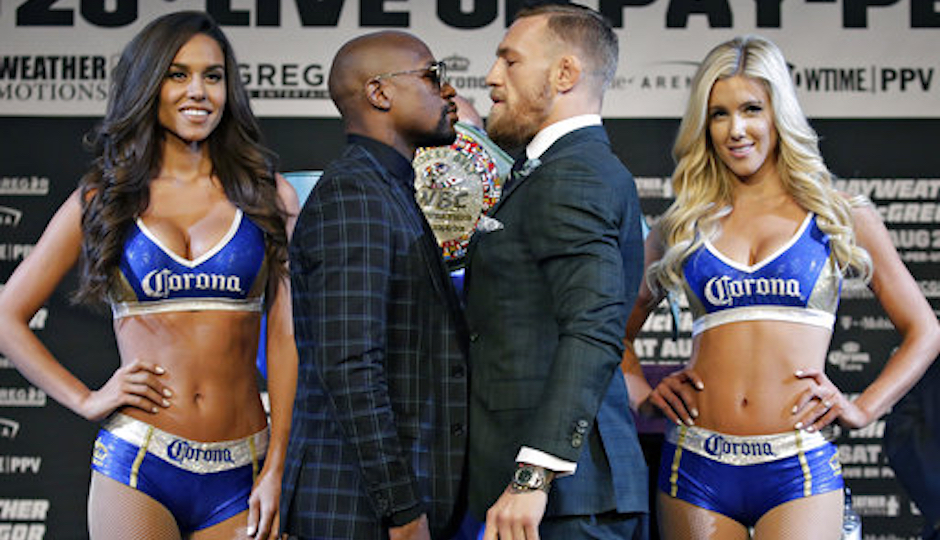 Scroll to the bottom of this story for a full list of the bars showing the Mayweather-McGregor fight in the Philadelphia area.

I love a good fight, but usually when there’s a “big fight” on pay-per-view, it can be hard to find a decent place to watch it. The strip clubs are the only guarantees. But this weekend for the Mayweather-McGregor fight, the rules have changed completely.

I don’t remember the last time that people were this excited for a boxing event. It’s sort of like your pals who could care less about the Phillies until they are in the World Series, and all of a sudden, they all want to watch the game.

I’ve got friends who’ve never seen a boxing match in their lives calling me to ask me where to go to see the Mayweather-McGregor fight in Philadelphia. If you’re watching it at a bar and hear someone ask, “What’s a TKO?”, don’t be surprised.

Philly bars have definitely caught up with the hype. One month ago, I could barely find anyone showing the Mayweather-McGregor fight in Philly. Now, you have a wide range of options, with more than 130 spots in the Philadelphia and South Jersey area participating.

“This is our biggest commercial PPV ever in terms of locations,” says Tim McManus of Joe Hand Promotions, the Feasterville-based boxing and UFC promotions company. “This is a monster. Most of our staff are working twelve-hour days. We’re averaging more than 3,000 calls per day over the last week. We got close to 1,000 email inquiries yesterday. We’re basically sleeping here at this point, but we’ve all be thrilled to be a part of history.”

For the bars, being a part of history isn’t a cheap endeavor, and so it’s not a cheap night out for you.

It would cost your average neighborhood spot about $2,000 to show the fight.

If the bar is ordering through Comcast, the cable giant gets a $125 PPV fee and then the promotions companies get $30 per person based on the legal occupancy of your bar — not based on how many people actually show up but how many people legally could. So if the joint down the street holds 60 people, they have to shell out nearly $2,000 to show the fight. Some bigger venues, like XFinity Live, are able to negotiate special deals, but those agreements are all confidential.

“It’s expensive,” admits Pete Ciarrocchi, owner of Chickie’s & Pete’s. All of the Chickie’s & Pete’s in the area are showing the fight, with a variety of packages available. At the South Philly location, you’ll pay $40 for a ticket in the bar area (barstool not guaranteed), and that includes a $20 voucher for food or drink.

At Fado in Center City, they’re charging $25 in advance, which just gets you in the door… assuming you arrive before 10 p.m. Otherwise, they might not even let you in. It’s going to be crazy.

As for me, I’m either going to watch the fight at Chickie’s & Pete’s… or at a Delco bar I know of that’s going to be showing it illegally.

“I’m going to pretend I didn’t hear you say that,” says McManus, who says he’s hoping to get into the bar at the private Veterans Boxers Association in Port Richmond, which sounds like pretty much the coolest possible place you could go to watch the fight.

As for bars showing the Mayweather-McGregor fight illegally, don’t think this is without the possibility of consequence. Joe Hand Promotions just filed a federal lawsuit against a bar in Oregon that allegedly showed a bunch of UFC fights illegally. The fine for doing so? Up to $110,000 each time you do it.

Below, all of the bars signed up to show the Mayweather-McGregor fight in Philadelphia and the surrounding area as of 10 a.m. on Friday. It’s organized by town name, so you can easily check and see who is showing it near you. (Forgive the typos — this data comes directly from Joe Hand.) To stay up to date with the latest additions, visit the Joe Hand Promotions website.

Where to Watch the Mayweather McGregor Fight In the Philly Area