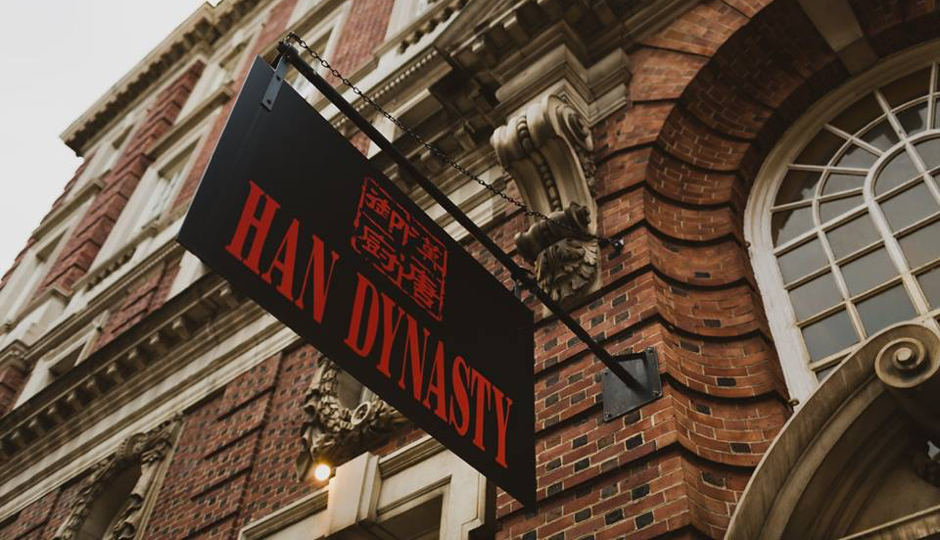 Han Dynasty’s Han Chiang will be the first to tell you he doesn’t shy away from a verbal scrap, whether it’s with a guest in his restaurant complaining about the heat of his dishes or a group of wedding celebrants allegedly throwing racist remarks his way outside his place.

It was the latter, Chiang says, that landed him in the hospital with a fractured ankle early on Friday morning.

A group of at least four men and a couple of women — accounts vary — who were celebrating a wedding stopped by an Old City brewpub next to Han Dynasty late Thursday night and, according to the brewpub’s GM, ordered one round of beer. Some didn’t finish their drinks, but when others tried to order a second round, the bar staff decided to cut them off and asked them to leave — even offering to put them in cabs. They refused, and left “disgruntled,” says the GM.

Next door, Chiang was outside with members of his crew, who were taking a smoke break after the end of service. As the wedding party passed by, Chiang says, one of the men uttered an audible racial slur. Chiang responded by asking him to repeat what he had said “to my face.” Another member of the group went to push between Chiang and the man, in the process dropping a skateboard he was carrying, which then rolled into Chiang’s foot. Chiang says he kicked the board away, which set in motion “a whole lot of pushing and wrestling,” but no punches were thrown.

Other members of the Han Dynasty staff then ran outside to break things up, leading to a scene that Mark Allan, Chiang’s business partner, describes as a “human centipede of headlocks.” “My manager Dan was in a chokehold,” Chiang says, “and this woman started attacking him in the chokehold, so I tried pulling her off of him. Another guy accused me of hitting her — I did not — and pushed me from behind,” which caused him to fall. He says he does not know who pushed him.

After Chiang hit the ground, the fight broke up. Allan took Chiang to the emergency room at Pennsylvania Hospital, where it was discovered that he had a fractured fibula.

Sometime in the next couple of hours, as Chiang was being treated, Ian Carroll, a Garces Group employee who works at Spruce Street Harbor Park, took to Facebook to write the following review of Han Dynasty: 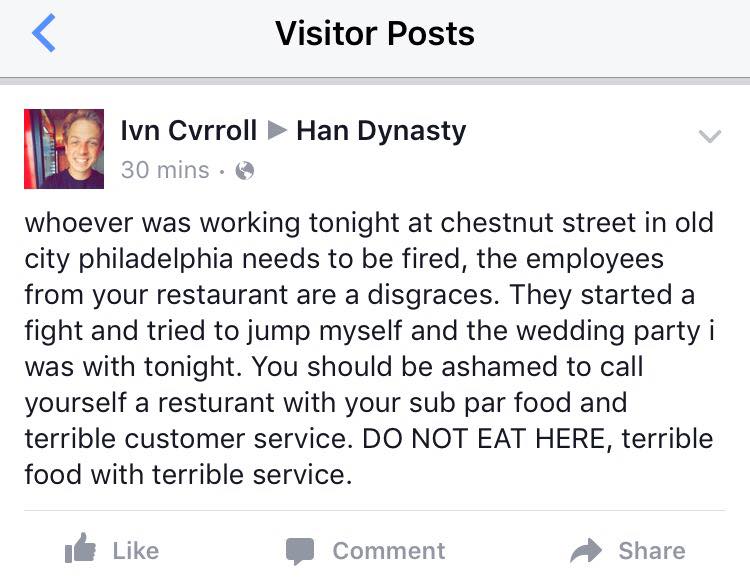 Mark Allan left the following response on the Han Dynasty Facebook page (Carroll pulled down his review soon after): 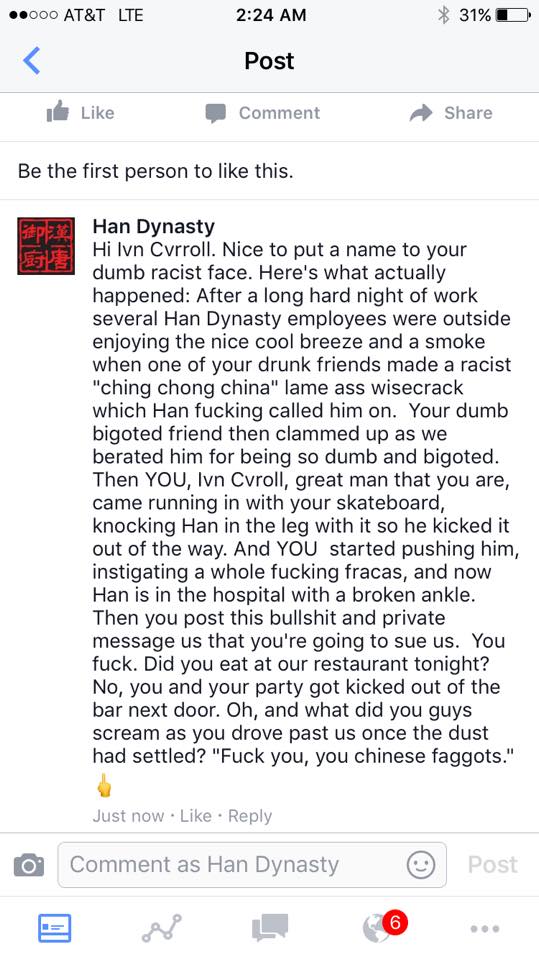 Chiang shared with Foobooz screenshots of Facebook messages it appears that Carroll — who took this week off for his sister’s wedding, a co-worker at Spruce Street Harbor Park confirms — sent right after Allan’s response was published:

Hahaha good try man no one drove by and no one said a word to you. You wanna act like that and idiot [sic] and racism is your only scapegoat. I hope you lose what little of a life you have left[.]

Another message reads: “Tomorrow is gonna be a great day for myself and mother who you assaulted and [a] terrible day for you[.]”

As of late afternoon Friday, Chiang says, he has not not been contacted by police or anyone’s lawyer. Carroll did not respond to multiple requests for comment.

Chiang says this is the second time this year a racial incident has happened outside his restaurant. The first time, a group of seven guys walking by asked Chiang if he had any General Tso’s chicken: “If they asked me inside the restaurant, fine. But I was standing outside minding my own business. I said, ‘Fuck you, you racist piece of shit!’ and one of them sucker-punched me.” That time, Chiang says, the cops got involved: “They pulled them out of a club and asked which one hit me, but I was sucked-punched so I didn’t know.” He chose to not press charges.

The Garces Group, by the way, released this statement:

Garces does not tolerate discrimination or bigotry within our organization.  This type of behavior is unacceptable and does not represent the views of our company.

Chaing and Allan are about to open their ninth location (their third in New York City) in Brooklyn this summer. “I don’t have time to worry about this,” Allan says. “We have a dynasty to run.”