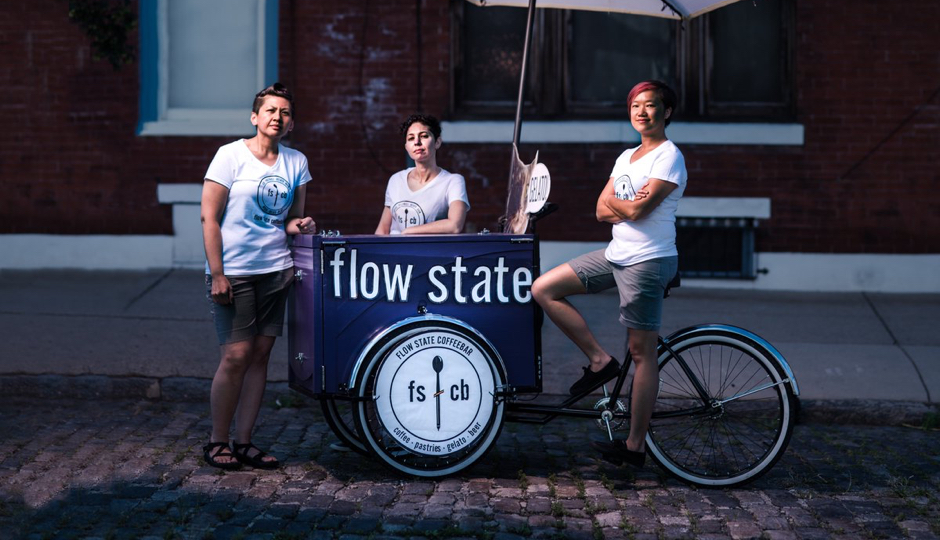 Melanie Diamond-Manlusoc is new to Philly. She’s originally from Chicago, and there, she was sort of a big deal in the restaurant community, making pastries, desserts and gelato for acclaimed restaurants like Morimoto’s Japonais, Henri, and the Michelin-starred Blackbird before landing at Spiaggia. Spiaggia made the most sense — a Michelin-starred modern Italian restaurant is more like a playground for a crazed gelato nut like Manlusoc.

And Philadelphia — specifically Kensington — is where Manlusoc, her wife Liz Diamond-Manlusoc, and their friend Maggie Lee settled to open their new coffee bar, Flow State, later this year.

Manlusoc started her professional career as a middle school band director. At one point, she was managing ten band programs in schools all over the Chicago-area, but it was one class trip to Italy that sparked her loved affair with gelato.

She started making it at home and noticed she had a real knack for it. Others noticed, too. In an interview with Chicago magazine, she mentioned hosting gelato-eating parties, then pop-up gelato dinners, and then, eventually, friends and family started placing orders. Her music career eventually took a back seat to her newly found kitchen talents, and, in time, she gave it up to run away to culinary school. There, she honed her craft enough to land her in those Michelin-starred kitchens.

Lee, who will run Flow State’s front-of-house with Liz, is a Philly-native. She moved back home (from Chicago) a few years ago to be closer to her family. When Melanie and Liz came to visit her, they fell in love with the food scene and decided to move here to open their business together.

“Flow state” is the term for “when you’re in the zone,” says Manlusoc. “And I want this place to be a space for people to tap into their flow state.” So the first floor  of the building at 2413 Frankford Avenue will be a regular coffee shop, and down in the basement, an open space with plenty of outlets and tables for those who work out of cafes. During the day, the food menu will be all pastries, light bites, gelato, and coffee by Lancaster-based Square One.

At night, things will go a little differently. Plans for skee-ball machines are in the works, and Flow State will double up as a beer bar with a handful of locals on draft, plus a small menu of “fried things” to drink them with.

Is Flow State just a suped-up neighborhood coffee shop? No, there’s more to it than that. While this new venture might seem a bit schizophrenic (coffee bar, gelateria, work space, beer bar, skee-ball alley) at first, Manlusoc says she wants it to be whatever the neighbors want it to be — to some it’ll be a cafe, others will come for the pastries, and (she hopes) the masses will come for her gelato. Whatever Flow State is, it’s 100% indicative of where Kensington’s at in 2017.

Before they open, find the Flow State team popping up all over the neighborhood. On deck: May 20th’s Kinetic Sculpture Derby and June 10th’s Taste of Kensington.