Han Dynasty owner Han Chiang is trying to bring some good to this world through beer, Chinese meatballs, and martial arts movies. 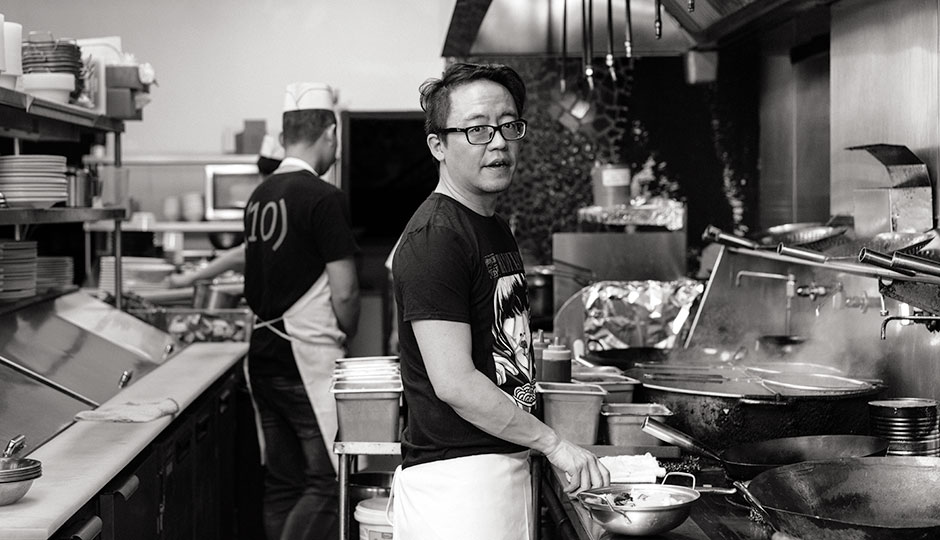 Han Chiang on the line. Photograph by Gene Smirnov.

Everyone who walked through the door on the night of the first-ever meeting of Han Chiang’s Kung Fu Cooking Club was handed a release. It was a single page, full of somewhat slapdash legalese, but the best part was toward the bottom:

“I acknowledge that Han says crazy shit. I will not be offended by what Han says. I agree not to sue Han for whatever crazy shit he says. This is America, you can say what you want. It’s the first fucking amendment!!”

Everyone signed. Gleefully. Those at the bar, who were knocking back pregame beers while last-minute preparations for the class were made, were speculating among themselves that if Han was making them sign waivers, this was going to be awesome. Had to be. Because Han is the man — a crazy-ass loudmouth with a bulldog rep. He’s like a hard-partying insult comic let loose nightly in a room full of paying customers. His customers. He owns eight restaurants here and in New York City, does some of the best Szechuan food around, and each location somehow channels his spirit. Han threw together this class on Facebook in five minutes because he wanted to bring people together to have a little fun. That’s also why he made it free.

In the private room in his Old City restaurant, Han and his team have hastily assembled a demonstration station with butane burners and stockpots. “Recently, I’ve just seen so many pathetic, sad-ass motherfuckers out there,” says Han from the front of the room. And the crowd (about 30 people, mostly young) cheers.

“One thing I can’t stand, it’s negativity,” Han says. “Let’s make a difference. Let’s do some charity shit. I don’t know.” And the crowd cheers.

Han doesn’t know how this is going to work, but then, neither does anyone else. Beers and more beers are passed around. Han is making lion’s head meatballs. His grandmom’s recipe. He works by eye, by smell, by taste. Han’s a cook, a kitchen guy, so he has no idea of measures. The crowd is … suspicious of this casualness, but Han waves it off, bullshits his way through all questions. He explains that lion’s head meatballs are supposed to be huge. “Compared to Italian meatballs? Those are for pussies,” he says. And the crowd cheers again.

As with every great party, every great funeral, every great trip to the DMV, the drunker everyone gets, the better all of this seems. These people came here for Han. To be in this room. To take a break from sadness and boredom and politics and bullshit, and Han is here for the same reasons.

Somewhere, someone starts the movie Enter the Dragon, and Han ducks out for a cigarette. I follow. He tells me he thinks it’s going well so far. Except he’s worried he might light the place on fire.

But he’s smiling. Jittery with energy. He has a plan for the end of the night. He’s got these envelopes to hand out — homework assignments. The messages inside say things like Volunteer or Donate blood or Cook for someone whose ass you want to kick. “Or, like, if you eat at any Chinese restaurant other than Han Dynasty, you’re a fucking traitor,” Han says. But mostly, they say to do some good. To take this night — the energy of it, whatever good feelings you walk away with — and pay it forward.

Back inside, the lion’s head meatballs are cooking. In the smoky haze and heat, Han paces in the back of the room, watching. Already planning how to make the second meeting better.

Published as “The Hang: The First Rule of Fight Club …” in the April 2017 issue ofPhiladelphiamagazine.