What happens when a restaurant owner, two local coffee roasters and the best young chef in town get together to serve the neighbors breakfast sandwiches and octopus? 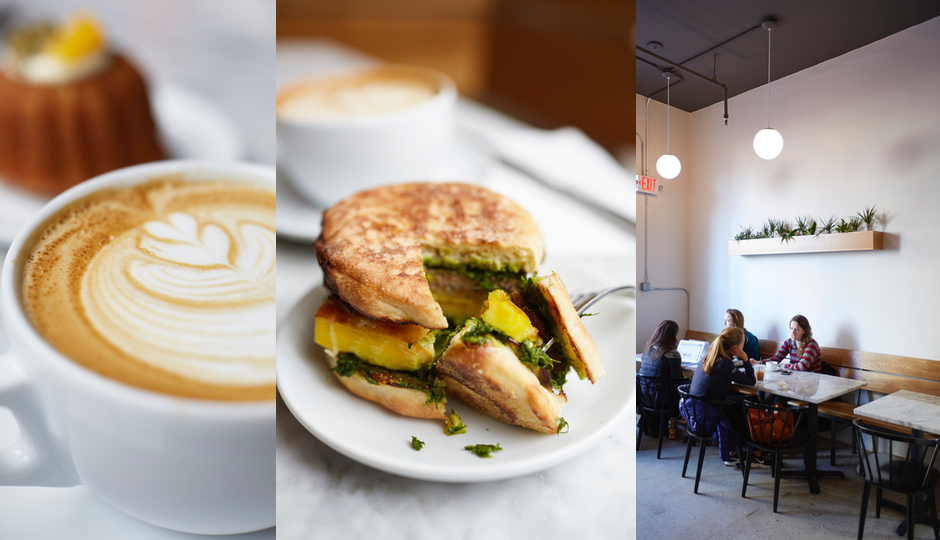 I get this a lot. Obviously. Life that I live, things that I do, people I know, it’s the most common question I hear. Or second most, maybe, behind You want another drink? or What’s that stain on your shirt?

“So, how was dinner?” From friends, colleagues, editors, 10,000 servers, my mom. Always the same. And seeing as how it’s my actual job to answer precisely that question all the time, you’d think it would be easy. That I’d always have a fast and ready answer.

Order This: Everything. Literally, everything. Absolutely the ravioli special if it’s offered, the spaghetti a la vongole, the breakfast sandwich and the octopus. But really, just everything.

What I have instead are sentence fragments, uncomfortable ellipses, a dozen different grunts, a dozen ways to say, “Well … ” What I have is waffling. Non sequiturs. A habit of changing the subject and walking out of the room (wishing, always, that I was a ninja or Batman and could do it in style—with the poof of a smoke bomb or suddenness of a grappling hook). Because I never know how dinner was. Or certainly can’t explain it in anything less than a rambling, foul-mouthed monologue that will go on longer than is comfortable for either of us. How was dinner? I once wrote a book that was more or less an attempt to answer that question for someone. It was 400 pages long.

But every now and then, there’s an exception. A restaurant where the answer is just … simple. When I got back from my first dinner at Res Ipsa and a friend asked, “So, how was dinner?” I said, “It was great.”

“Well, shit. Then what are you going to say?”

I took a minute to think about that and then admitted I wasn’t really sure.

So let’s just do this, then: Let’s say, from the start, that this place—Res Ipsa, open for a few months now on that stretch of Walnut Street so newly hot that it doesn’t yet know where to hide all its garbage—is great. Is so thoroughly and completely Philly 2017 that it couldn’t be anything but an all-day cafe in a small, unbecoming space with what amounts to a pop-up BYO Sicilian restaurant opening inside it at 5:30 p.m. on Wednesdays through Sundays.

Let’s say that the combined work of three serious Fishtown operators—Mark Corpus and Mark Capriotti from ReAnimator Coffee and Tyler Akin of Stock—lays an excellent foundation for a place that’s part coffee shop (during the morning, certainly, and mornings around here can last well into the afternoon), part quick-lunch cafe, and all kinds of casual and come-as-you-are. But the smartest move those three guys made? Hiring chef Michael Vincent Ferreri to run the kitchen. Because Ferreri is, right at this moment, probably the best young chef in town.

Now go back and read that again, because I mean it. Best young chef in the entire city. Seriously. He comes with a résumé that could have gotten him a job on any line in Philly. He worked at Zeppoli under Joey Baldino. Some of the best, oddest, most counterintuitive dishes on the menu at George Sabatino’s Aldine came from his hands. While at Zahav, he spent years working the chef’s counter—the truest, most pure expression of what Michael Solomonov was trying to do there. He could have walked into any kitchen in town, just about, competently handled it, and spun down plates that in a couple years we’d all recognize as Ferreri-ish. Or Ferreri-esque. Or something.

But he didn’t. Instead, he signed on with this ragtag all-day operation on Walnut Street, with its boxy frame and zero decor, terrible street frontage and strange name (from the Latin Res ipsa loquitor—“The thing speaks for itself”). He brought in a sous-chef lifted from the line at Zahav (Adam Sosnowik) and decided, You know what these people really need? Octopus tentacles.

Not for breakfast, mind you. No, breakfast is hand pies, cinnamon rolls with rosemary and fleur de sel, Italian breakfast plates of house-made sausage and beans, and an overcomplicated but technically astounding breakfast sandwich that takes the current Philadelphia obsession with egg sandwiches and elevates it, turning it into a square of frittata stiff enough to hold its form yet still soft and loose on the inside, like perfect scrambled eggs, dressed with herbed long hot spread and fresh asiago cheese, on a scratch-made English muffin.

It goes on all day, breakfast. Even when lunch is being served, the kitchen is still pumping out breakfast sandwiches and toast and potatoes with salsa verde and chili oil. But now they compete for space, the spotlight and digestive real estate with simple/not-simple lunch sandwiches (spicy chicken salad that must take a dozen steps to create, with pickled greens and salty ricotta salata); a bowl of tomato soup drizzled with basil oil, which comes with a tiny little grilled cheese sandwich all its own; a composed Caesar salad made from bitter escarole, lots of black pepper, and white Spanish anchovies, because what’s a Caesar salad, really, but the one place in the world where the humble anchovy is the star? 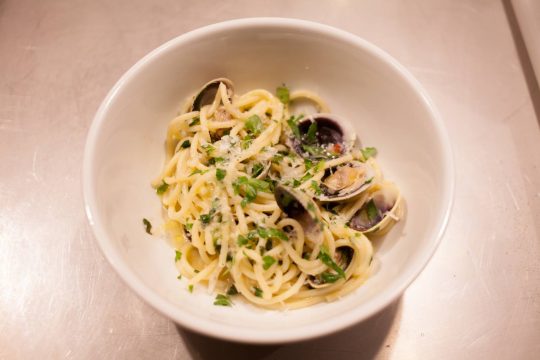 But then, at dinner, the octopus. One single tentacle, meaty and thick and curled, charred on the grill like it was cooked by cavemen, only set, here, over a grilled salad of escarole leaves and chopped green olives that hits you right in the intersection between plain rusticity and absolute brilliance. It is so good. So purely there (not deconstructed, not fussed over) and, at the same time, so considered, with its two applications of squid ink agrodolce (lightly as a dressing for the salad, then heavily in big dots as sauce for the octopus) and beautiful, spare design.

If that had been the only great plate from Ferreri and his crew, it would have been enough. Could’ve talked about it for days. But that wasn’t the only great plate. Not by a long shot. The slightly sticky, garlicky lemon and butter sauce in which the tiny clams and pasta of the kitchen’s spaghetti a la vongole swam is why bread was invented. If bread weren’t a thing—if no one had ever thought of bread before Ferreri cooked this dish—somebody would have had to come up with it just for this.

In a small plate of gnocchi sardo, the kitchen makes eggplant the centerpiece. Which should be impossible, because almost always, eggplant in restaurants is awful. It tastes the way a sponge would if sponges were sentient and furious at us for eating them and took their revenge by tasting like dirty water and spite. But here, the chunks of them mixed into the gently spicy tomato sauce are soft and pliant (not mushy and gross) and serve only to add texture and thickness and a vague vegetable solidity to a sauce that without them would have been too sweet or too watery or too smooth to be anything special at all. The eggplant was, in this case, instrumental. And how often do you hear that?

Is that enough? No. It isn’t. There was a raviolo on special—a big, floppy thing the size of the bottom of the bowl in which it was served. It came in a brown butter sauce with nothing punctuating it but salt and a couple fried sage leaves. But when you cut the thing open—the raviolo itself, filled with egg and cheese—it bled yolk into the sauce, thickening and emulsifying it. Making a secondary sauce out of the primary sauce, all eggy and warm, nutty, salty and delicious. The cheese, and the actual skin of the ravioli? Just bonuses. So good on their own, but really just a delivery vehicle for this one little miracle of food and science. It was, without a doubt, the best single plate I’ve eaten this year. If I could, I’d go back and eat it every night. Watching the yolk bleed into the butter, scraping at it with my fork until the two mix, sopping it up with bread—it would never grow old.

So often, these reviews I write are where I come to work out my complicated feelings for restaurants that thrill and disappoint me. I come conflicted—at war with myself, friends, chefs, editors, over how I feel, exactly, about this egg or that piece of bread; battling to come to a firm conclusion on the worth and value of tacos, fried chicken, pie.

Which is as it should be. Because restaurants matter. Because dining (not eating) is always a fascinating ballet, a nonstop comedy of manners, class and social transaction, and eating (not dining) is one of the only things left in this polarized and fucked-up world that we all have in common. Everyone eats, and we should all do it as well as we can even as, around us, everything else goes all to hell.

So, yeah, complicated. And these things—these reviews, these criticisms—are my pulp therapy. Most of the time, writing them is difficult. Sometimes it’s the easiest thing in the world.

Should you go to Res Ipsa? Yes. Now. Tonight. This morning. Whenever. It’s remarkable in its honest rusticity at dinner, its better-than-necessary breakfasts, its consistent excellence, its no-bullshit vibe. I’m giving it three stars rather than four because, of all the many things Res Ipsa is, it is most importantly ours—Philly’s—in a very personal way. So pop-up, with its casual table service, small menu and tea lights. So BYO. So weird and small and scrappy and comforting. It doesn’t need (and likely couldn’t handle) a flood of tourists or culinary day-trippers, so for now, let’s keep it under our hats.

But know that here, in this tiny kitchen and small dining room, is an experience as good as you’ll find anywhere—a meal (or two, or three) that could easily number among your best. And, most important, a young chef who might be Philly’s next big thing.