Stop Killing Yourself With Those Terrible Street Cart Gyros

This new gyro will save your soul. 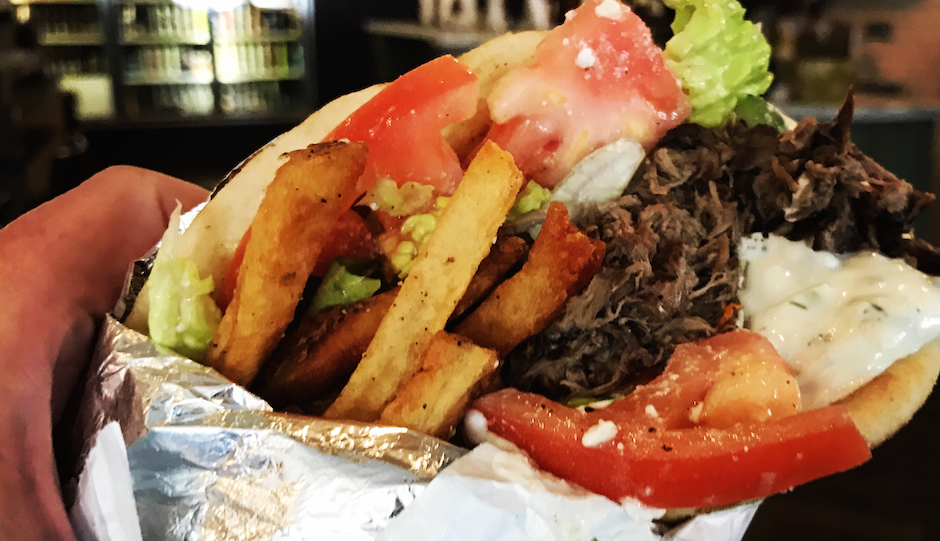 I don’t remember when it was that I suggested to Hawthorne’s owner Chris Fetfatzes that he embrace his Greek heritage by adding a gyro to the menu. But I do remember that right after I said it, I totally felt like Jerry Seinfeld telling Babu to open a Pakistani joint, and we all know how that turned out.

Anyway, it just so happens that I wasn’t the only big jerk presumptuous enough to tell Fetfatzes add a gyro to his lunch menu, and he’s finally given in.

Now, this isn’t the nasty little “gyro” you get for $3 from all those halal trucks that have suddenly and mysteriously overtaken the street corners in Center City. This is a sandwich made with love.

It’s also not your typical gyro, which is usually made with lamb sliced thinly off of a vertical rotisserie. Hell, we’re not even sure that this would technically be considered a gyro by gyro purists, who undoubtedly are out there, but who cares?

Hawthorne’s chef Ron Silverberg braises lamb shoulder in pomegranate juice and red wine before pulling and then shredding the meat. But after that, the process is perfectly gyro-like.

The tender lamb is stuffed — and we do mean stuffed — into a warm, fresh pita along with lettuce, tomato, red onion, and house-made Tzatziki. There’s also the unexpected addition of French fries that are wedged in there, too. What is this, Primanti Bros.?

“That’s how they do them on Crete,” Fetfatzes explains. “And that’s how I wanted to do the gyro here.”

We tried the $14 Hawthorne’s gyro last week, served with a sizable Greek salad. And if you’ve been living on a steady diet of that cheap cart crap doused in the questionable white sauce, eating the Hawthorne’s gyro will be analogous to slipping behind the wheel of a brand new Mercedes S-Class after a life of driving only jalopies.

You can never go back.