Eat This Now: Corndogs and Cheese Curds From Fox & Son 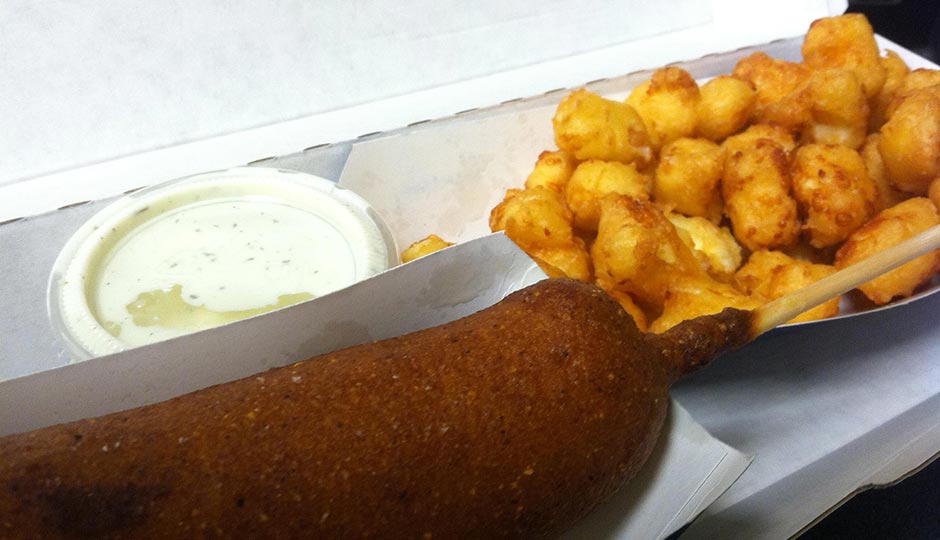 A couple months back, we told you all about the best idea that the Reading Terminal Market has had in years: The opening of a fancy corndog stand right in the middle of the action. It is called Fox & Son Fancy Corndogs and is the brainchild of two market veterans: Rebecca Foxman and Ezekial Ferguson who, between them, have done time with Valley Shepherd Creamery and Meltkraft at the market, plus Ferguson’s 13 years at DiBruno Bros. as a “cheese and bacon connoisseur.”

Fox & Son has been up and running for a few weeks now, doing a slow run-up to their grand opening with a limited menu. Tomorrow, they’re having their official grand opening with a ceremonial cutting of a giant wiener (in lieu of a ribbon), but I dropped by yesterday to check out their most classic and satisfying combo: a corndog and a basket of fried cheese curds.

Should you go eat this now? Absolutely. I mean, it’s corndogs that don’t require a trip to the county fair. Plus funnel cake, loaded baked potatoes, fried cheese, poutine and essentially everything else in the world that makes a boy like me happy. So unless you’re one of those people who exists purely on kale salads and cold-pressed juice, or can’t imagine a meal that doesn’t involve tweezered garnishes, Fox & Son should immediately go into your rotation–right in between Tom’s Dim Sum and Stargazy.

Early on a Monday afternoon, Fox & Son was already pulling a line. Not as long as the one at DiNic’s, granted, but a respectable one for a place that was still in its soft-opening phase. The crew was working hard while owners Foxman and Ferguson fussed with the machinery and systems and the menu, which still had a few items blacked out (notably the corned beef hash corndog, which I am seriously curious about).

But still, they were operating–offering everything a growing boy needs to get through a long day at the office: corndogs and fried cheese curds.

The basic, traditional corndog is a carnival classic: gluten-free batter, deep-fried and jacketing a pork-and-beef dog on a stick. They lay the batter on thick. It is slightly less sweet than the straight junk food version, but admirably crisp on the outside, pillowy in the middle, and encasing a good, juicy dog. This is the base model–the simplest and most basic. But the cooks working the trench at Fox & Son get to show off their skills a bit more with the more involved corndogs: cheddar-jalapeno dressed in a cheese sauce, chorizo in a sweet potato batter with lime crema, that sort of thing.

And those fried cheese curds? Awesome. A little paper basket of joy–lightly-battered, fried golden brown, still stiff enough to squeak between the teeth, and served with a thin buttermilk ranch sauce which is both unnecessary and addictive at the same time. I hoovered up an entire order in about five minutes. And when I was done, I wanted another.

When I eventually die, fried cheese is going to be listed as the cause of death, guaranteed. They’ll cut me open and I’ll have a heart full of fryer oil. But you know what else I’ll have? A smile on my face.

The official grand opening is tomorrow at 10:30am. There are no big festivities planned (other than the cutting of the giant frankfurter), but it does serve as an excellent excuse to head down to the market to check them out.