About Last Night: The One Where No One Saw Strange Brew, But At Least We Had Tiny Sombreros Thinking caps that guests wore for trivia rounds, and Jason wore for fun.

It is imperative that you do the following tonight: crack open a beer, introduce your backside to the couch, and put on Strange Brew. Do not pass go.

Now that that’s out of the way, let’s talk about last Wednesday. The event was Open Stove XXXIX, themed (you could say loosely) around Beer Week, steak houses, and a little bit of Fireball. And teeny, tiny sombreros.

In what is turning into a recurrent nightmare for Jason during the trivia portion of our Open Stove events, no one had seen Strange Brew (recall the Barfly incident). Prepared for disappointment this time, however, we came armed with thinking caps and more than enough alcohol to ensure that even those who hadn’t seen the movie would, by the end of the night, almost believe they had.

Click through for all the laughter, tears and tiny hats. Yeah, we have pictures. Lots and lots of pictures. Our contenders for the evening: Michael Vincent Ferrari of Aldine and fellow sous chef Elaine Gardner of Dizengoff, going head-to-head with Wade Wright and Corey Richards of R2L. Eschewing team names this time in favor of referring to each team as Serial Killer One and Serial Killer Two (for this, we have Jason + Fireball + the shameless use of middle names to thank), we were off. As per Open Stove protocol, the first course was prepared in advance by each chef. Ferrari brought us a chicken liver mousse dumpling, while Wright made a pretzel chip with ramp remoulade and golden tilefish head cheese. A few bites and a few shots later, out came the first round of secret ingredients: Steak-house inspired, the contestants were given all the ingredients for a classic wedge salad (iceberg lettuce, cherry tomatoes, bacon, red onion, and blue cheese) and told to make anything other than a salad. Because that’s just how we roll. Extra points were awarded for the use of more than one secret ingredient.

Ferrari went big, grabbing the lettuce, tomatoes, cheese, onion AND bacon for his dish, while Wright opted for a more modest usage of the blue cheese, tomatoes, and onions. Results? Serial Killer One created a “gluten-free taco” (still unclear if this broke the salad rule): iceberg lettuce with a mix of Aldine’s house yogurt and the blue cheese, octopus in Harissa seared in bacon fat, topped with the red onion and green garbanzo beans. 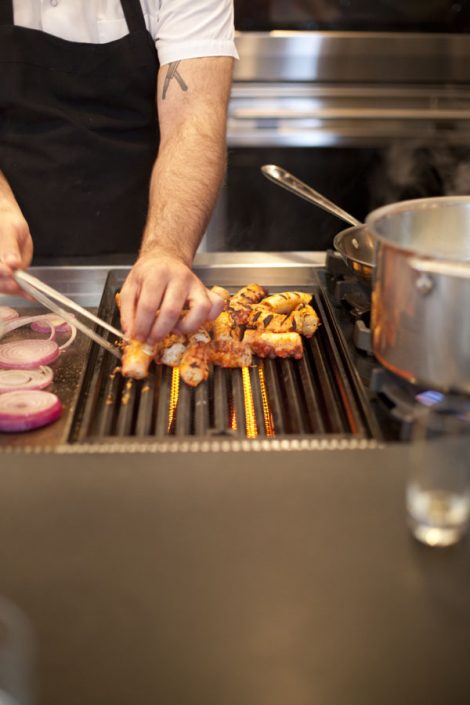 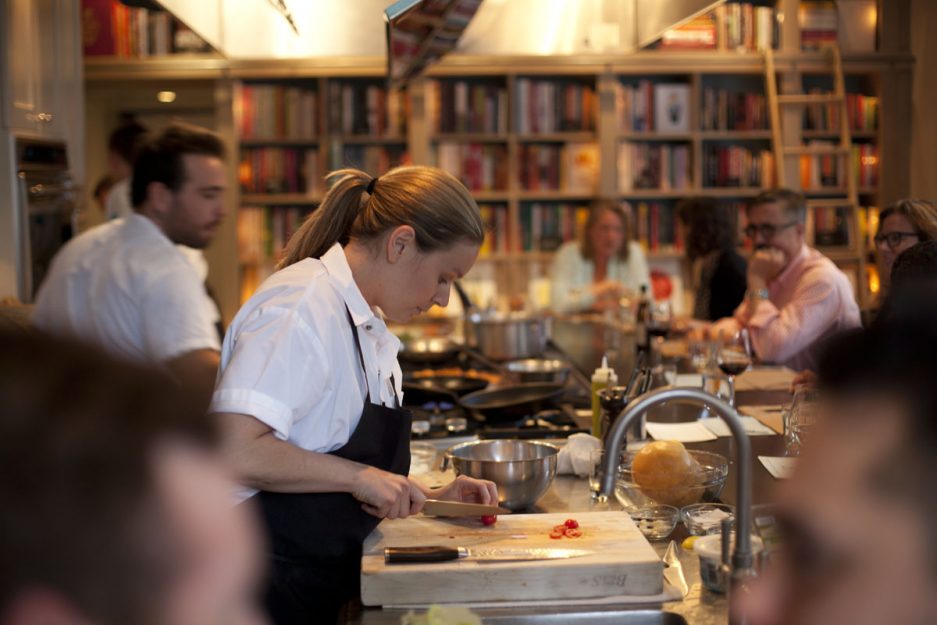 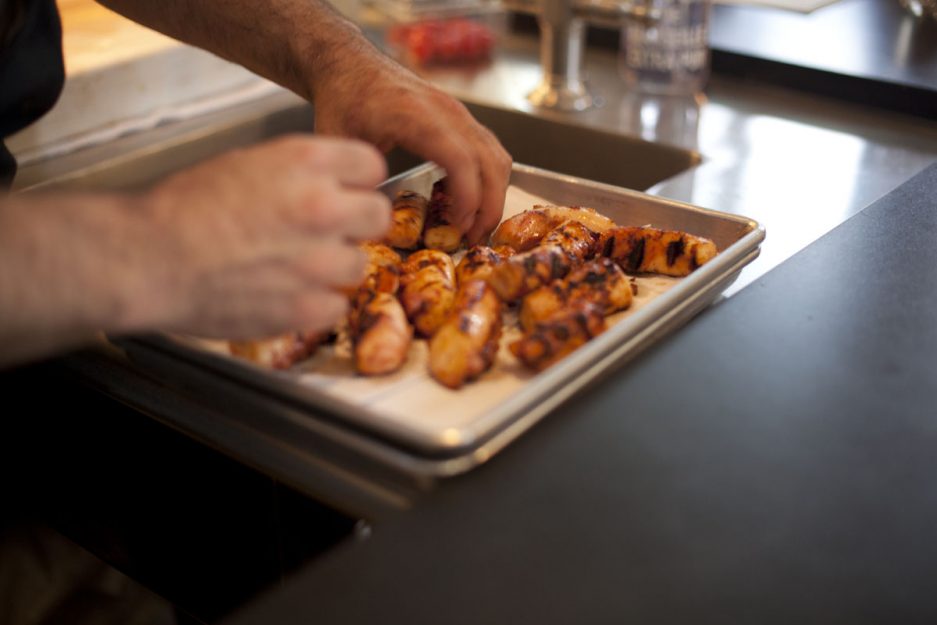 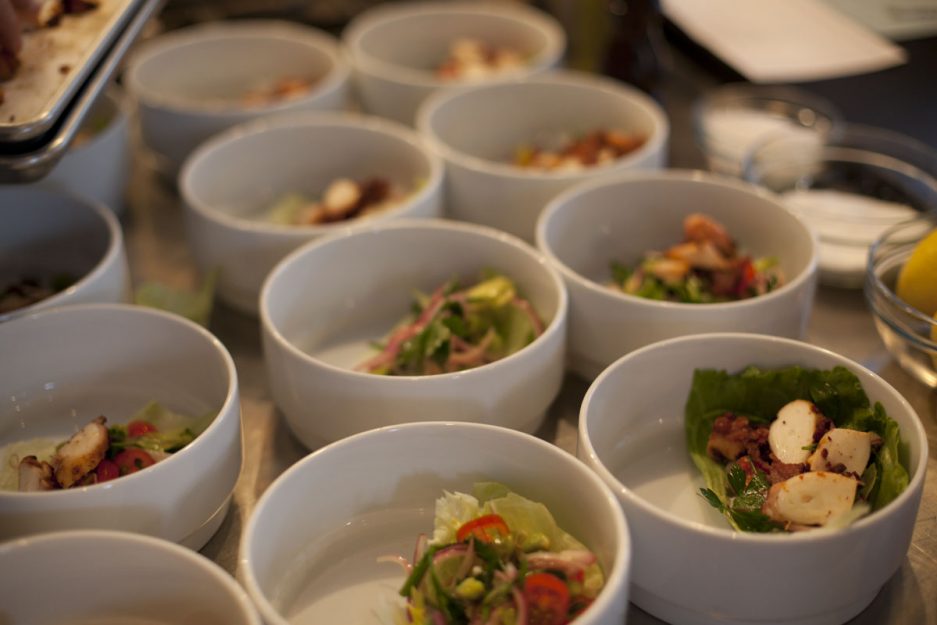 Salad, or gluten-free taco? You be the judge.

Over in Serial Killer Two’s corner, Wright stayed away from the “lettuce cup action” in favor of a blue cheese and tomato base topped with green and white asparagus, duck pancetta and shaved, cured foie gras. We’re pretty positive this doesn’t count as a salad. Thus began round two. Secret ingredients were brought out: Revealed: Beer and Mushrooms (and some of the prettiest darn mushrooms if you ask us). With 25 minutes on the clock, the teams kicked off.

While the chefs played with fire and raced against a time-clock that we may (or may not) have remembered to set, we paused for trivia. After a quick lament for the crowd’s lack of Strange Brew knowledge, we instead jumped to Animal House, and doled out the trivia hats. Yes, we got a little distracted. Still, course three proved to be the most competitive of the night.

From Ferrari’s stove, seared confit rabbit served with a cauliflower nutmeg purée and Aldine’s house-made mustard, topped with a grapefruit agrodolce de-glazed with Saison and mushrooms a la plancha. One of the guests loved Ferrari’s mustard so much she convinced him to let her take the whole bottle home.

Yet, even with the well-praised mustard, from Wright’s stove came the champion dish of the night: dry aged lamb with pioppino mushrooms, lamb stuffed morel mushrooms, a spring succotash of English peas, fiddlehead ferns, and maitake mushrooms, served with a mushroom purée made with the Chocolate love stout.

Some may have referred to this dish as a “lamb-slide,” and it elevated Team Serial Killer Two as we turned to the final quarter. 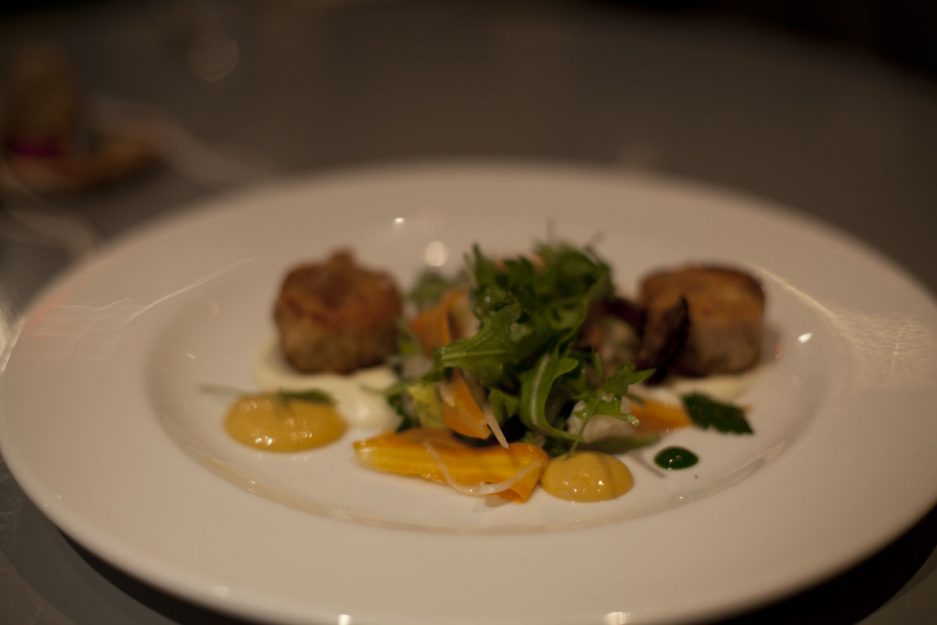 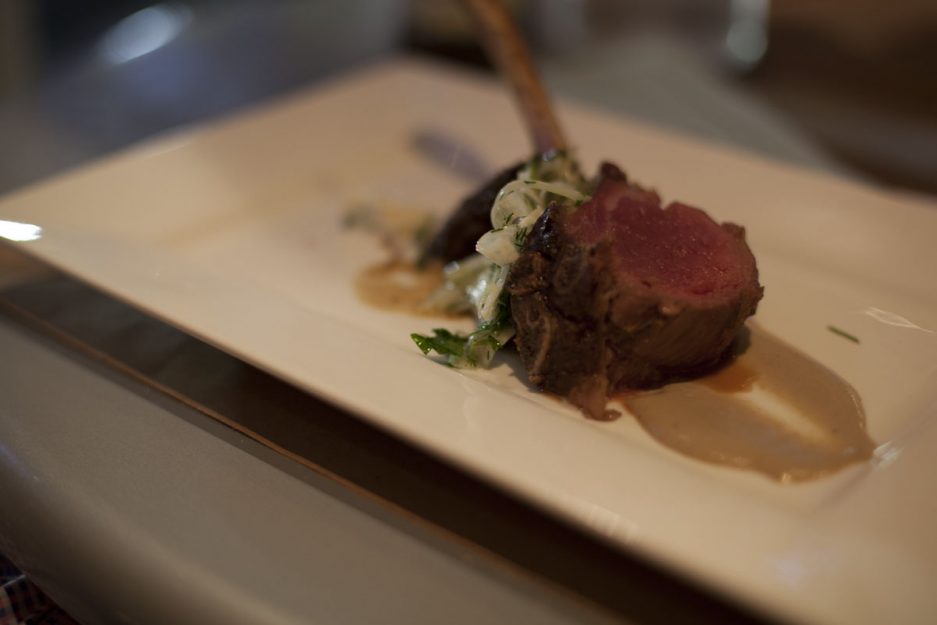 Having battled through the surprise ingredient rounds, both chefs had their own choice for dessert. While they plated, we took a break for another round of trivia and a moment of digestion amidst a few guest appearances: Ferrari’s fan club cheered him on from outside the window, and… Georges Perrier stopped by to get a look at the ruckus going on inside. Here’s hoping he got a good look at the hats.

For dessert, the contestants both came out strong. Wright: roasted and de-glazed strawberries, macerated strawberries, and a strawberry sorbet served with a thyme cornbread topped with thyme oil (and he tried to tell us he doesn’t make dessert). There is, however, always a winner, even if there are also tiny hats and fun and games (we live in a cruel, cruel world). For this open stove, the Beer Week Steak House title went to Wade Wright of R2L.