Steve Nelson, a.k.a. “the Other Corner,” Has Truly Exceeded Expectations

Everyone talks about the play of Darius Slay (and they should), but Nelson, who signed a one-year deal in July, has really proven his worth. 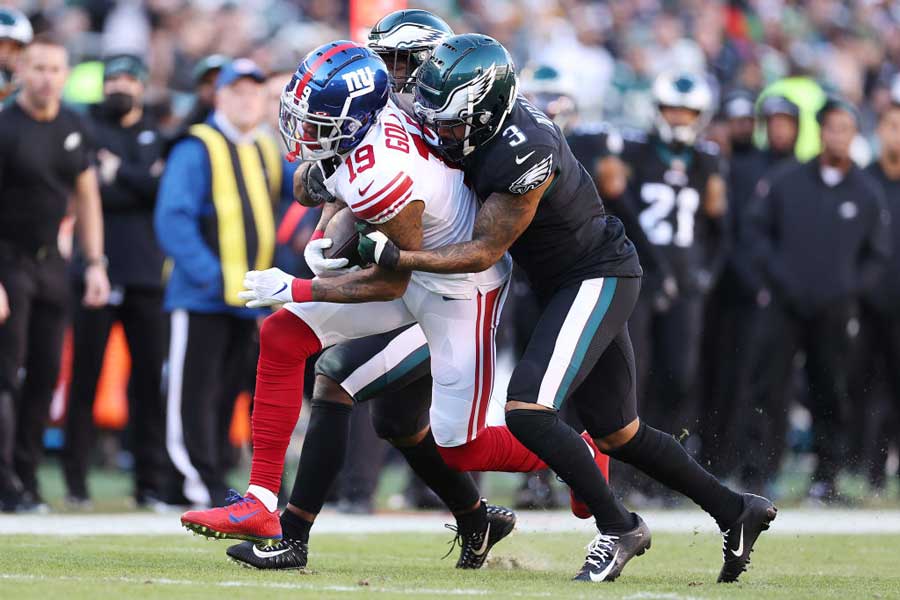 Steve Nelson tackles Kenny Golladay of the New York Giants during the second half at Lincoln Financial Field on December 26, 2021. / Photograph by Scott Taetsch / Stringer via Getty Images

Darius Slay has had an All-Pro level season, and some might say the only thing bigger than the Eagles cornerback’s play right now is his personality.

The always entertaining Slay has done it all this season for the 9-8 Eagles with three interceptions, nine pass breakups, five tackles for loss and, perhaps most importantly, three defensive touchdowns.

The result is an unexpected trip to Tampa to try to shut down Tom Brady and Mike Evans.

The man opposite Slay on Jonathan Gannon’s defense, Steve Nelson, is exactly that, the opposite of Slay but only when it comes to personality, not performance. The understated Nelson has thrived as the steady presence opposite the star.

The final free agent signed by GM Howie Roseman during the offseason, Nelson didn’t arrive in Philadelphia until July 25th, signing a one-year prove-it deal for just over $3 million.

It wasn’t the easiest pill to swallow for Nelson, who had starting experience in both Kansas City and Pittsburgh before being released by the Steelers.

Nelson was content playing the waiting game hoping to sign a deal near what he was scheduled to make in Pittsburgh, which was over $7 million. That market simply wasn’t there for Nelson, however — though he could have gotten a little more money than what the Eagles were willing to offer. What Philadelphia could provide that others couldn’t was the guarantee of a starting spot.

And playing time meant an opportunity to open some eyes and hit the free-agency market again in 2022 for Nelson.

Things have unfolded nicely for Nelson, who has again proven that he is a more-than-competent starting CB in the league and now will have a chance to shine against the best quarterback in history, in a playoff atmosphere, the eighth postseason game for Nelson in his career.

In fact, Nelson has been on teams that have made postseason runs during six of the seven seasons he’s been in the league since the Chiefs selected him in the third round of the 2015 draft out of Oregon State in 2015. That’s a trend, and one thing playoff teams aren’t known for is poor CB play.

“Steve’s done a great job in terms of coming in each day, being focused, just continuing to learn, work on his craft day in and day out,” safety Anthony Harris said on Thursday. “Then just having fun. What he’s been able to do for us in terms of playing opposite of Slay this year, he’s been very helpful. Also helping with the young guys, pulling everybody else along.

“I think he’s not really focusing on [anything] outside, whether it’s playing on a one-year deal or any other things of that sort. He’s really just focused on enjoying the game, enjoying the room that he’s in and everybody trying to work to be the best players we can be.”

The one-year deal is what it is, though, and one thing it contained was $375,000 in incentives if Nelson played 90% of the defensive snaps this season.

Nelson stayed healthy and was on the precipice of reaching that goal, but with a wild-card berth already clinched he and most of the other Eagles’ starters were rested for the regular-season finale against Dallas.

By missing all 62 defensive snaps in the game, Nelson’s playing time percentage dropped from 92% to 87%. The Eagles, understanding Nelson was ready to go if needed and likely would have easily hit his incentive absent a management decision, simply ripped up the provision and gave Nelson his $375K in the form of an extra signing bonus.

On Sunday, Nelson will be back out there opposite Slay — quietly doing his job.

“A great deal,” Slay said when asked what Nelson has meant to him and the defense this season. “Older guy, a leader, smart dude. We helped each other get better this year, for sure. He was a great addition for us. He did a lot for this team.”

Slay also went the public-relations route for his teammate.

“It’s sad to say, but when that time comes, I hope he earns what he deserves because he’s earned a lot of money right now for sure,” Slay noted. “He’s out there playing his best game, tackling well, covering well, he’s been a smart dude. He’s been a great addition to us, for sure.”

Nelson turns 29 on January 22nd, and the Eagles have a host of young corners on the roster, including rookie Zech McPhearson, who has spent the season as the top backup on the outside to both Slay and Nelson.

The market will determine if Nelson returns to Philadelphia next season, but he’s already outperformed his market value in 2021 and provided the Eagles the luxury of bringing along McPhearson slowly.