The Eagles Prepare to Take on the GOAT

Sunday's playoff game between Philadelphia and Tampa Bay will be Tom Brady's 46th, compared to the first for Eagles' quarterback Jalen Hurts. 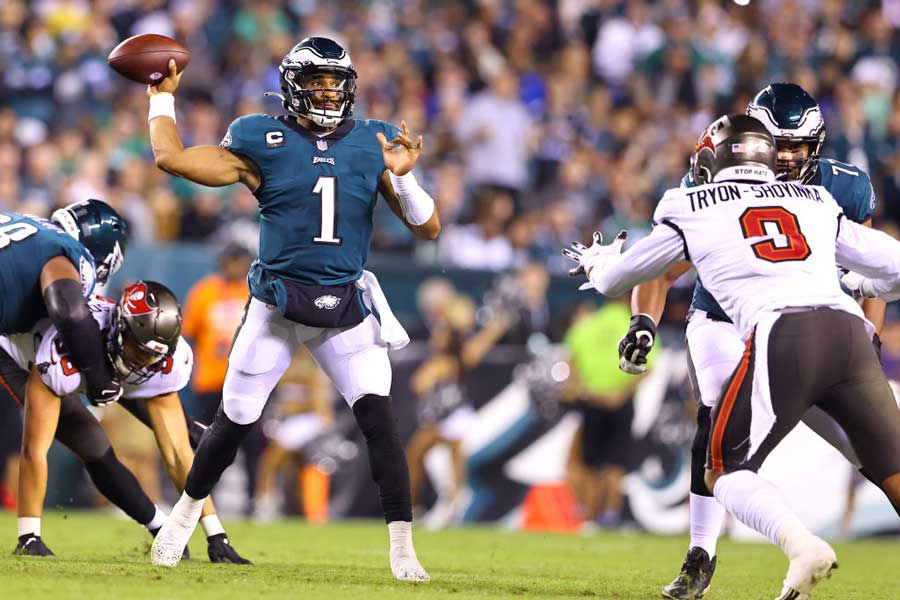 Jalen Hurts throws a second half pass against the Tampa Bay Buccaneers at Lincoln Financial Field on October 14, 2021. / Photograph by Mitchell Leff / Stringer via Getty Images

The WWE was in town on Monday night at Wells Fargo Center, and one of the bigger stars in pro wrestling these days is Becky Lynch, a so-called Irish Lass-Kicker who has such incredible presence over an audience that she successfully branded herself as “The Man.”

Lynch, whose real name is Rebecca Quin, strolled down to the ring for the national television taping in a glorious gold outfit emblazoned with the word “GOAT” on the back.

Lynch dubbing herself the greatest of all time in her profession isn’t necessarily a reach, but there are at least a few others in the conversation.

Over in the NFL, the conversation ceased a number of years ago, and the Eagles will be visiting the GOAT and his closest friends on Sunday in Tampa.

Philadelphia and its first-year defensive coordinator Jonathan Gannon already got a look at Tom Brady earlier this season when Father Time’s toughest opponent lit Philadelphia up during a 28-22 Week 6 Bucs win at Lincoln Financial Field. The veteran finished 34-of-42 with a mind-numbing 81% completion rate that has been the signature indicator of poor performance against good QBs for Gannon’s defense as a whole.

Perhaps the best indicator of Brady’s greatness is the dichotomy between him and the Eagles’ starting quarterback Jalen Hurts, who will be at the controls for his first postseason game against Tampa Bay. Hurts only needs to play in 45 more to match Brady, who will take turn No. 46 against the Eagles.

More to the point is Brady’s success level. To go along with his record seven Super Bowl championships, Brady is 34-11 in the playoffs as a starter, an unbelievable .756 winning percentage against the best competition the league has had to offer.

At 44, Brady has changed over the years. However, an ultra-quick release time to go along with his next level pre-snap processing skills are the main tools when it comes to staying healthy as an older man in a young man’s game.

“After game-planning these last couple days here, we know that it’s very hard to get to him but feel like we’re up for the challenge and got some things that we’re going to try to do,” Gannon said Tuesday during his weekly press briefing.

Helping Philadelphia will be the absence of two of Brady’s top playmakers at receiver, third-down stalwart Chris Godwin, who tore his ACL in Week 15 after compiling over 1,100 yards by then, and the recent release of the enigmatic Antonio Brown, who was a big part of Tampa’s win in Philadelphia earlier this season.

None of that stopped Brady from compiling a career-high 5,316 passing yards and 43 touchdown passes while leading the second-ranked scoring offense at 30.1 points per game.

The secret is getting everyone involved, according to Gannon — whether it’s the big names like Mike Evans or Rob Gronkowski down to the replacements for Godwin or Brown like Cyril Grayson or Tyler Johnson.

“I would say just from a global offensive perspective, the timing of their routes are very, very, very good,” Gannon said. “The distribution of their concepts is very good. The ball, obviously, comes out extremely fast; it’s on time. Tom is on the same page with all the receivers and the backs. They know how to adjust their routes based off coverage. When they call certain concepts, the spacing is spot-on, the timing is spot-on, and they execute at a high level. Their technique within that is very good.

“So, that’s what sticks out on the tape more than the people. We know they have weapons all over, but it’s the same page, and the continuity and the execution level is very high.”

The biggest problem might be Gronk, a four-time All-Pro and certain future Hall of Famer, because the Eagles’ defense has generally struggled to defend top-tier tight ends this season.

Gronkowski missed the Week 6 game against the Eagles with an injury but has really ramped up recently, snaring 14 receptions for 252 yards over the past two games.

“I mean, flat out, [Brady is a] guy, he’s a trained killer and he knows how to play good offense and what he needs to do to keep his offense on track,” Gannon admitted.