For Sirianni, coaching is a “relationship business.” 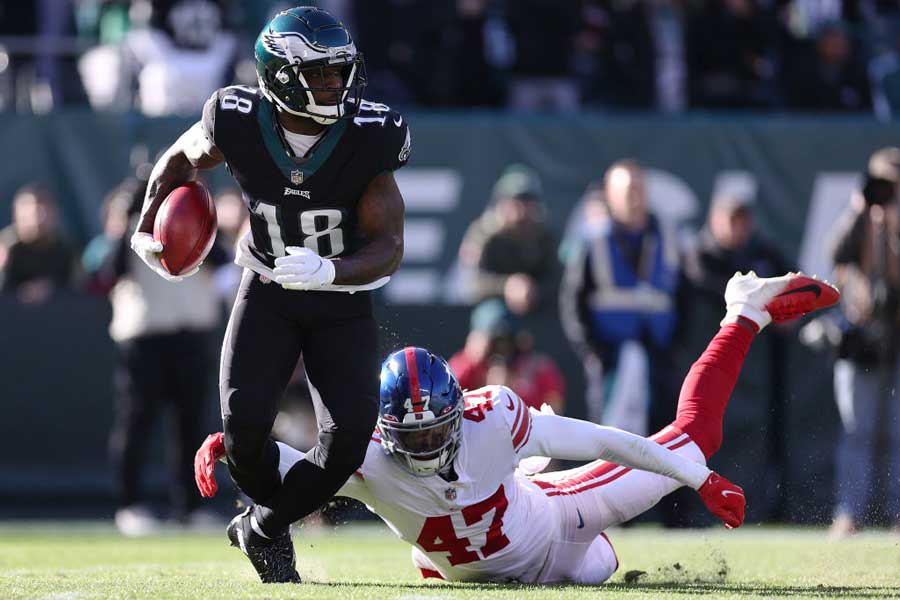 Jalen Reagor runs the ball ahead of Cameron Brown of the New York Giants during the first half at Lincoln Financial Field on December 26, 2021. / Photograph by Scott Taetsch / Stringer via Getty Images

As a 2020 first-round pick who has seemingly struggled since the day he arrived in Philadelphia, Jalen Reagor is not exactly a favorite of the fan base, which often laments the Eagles’ failure to evaluate superstar receiver Justin Jefferson correctly when seething about its own underachieving wideout.

It’s only gotten worse for Reagor recently after two-high profile drops that cost the Eagles a game against the woeful New York Giants in late November: There’s been persistent booing since when the team is at Lincoln Financial Field.

“It was funny, honestly,” Reagor said of the boo-birds Wednesday as the playoff-bound Eagles continued preparation for the regular-season finale against Dallas. “ … Derek Barnett just told me to embrace that type of stuff because, I mean, it shows they are paying attention.”

The idea is that hate is not the opposite of love (apathy is), and Reagor still has an opportunity to start rewriting his story each and every week — especially as the stakes continue to grow.

To that end, Nick Sirianni has attempted to keep Reagor on course by loving the struggling receiver up.

“I feel like he’s an even better person than people [who] just look at him like oh, he’s a coach,” Reagor said of Sirianni. “… When the fans were booing me, he was very upset about it. When I dropped the pass against New York, he was the first person to walk up to me. He walked me all the way through the tunnel and everything.”

Sirianni’s core values as a coach are displayed prominently in the Eagles’ practice bubble at the NovaCare Complex, and No. 1 is the idea of connecting.

When Sirianni was directed toward Reagor’s recent words by Philly Mag on Thursday, the coach seemed moved.

“Means a lot to me,” he admitted. “That means an awful lot to me that he said that and talked about that first because, again, connecting is so important to me. I’ve talked to you guys about this, like why is connecting important to me? Because it’s a relationship business. And why did I want to get into coaching in the first place?”

Why Sirianni wanted to get into coaching can be traced back to his family, specifically his dad Fran, a long-time successful high school football coach in Western New York.

“Growing up, I would see grown men come to my parents’ house just to see my dad because they’re back in town and … they had a connection with him,” Sirianni explained. “I always thought that was so cool and one of the main reasons I got into coaching.”

As Sirianni’s career began to take off and he reached the highest level, the NFL, the coach thought he might have to trade in one of his core values in a more business-like environment.

“I think when I first went to the NFL I kind of felt like, all right, I really want to be at the top of my profession and be at the top level, but am I going to be able to have the same relationships I had with guys in college — because I never coached high school?” Sirianni pondered. “I think the answer I found out very quickly was, yes, you can.”

And Sirianni is proving that with Reagor.

The environment is by design, and the trust has been earned.

Whether Reagor ultimately turns it around he’ll always be a part of Sirianni’s extended “family.”

“You develop these connections if you work at it,” the coach explained. “So that means a lot to me that he recognizes that. Means a lot to me that me and him are tight because I’m tight with a lot of the former coaches that I had. I think that’s always a great feeling to have, that 15 years from now I’m still going to text these guys.”