Eagles vs. Washington Football Team Part Two: By the Numbers

The Eagles' defense looks good on paper but context needs to be added and Paul Domwitch gives it to you. 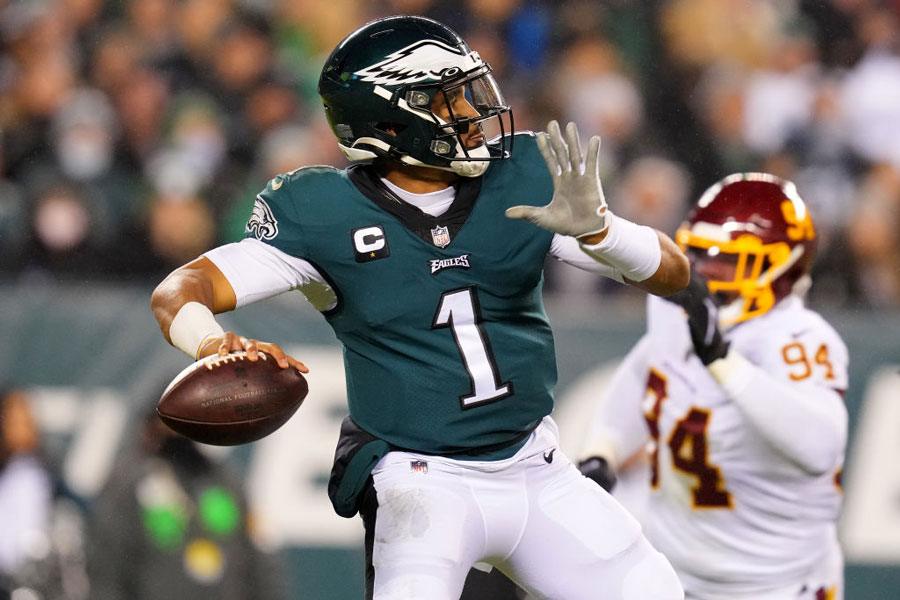 Jalen Hurts throws a pass during the second quarter against the Washington Football Team at Lincoln Financial Field on December 21, 2021. / Photograph by Mitchell Leff / Stringer via Getty Images

The Eagles’ media relations department put out a tweet this week singing the praises of Jonathan Gannon’s defense. It listed eight defensive categories in which Gannon’s unit inhabit the top 10, including yards per game (5th), yards per rush (4th), 3-and-out percentage (4th), and defensive touchdowns (2nd).

But those numbers only tell a very small part of the story about the Eagles’ 2021 defense. While it has shown improvement in recent weeks, most of that improvement has come against offensive-challenged teams. General manager Howie Roseman knows better than anyone that Gannon’s unit is going to have to be rebuilt over the next year or two if the Eagles hope to be in the Super Bowl hunt on a regular basis going forward.

The Eagles have given up more than 18 points in just two of their last eight games, which is nice. But six of those eight games have been against offenses ranked 23rd or lower in scoring. The only teams they’ve faced since Halloween that are in the top 20 in scoring are the Chargers (8th) and the Saints (18th).

Here are some rankings that are a lot more revealing about the Eagles defense right now than the ones provided by the team’s publicists:

The Eagles defense had the misfortune of facing many of the best quarterbacks in the business in the first nine weeks of the season. Everyone knows how that went. The Cowboys’ Dak Prescott (80.8), the Chiefs’ Patrick Mahomes (80.0), the Bucs’ Tom Brady (80.9), the Raiders Derek Carr (91.2), and the Chargers’ Justin Herbert (84.2) all completed more than 80 percent of their passes against the Eagles.

Since then, well, the quarterback talent the Eagles have faced in their last six games – Teddy Bridgewater, Taysom Hill, Daniel Jones, rookie Zach Wilson, signed-off-the-street Garrett Gilbert, and Jake Fromm – has been considerably easier to deal with. Bridgewater & Co. have a plus-6 touchdowns-to-interceptions differential this season. Prescott, Mahomes, Brady, Carr, and Herbert: plus-92.