Arcega-Whiteside Perseveres in a Different Role

J.J. Arcega-Whiteside hasn't developed into the receiver the Eagles hoped for, but he's found other ways to contribute. 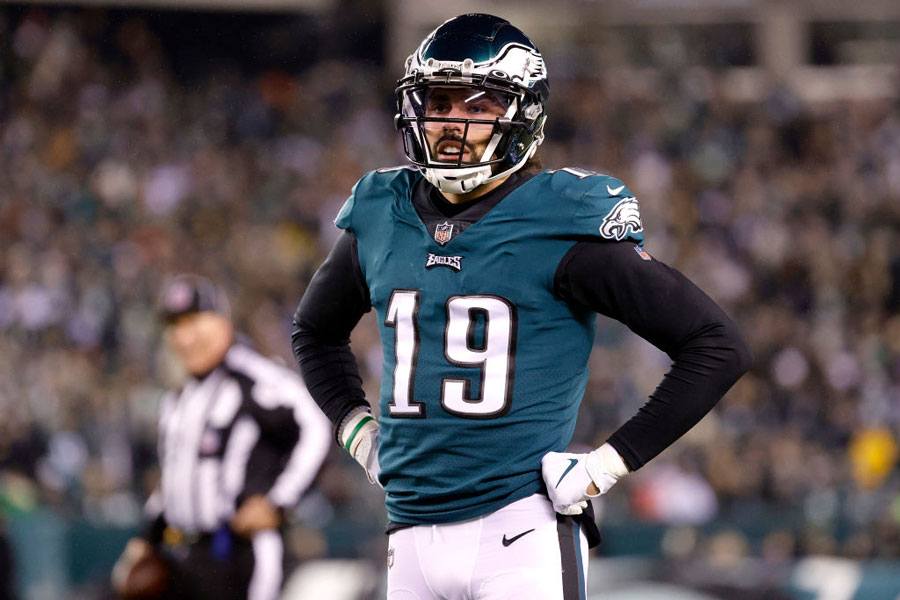 J.J. Arcega-Whiteside reacts after a penalty during the second quarter against the Washington Football Team at Lincoln Financial Field on December 21, 2021. / Photograph by Tim Nwachukwu / Staff via Getty Images

When you’re playing a poor football team like the New York Giants forced into the desperation of plying Jake Fromm at quarterback, the last thing you want to do is give the team hope.

Kenny Gainwell, recently put into the unfamiliar position of kick returner due to the ineffectiveness of Quez Watkins and Jalen Reagor when they had the role, settled under the opening kickoff this past Sunday and moved upfield before reaching a sea of bodies near the 20-yard line.

And just like that belief materialized for the Giants when the football was dislodged but only for a split second before J.J. Arcega-Whiteside gobbled up the potential turnover.

Order was quickly restored for the Eagles and things went to plan. The Giants were bad, Fromm was overmatched, and Philadelphia easily disposed of its division rivals, 34-10, inching ever closer to what seemed like an unlikely playoff berth back in September.

It’s not the role Arcega-Whiteside or the Eagles envisioned when the Stanford product was taken at No. 57 overall in the second round of the 2019 NFL Draft but the lengthy WR has developed into one of Michael Clay’s best special teams players.

“He really puts in the time and effort to study who he’s got on the holdups, who he’s got blocking on kickoff return,” the Eagles’ special teams coordinator said when discussing JJAW Tuesday. “What’s the return coming at him right there? How can I get better? How should I take on this block? He just asks the right questions and he cares about making big plays right here.

“I think he’s done a great job, in terms of being a bigger wide receiver, bringing a little bit more of a physical presence.”

During his first two pro seasons, Arcega-Whiteside barely played on special teams as the Eagles attempted to make him a bigger part of the offense.

Injuries and ineffectiveness had most affixing the term “bust” to JJAW’s name and it’s hard to argue that when it comes to the original evaluation of a big WR with ball skills who could dominate on 50/50 balls and be a difference-maker in the red zone.

That said, most players in that kind of circumstance would not embrace a significant role on special teams or as a blocker for others on offense but to Arcega-Whiteside’s credit he has.

Not only was Arcega-Whiteside “Johnny on the spot” when it came to Gainwell’s fumble against the Giants, he also sprung Reagor’s 39-yard punt return with a big block, and snuffed out a Giants’ kick return with a tackle.

“J.J. is on the interior and he puts his foot in the ground and he helps out, kind of create an open lane, him and Jared Mayden,” Clay said when describing Reagor’s explosive return. “And J.J. kind of took out two people. He took a charge on the gunner and blocked his own guy, and that’s where the lane kind of opened up for Jalen.”

On offense, he’s excelled as a blocker helping the Eagles’ No. 1 ranked rushing offense and Nick Sirianni’s vast array of WR screens.

“And I saw J.J. do that very well and very efficiently. And we didn’t just throw him out there to do that because we didn’t have a feel that he was going to do that. He’s been showing that to us every single day in practice.”

The ship has probably sailed for Arcega-Whiteside in Philadelphia when it comes to becoming an impactful WR but with one year left on his rookie deal, JJAW has secured the full length of his rookie contract in Philadelphia by persevering, accepting, and excelling in a different role.

“J.J. has done a heck of a job in terms of embracing his role and he’s really contributed a lot to help our special teams unit,” Clay said.