Many around the NFL have taken notice of the Eagles' unexpected run toward the postseason. 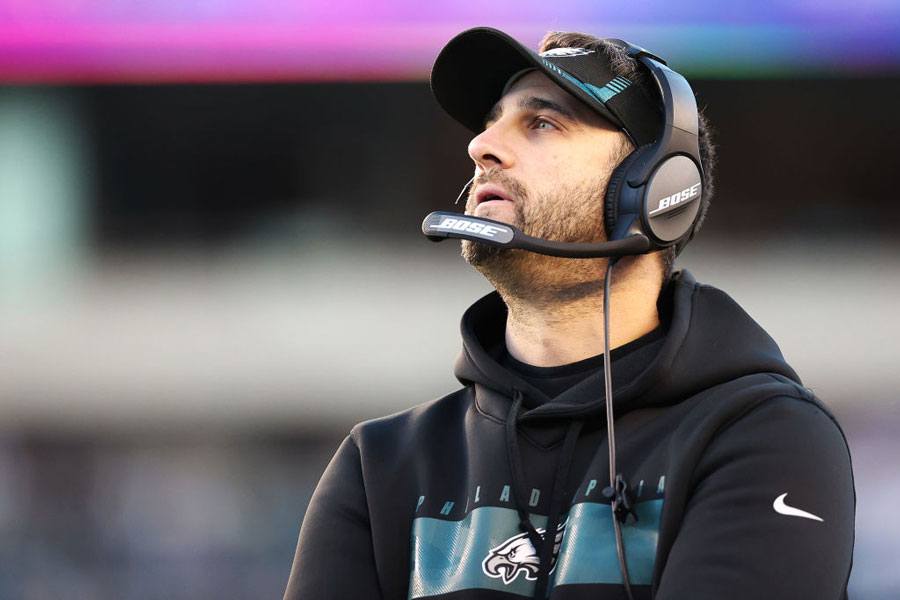 Nick Sirianni looks on during the fourth quarter against the New York Giants at Lincoln Financial Field on December 26, 2021. / Photograph by Scott Taetsch / Stringer via Getty Images

The NFL made a slight tweak to its annual coaching carousel this year, implementing a one-year trial period which allows teams with head-coaching vacancies or those who’ve informed their current mentors Week 18 is it for them the opportunity to interview potential candidates from other teams in-season beginning Tuesday at 8 a.m.

The goal is to eliminate what has been a punishment in the past for qualified candidates from good teams who make deep playoff runs: the urgency to make decisions quickly as perceived “hot” options were plucked off the board. Under the previous system, teams with coaching vacancies couldn’t interview candidates until after their seasons concluded.

Right now only two teams have moved on and are eligible for the head start: Las Vegas and Jacksonville.

With HC interviews set to start soon, a good emptying notebook convo on @GMFB with @TomPelissero … The 6 names we mentioned:

Gannon, 38, has piloted an Eagles’ defensive unit that got off to a slow start but is now top 10 in nearly every meaningful defensive category and he’s the young, energetic type who communicates well that is en vogue around the NFL.

Head coach Nick Sirianni was asked about his defensive chief and thought about making a joke downplaying Gannon’s success before thinking better of it and admitting what others around the league already know anyway, Gannon is a future head coach.

“I think Jonathan would be an awesome head coach,” Sirianni admitted. “I really wouldn’t want to make a joke right there and be like, ‘He’d be terrible,’ because I really want to keep him here because I think so highly of him.”

While Gannon isn’t as aggressive as what many Eagles fans would like, especially older ones who remember Buddy Ryan never mind Jim Johnson, many who fit into that category also don’t factor in the context of how the modern game has changed and is now played.

Any Eagles defensive coordinator from the past would be lauded for what Gannon’s unit has accomplished through 15 games with two to play and a potential playoff spot just waiting to be stamped when measured against the other 31 teams.

Others around the league, however, see the success and that means interest will follow.

It’s the nature of the beast in the NFL. Former Eagles coach and future Hall of Fame mentor Andy Reid is already legendary for his coaching tree and when the Eagles won Super Bowl LII with a head coach picked from that tree, Doug Pederson, the organization was quickly pilfered of offensive coordinator Frank Reich, who became the head coach in Indianapolis and quarterbacks coach John DiFilippo, who got the offensive coordinator job in Minnesota.

“Obviously, when people on your staff and people in the building are getting opportunities like that or get mentioned like that, that means you’re doing some good things,” Sirianni said. “And so that’s the plan. That’s what you always want as a coach, for your coaches to get the opportunities because you’ve been doing well.”

A rookie head coach himself Sirianni obviously craves success but probably didn’t think the wolves would be circling so soon. Offensive coordinator Shane Steichen’s name has also been mentioned in some cursory potential search lists compiled around the league.

Sirianni was asked earlier this week how to handle the situation as the Eagles try to put a positive punctuation mark of what was once deemed an unlikely run toward the postseason.

“The way I would handle it is similar to kind of – I guess I go back to those situations I went through,” he surmised. “I always wanted to make sure, obviously, that I got my work done for the team that I was currently working for before I did anything to get ready for any head coaching opportunities.”

Sirianni then remembered his first potential opportunity in 2018 when another team wanted to talk with him and it conflicted with his game prep.

“My suggestion to our coaches has always been to make sure you’re ready before the season even starts for your head coaching opportunities,” Sirianni said. “Again, because this is an experience that I was able to go through. That way when you’re in the season, your sole focus is on winning that football game and doing what we need to do to help the organization we’re in now.”

“So, that’s my message to these guys.”