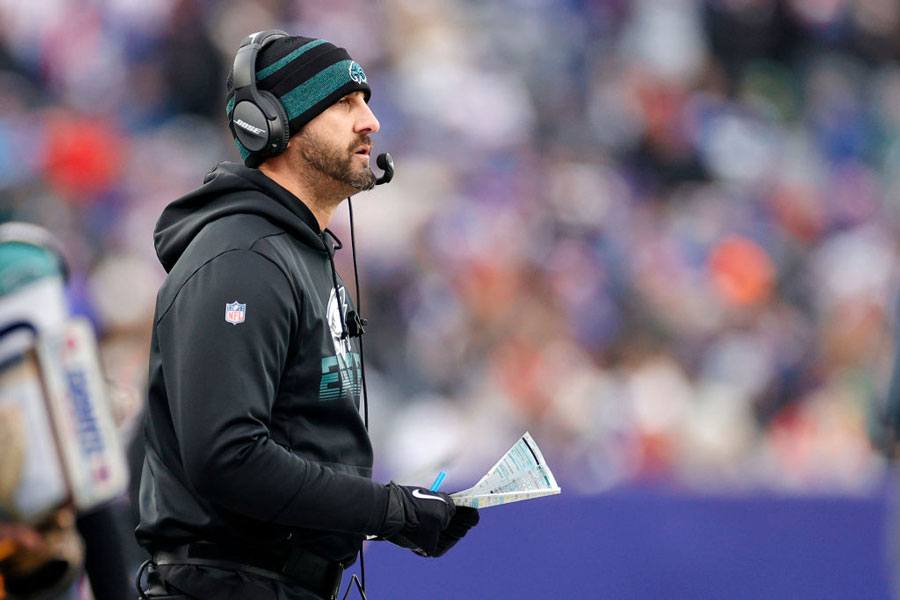 Nick Sirianni looks on from the side line during the game against the New York Giants at MetLife Stadium on November 28, 2021. / Photograph by Sarah Stier / Staff via Getty Images

The excitement of a rare “Victory Wednesday” was dampened for the Eagles when Nick Sirianni revealed that he had tested positive for COVID-19.

The Eagles head coach said he felt fine during the Eagles’ 27-17 win over the Washington Football Team on Tuesday night, but admitted that “I wasn’t feeling great” by Wednesday morning, and self-reported some symptoms that sparked a test and the confirmation that he contracted the virus.

Speaking from a hotel room where he has quarantined himself, Sirianni said he is already feeling better and will handle all of his duties virtually in the hopes of coaching Sunday afternoon against the New York Giants.

If Sirianni is unable to be cleared in time, passing game coordinator Kevin Patullo will take over most of the head-coaching responsibilities on game day with the exception of offensive play-calling, which would fall to offensive coordinator Shane Steichen.

“I’m feeling OK, I’m feeling a little bit better now, which is good,” Sirianni explained. “The rest of the week, I’ll be in every meeting, obviously virtually … I’ll be running those. Just business as usual.”

Patullo is the team’s passing game coordinator and, in many ways, the coach’s right-hand man.

“Kevin Patullo will do all the [game management], whether we’re going for it on fourth down, different situations like that, the coin toss, this and that,” Sirianni explained. “The reason that I went with Kevin there — [Eagles Running backs/Assistant Head Coach] Jemal Singleton will help with things as well, but the reason Kevin will be in charge is because Kevin doesn’t have a position to coach. Kevin helps with a lot of different aspects throughout the game. I want there to be as little change as possible. I don’t want Jemal to have to think about that while he’s coaching a position.”

“So, Kevin is involved in all those conversations of coin toss and going for it on fourth down, as it is anyway. So, it’s just a natural transition there for Kevin to be able to do that.”

The Eagles didn’t practice Wednesday but did release an estimated injury report, which revealed that left tackle Jordan Mailata is dealing with an ankle injury and running back Miles Sanders now has a quad issue and would have been held out had Philadelphia hit the practice field.

The team will hold a walkthrough practice Thursday and practice Friday, sessions that are set up to run themselves, according to Sirianni.

“Well, practice runs itself really to be 100% honest with you. You blow the horn, go period to period. I’m not a big talker, to be honest with you. After, I talk to them a lot in team meetings. I talk to our guys a lot in team meetings,” the coach said. “Breakdowns normally go, ‘Hey’ — I may say one thing, but normally I’m like, ‘Hey, [T] Lane [Johnson], break us down.’ So, players will break us down as normal.”

“So, business as usual.”

Eagles defensive coordinator Jonathan Gannon noted that the coaching staff had many contingency discussions dating back to when the group was first cobbled together.

“It’s exhausting how much we talk about this, honestly, but you have to do that,” Gannon said. “What if this happens? Plan A, Plan B. Who’s doing what? What are we doing? How we are handling the players’ meetings?”

“It’s expect the unexpected, and Nick has done a good job since we got here because we’re still kind of in this world that we’re living in. ‘Hey, here’s what we are going to do when these things happen,’ and feel good about the plan in place.”

The Eagles have three offensive linemen — left guard Landon Dickerson and backup tackles Andre Dillard and Le’Raven Clark — on the reserve/COVID-19 list in recent days with the latest being Clark on Wednesday, but Sirianni didn’t want to get into the hypotheticals of a possible outbreak as cases of the Omicron variant explode nationwide.

“We took a lot of precautions as far as last week and last couple of weeks … knowing that this was getting (bad),” Sirianni said. “The pandemic was getting more and more — I don’t want to say serious because it’s always been serious — just the spread was more rapid. That doesn’t mean that you’re not going to have an outbreak. But I’m not going to play a hypothetical there. I feel like we’ve done the right things.”