Predictions Are Great for Eagles But WFT Attrition Is Real

The Eagles want a golden ticket to the playoffs, and they have been handed the golden opportunity of attrition suffered by the Washington Football Team. 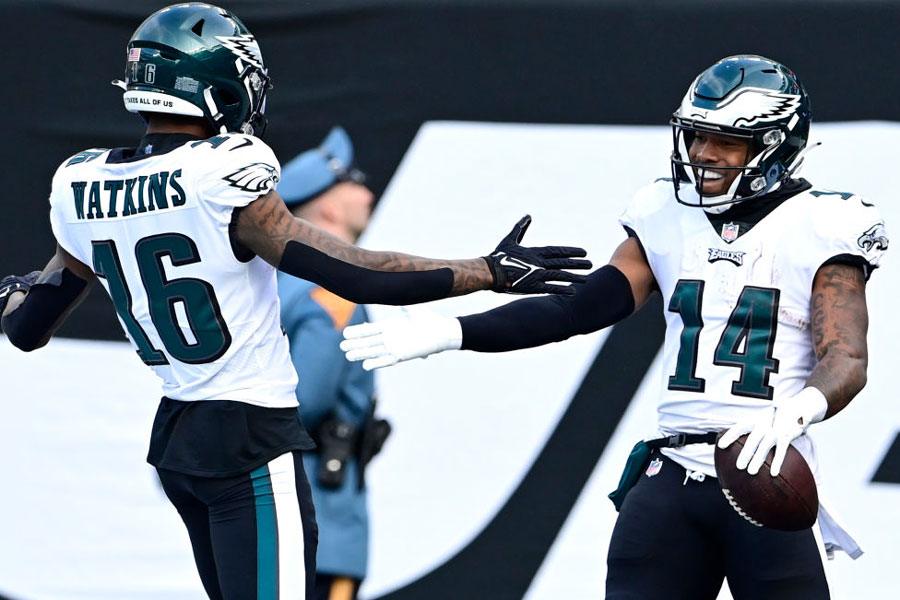 Kenneth Gainwell celebrates his touchdown with Quez Watkins during the second quarter against the New York Jets at MetLife Stadium on December 05, 2021. / Photograph by Steven Ryan / Stringer via Getty Images

Sunday’s game between the Eagles and Washington Football Team isn’t a play-in game for the final NFC playoff berth, but it may be a play-out contest if you believe the predictive models that are all the rage in national politics.

The scorecard says that five teams in the parity-driven NFL are at 6-7 and vying for Willy Wonka’s final golden ticket to the chocolate factory that is the postseason.

A snapshot in mid-December is exactly that and little more, essentially meaningless with four games to play for each team in the mix, which will move forward against different opponents under divergent circumstances.

So, even though the WFT still is clinging onto that last playoff spot even after a 27-20 loss to NFC East-leading Dallas on Sunday, the Eagles are actually the clubhouse leaders to be the final participant, according to Fivethirtyeight.com, the famed Nate Silver-fueled prediction website.

Per Fivethirtyeight.com, the predictive model entering into Week 15 is a little different than the current snapshot with Nick Sirianni’s Eagles having the inside track for the final berth:

The remainder of the Eagles’ schedule is what gives them a leg up, and it starts Sunday against a banged-up and COVID-19 riddled WFT.

Per Fivethirtyeight.com’s predictive model, a Philadelphia win over Ron Rivera’s team would spike the Eagles to over 50% when it comes to the likelihood of making the postseason. A setback, however, would plummet the Eagles to crossing their fingers at 11%.

The New York Times’ own prediction model is a little more conservative in its approach, putting the Eagles’ chances of making the playoffs at 28% entering Week 15. But where both models agree is on how important the actual game is on Sunday for both teams. The NYT has an Eagles’ win bolstering their chances of extra football to 43% and a loss collapsing things to the same dire level of Fivethirtyeight.com at 11%.

What should tilt all of those numbers even more toward the Eagles is what Washington is going through.

The NFL as a whole was hit hard by COVID-19 positives on Monday in the form of 37 positive tests, according to a league source. Two of those positives were Eagles players: starting receiver Quez Watkins and practice squad running back Jason Huntley.

That was doubled by the WFT, however, with star defensive tackle Jonathan Allen being the headliner of a list that also included linebacker David Mayo, rookie defensive end William Bradley-King, a PS player who was elevated as a COVID-replacement player in Sunday’s loss to Dallas, as well as practice squad tight end Temarrick Hemingway.

Washington now has nine players on the COVID-19 list overall, all of them added over the past week, and is in the league’s advanced protocols.

More so, the WFT was further depleted by traditional injuries against the Cowboys, losing center Tyler Larsen to a torn Achilles while crossing its fingers that top playmaker Terry McLaurin can make it through the concussion protocol in a week, and starting quarterback Taylor Heinicke can navigate knee and right elbow issues that forced him to the sidelines against the Cowboys.

Predictions are great but attrition is real.