By the Numbers: The Eagles’ Bye Week Edition 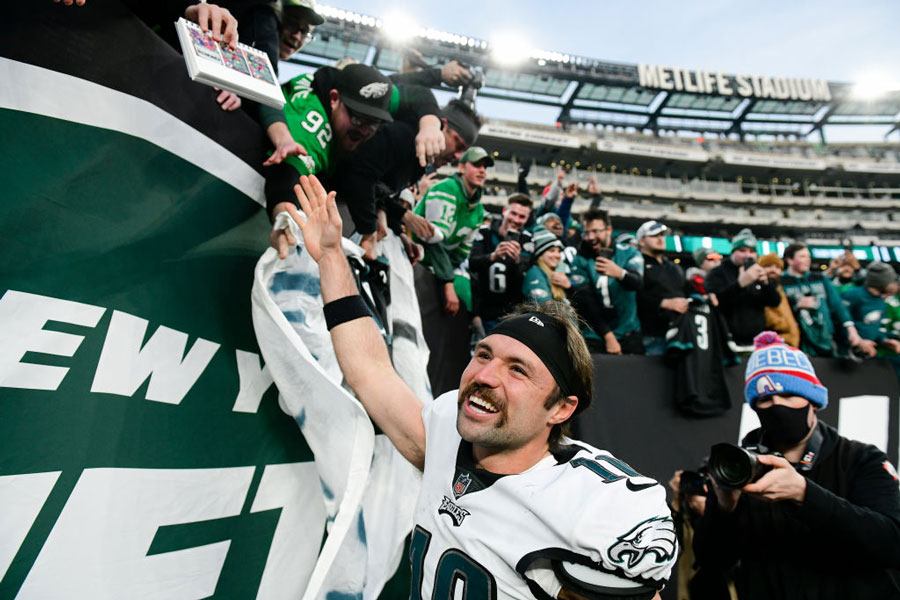 Gardner Minshew celebrates the team’s win against the New York Jets with fans at MetLife Stadium on December 05, 2021. / Photograph by Steven Ryan / Contributor via Getty Images

Before the Jets game last week, we used part of this space to discuss Nick Sirianni’s preference for three-wide receiver 11-personnel. So, what does the shrewd first-year Eagles coach do? He throws the Jets defense a curveball and attacks them with a heavy dose of 12- (two tight ends) and 13- (three tight ends) personnel packages.

Tight end Dallas Goedert had his best day as a pro against the Jets, catching six passes for 105 yards and two touchdowns. The 105 yards were a career-high. It also was his first two-TD game.

Four of Goedert’s six catches and 68 of his 105 receiving yards Sunday came with 12P. In the Eagles’ first 12 games, 24 of Goedert’s 35 receptions came in one-tight end, three-wide receiver 11P. In the previous eight games, he had just five catches with 12/13P. His 36-yard first-quarter touchdown pass against the Jets was with 12P.

Twenty-one of their 41 rushing attempts (for 91 yards) were from under center, including 11 of Miles Sanders’ career-high 24 runs and Kenny Gainwell’s 18-yard second-quarter touchdown run. Sanders averaged 4.1 yards per carry from under center and 5.8 out of shotgun. Minshew attempted five passes from under center. He completed four for 76 yards, including Goedert’s 36-yard first-quarter TD catch.